I finished laying track at Falmouth this morning. The next step is to remove the flex track and plywood that is currently standing in for the long trestle. Then I can start building the actual parts of the bridge. But before I do that I need to decide where the abutments will be and how they are made. I assume that the original abutments were built by the RF&P so they will be stone. 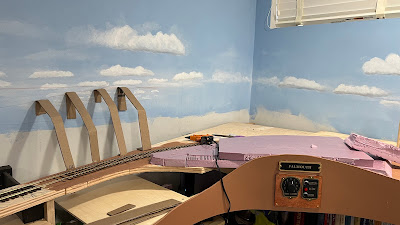 The terrain in this area is somewhat complex. The trestle cuts across a bend in the creek. The south end  of the bridge is especially hard to visualize. So I decided to add the basic terrain shapes there first. Once they are established that will determine where the abutments will be precisely located.

In the foreground I used pieces of foam. I used cardboard web for the hill in the rear.  That's too big of an area to try to use foam.

I tacked the balloon on the wall to get a look at how it will appear. It is kind of a scene stealer.  The final vignette will show the ground crew getting the balloon ready for a flight.

My wife was wrong...

I did use that piece of wood I was saving for 10 years just in case I needed it. But I'm getting ahead of myself.  I have been  laying and spiking track pretty diligently in the past few days. I now have all the turnouts and almost all the track installed. I just need to add one engine  storage track off the turntable and to replace the flex track on the bridge with hand laid track and I'll be done with track. Yes, there will still be several thousands spikes to go but the track will be useable.
With the track done, the next step was installing the turntable. I am reusing the turntable from the old Falmouth. I was able to disassemble it and save it. The trick was finding a place to fit in the new plan particularly to avoid the benchwork. I had to work around the Ikea legs and a joist that was screwed to those legs. I also did not want the electronics from the bottom of the turntable to interfere with the view of the TV under the benchwork. I decided to install the turntable at the far left end of the lead to the engine terminal. There will be just one storage track and that is a reverse move off  the turntable. That arrangement spreads the engine service facilities along the turntable lead. I think it looks good and allows me to access the turnout switch stands behind the turntable lead without interference from the water tank or workshops.  It also makes the run to the turntable longer. To use the existing turntable base I had to cut the plywood the turntable was formerly mounted on. This was tricky as the existing electronics for automatic reversing and hub for the turntable extended below the bottom of that piece of plywood. So I could not just place the base of the turntable on my MFT and cut away. Instead, I set up my saw horses and used some scraps of plywood that I have been saving for years for a job like this. They raised the plywood base off of the deck and allowed me to use my track saw to cut nice straight lines to trim it. I knew those wood pieces would come in handy!Next I had to cut the hole in the existing plywood bench top for the turnable. I aligned everything as precisely as I could and drew lines for the center line of the track. I took care to avoid the Ikea legs under the table top. I drilled a half inch hole on the plywood table top to accept the turntable axle. Then I used the turntable spinning in that hole as a trammel to mark the circle necessary for the pit. I added a half inch to the radius to allow room for the wooden retaining wall. Then I used my Carvex saw with a fine blade to cut the circle.

I had to notch one corner of the turntable base to fit around the Ikea legs, but the turntable popped right into place. Four screws pulled the turntable tight and secure. I must say it was gratifying seeing the turntable installed in the pit and even with some existing ground cover on the pit floor.

I installed railroad ties around the pit wall to act as a retaining wall. The ties give the pit a rough and temporary look perfect for a military structure.

I put a quick coat of paint on the fascia and its starting to look like something. The new Falmouth with its long sidings and greater track capacity should allow more involved  operations. Plus, I think it is going to look really cool.


Amby stopped by this morning to help finish the installation of the telegraph system. He ran the last cable to Falmouth while I finished building the panels for Brooke and Falmouth.   All went fairly smoothly except for me accidentally installing the Falmouth panel at Brooke. That was an easy fix. The Falmouth telegraph station is mounted on the curved section of the fascia near the balloon camp and north of the turntable. I needed to reinforce the curved fascia with a scrap of 3/4 inch plywood to flatten it out and stiffen it.
First I wet the fascia to allow it to bend more easily. Then I glued and screwed the plywood to the fascia. After a few hours it was ready for cutting the hole with the jig saw. 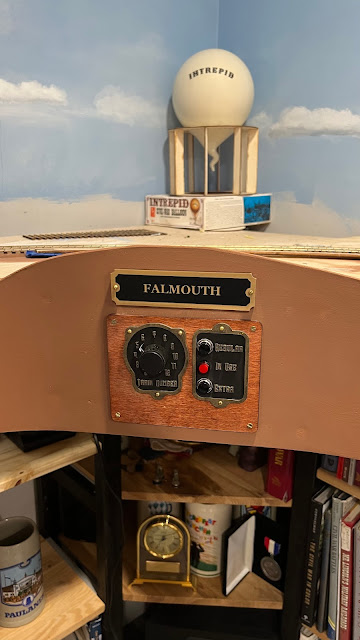 In between putty and paint drying I continued to spike track. Amby also took a crack at spiking. I did not sense a lot of enthusiasm from him for the task. I am not sure he will volunteer for more of  that activity.
Special thanks to Amby, Seth, and Steve for their help in getting this system designed and built, installed and tested.
With the telegraph done, now we need to get the track finished. Just about 5,000 spikes to go.

Email ThisBlogThis!Share to TwitterShare to FacebookShare to Pinterest
Labels: Telegraph

Time for a big push

I restarted work on the Aquia Line after a long break. I am scheduled to host op sessions for the ACWRRHS and an open house in October for MARPM. So I need to get the track finished and operational before then.  Hopefully I can get some scenery and the bridge built by then too.

I have been spiking track over the past 4 days. I have just one turnout and the turntable to go before all the track is laid. I don't spike every tie as I am initially laying the track in case I need to adjust things. Once the track is operating satisfactorily, then I go back and drive 4 spikes in every tie.

On Saturday Jack Thompson stopped by to do exactly that. He spiked about 3 feet of track by the balloon camp. He also dropped off some figures he painted for me.  Jack is an excellent figure painter. He is also a model railroader and a dedicated re-enactor. I met him through my association with the National Capitol Model Soldier Society. I was a member many years ago and recently restarted attending the meetings.

He was the one that suggested another file of men in the squad by Brooke. ACW units usually marched in files of 4. I have my other units on the layout in 4 files, but I didn't have enough figures painted to do that here.  Thanks to Jack for volunteering to paint the figures to bring them back into regulation. Plus he did a great job.

I was a little rusty in installing the turnouts. Plus I restarted with a double slip. But I got it working OK with just a few foul words. Hopefully the last turnout will go smoothly.

I plan to reuse the turntable from the previous Falmouth, so hopefully that will also go smoothly.  Fingers crossed. 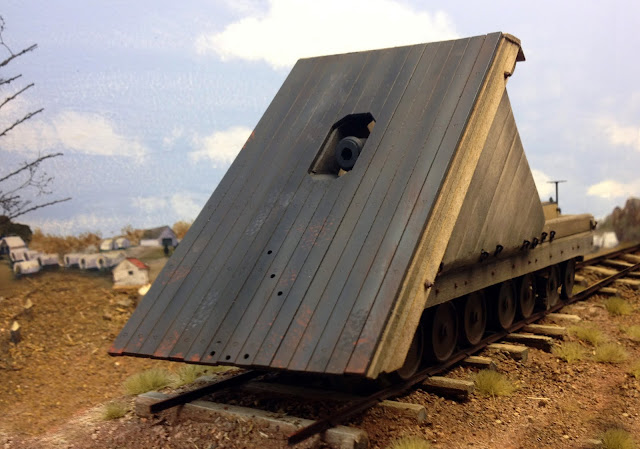 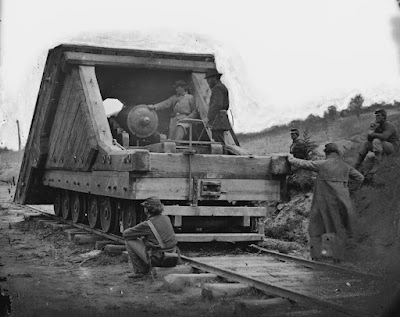 In November and December 2012 I built a model of the Lee-Brooke Gun. Since the time I wrote about my build, I have received several requests for more information about this gun.  I decided to consolidate my notes into one blog post to make reference easier.

This was the first ever railroad artillery piece. It had several names including the Land Merrimack or Dry Land Merrimack. Now I call it the Lee-Brooke gun based on Dr David Schneider's research. I have written about my model of this gun in several blog posts.

Rail Gun Update
Rail Gun - Finished
Below are the plans that Edwin Alexander published in his book on Civil War railroads. The plans are pretty good, but you may need to adjust some of the details of the front glacis based on inspection of the actual photos of the gun.  He did get the scale wrong. The wheels are about 28 inches in diameter, not the 33 inches he used in his drawing.  But the overall proportions are correct. So just scale it so that the wheels are 28 inches. 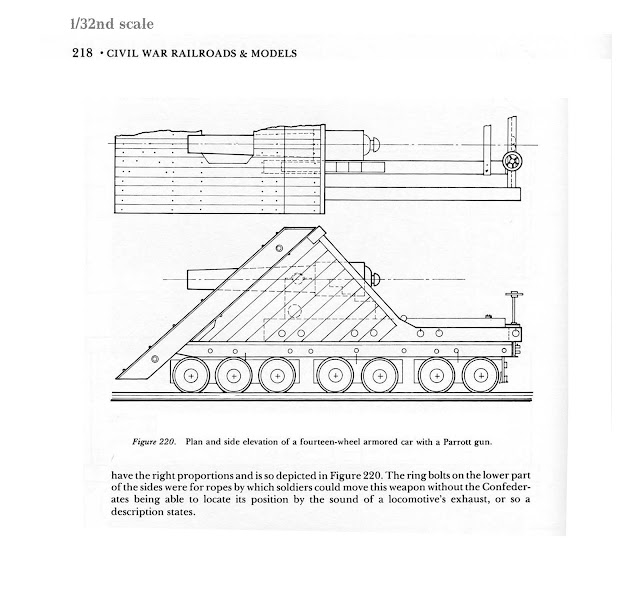 Also, his caption states the the gun is a Parrott. That is not correct. It is a 32 pound Brooke Banded Rifle. That was a fairly rare cannon but a few survived. There is one at the Washington Navy Yard. It was captured at Fort DeRussey in Louisiana. See http://www.fortderussy.org/artillery.html for more info. If  you look at the photo at the bottom of this post you can see that the muzzle of the gun has a swell and moldings.
I did visit the US Navy Yard in Washington, DC to measure a surviving copy of the rail gun. I used those notes to build my model. Alas, the notes with my measurements were lost or thrown out since I recall they got oil stains and grease on them when I was making the model.  I decided to measure the model and reverse the measurements so that others can use them in constructing their models. See below. Note that the cascabel of the gun at the Navy Yard is slightly different than the gun used in the railroad gun. 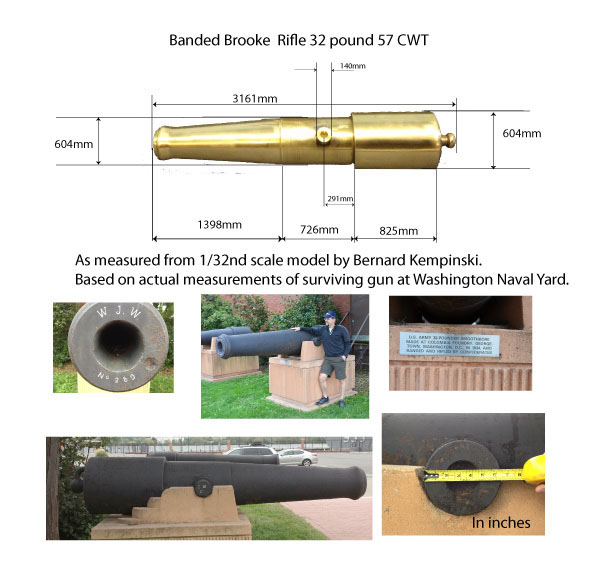 The carriage of the gun is also a unique design that I could not find used anywhere else. This is my interpretation of it. 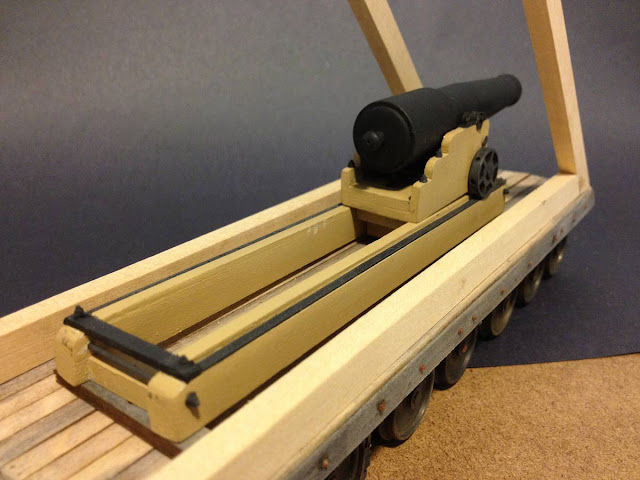 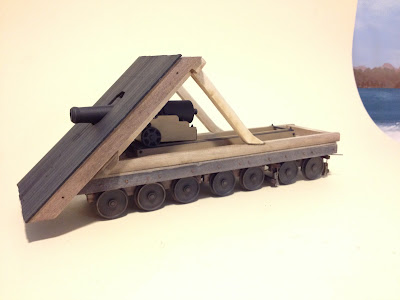 Here is a view without the side armor

I also suggest you get a copy of Dr David H Schneider's article in Civil War Times, Feb 2011 for a more thorough description of the railroad gun's provenance.
3 comments: