All Quiet on the Eastern Front 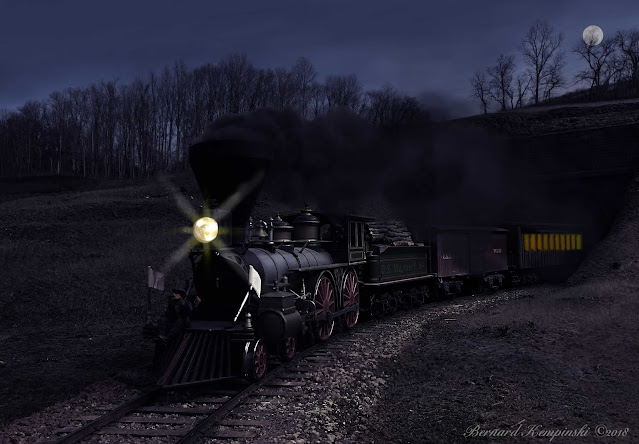 There has been a lot going on here with regard to modeling and my hobbies, but not much to report on the Aquia Line.  I received some excellent 3D stl files from Gerry Dykstra to print some ACW era battery wagons and forges. I haven't had a chance to print them yet.

Right about when I hurt my back, I had a set of florescent lights in the front train room burn out. I ordered new LEDs to replace them, but haven't had a chance to install them.  Other than that, I haven't worked on the Aquia Line.

I have been catching up on some writing projects that are or were due. Hopefully you will be seeing the Aquia Line in the MR press within a year or so. I am also working on a new book project. It is a track plan book, but I can't say much more about it at this point.

Speaking of track plans, the Hostlers in Odgen, Utah liked my basic track plan, but had some modifications to it that they desired. So I made an updated copy for them. I am waiting to hear back before I do their final track plan.

One of my major distractions has been wargaming. It is interesting that several of my wargaming friends also are model railroaders. There is a lot of overlap in the hobbies. So I have been learning new game systems including a new WW2 skirmish level game. I  helped Mike Kelly with some of his 3D printing.  He hosts local game meets at his house. I am also working with Bruce Weigle to produce forts for his upcoming wargame on the planned but cancelled Nazi invasion of Malta. Malta is covered with stone forts. Bruce is world famous for his intricate, bespoke terrain boards.  I will be laser cutting the forts to use on his new terrain board.

Alkem Scale models is also keeping me busy. I have a new batch of DODX cars for sale. In addition I have 4 models for clients in various stages of production. One of those is a model for Alexandria's new Museum of Freedom. This will depict the 1840's appearance of the slave jail that was on Duke Street. More on that project later.My back is getting better, but I am still not 100%. I have been doing a lot more exercise recently, including riding a new bike. I call my new bike "the tank" because compared to my old carbon fiber road bike, the new bike is "indestructible." I am riding for fitness, so I am more concerned with durability and safety versus speed. The bike has an upright riding position and chunky 700 by 45 tires. I am lucky in that we have lots of trails near my house including some that parallel the old RF&P so I can railfan while I ride.

Finally, we installed a new bird feeder in our back yard. We have been enjoying it immensely. I never knew how many different species of birds frequent our yard. 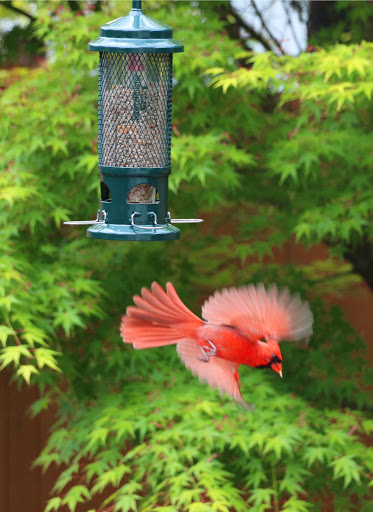 Can You Say Wind Chill?

I am back from a weekend trip to Pennsylvania to attend the Columbia Railroad Day. My itinerary took me to Gettysburg, PA on Friday and to Columbia, PA on Saturday.

The weather was warm and sunny when I left Virginia. When I arrived in Gettysburg, the skys were clear, but the wind was steady with gusts up to 60 mph and the temperature in  the 50s. My plan was to ride my bike around the part of the battlefield that saw action on the second day of the battle.  So I parked on  the saddle between the Round Tops. From there I rode my bike to the top of Little Round Top, then down the hill and west to the Peach Orchid and back. I was clever enough to plan my route so that my return climb to Little Round Top had a tail wind, but the otherwise the wind was brutal. Unfortunately, I did not pack clothes that were warm enough, so I was thoroughly chilled, despite the climb. I then jumped in my car and decided to tour the rest of the battlefield by auto.

I wanted to stop at the Gettysburg Train station, but those plans were literally  short circuited.  I was driving north on Stratton Street near the railroad tracks, when I heard a strange humming noise. I thought something was wrong with my car. I looked up and noticed that there was a large orange-blue flame above my car. I drove forward another 100 yards and I saw it again in my rear view mirror. So I stopped and got out and it happened a third time. A pedestrian said to me that a tree was swaying into a power line. Apparently the last time the tree swayed  it caused the power line to snap, or a breaker to trigger, so the flames stopped. I did not get closer to investigate. Instead, I decided to head to the north side of the battlefield to check out the scenes of the first day of combat.
The wind was actually getting stronger as I toured the northern sectors and clouds were gathering. I managed to complete most of the auto tour and decided to call it a day. I heard later that the wind caused a tree to fall on a car and a porta-potty at the battlefield. A man was trapped in the potty had to be rescued by the local fire department.
I arrived in Columbia, PA and met some of the hosts for the model railroad weekend.
The next morning, the weather was again sunny, but with temperatures in the 40s and wind gusting to 30-50MPH. The meet was held at the Columbia Pavilion, which is an outdoor covered deck.  The cold weather resulted in light attendance at the meet. Nonetheless, Thom Radice from the ACWRRHS was there as well as several of my friends from Facebook that lived in the local area. It was fun to meet with them.
Despite the small crowd, there were several vendors and exhibitors present as well as a reenactment unit.
A female re-eanctor was making samples of 1860 cuisine including some hard tack she had prepared in advance. I got to taste some and it was pretty good and not that difficult to chew. She said the cracker would get harder after a few days of drying out. So I brought some home to test out. She also made some tasty corn meal mushies and some kind of stew that I did not get to sample.
The 45th PA Infantry reenactment unit was on hand with an encampment and display of civil war era weapons. Some of the weapons were originals. They even let spectators handle them.  I got to handle an original Sharpe's rifle and a smoothbore musket.
Scott Mingus lead off the presentations with an interesting discussion of the Gettysburg RR.  I also purchased his latest book on the Cumberland Valley RR in the civil war.
Then Joel Moore showed photos of his highly detailed HO layout and described how he used his railroad as a setting for some novels he wrote.
I presented two talks. The first was an Introduction to Civil War Railroads, a talk I have done many times before. Alas, I was so cold during the talk that I was shivering as I spoke.  That made for an unpleasant experience for me and many of the folks watching expressed concern afterwards. I should have worn my civil war uniform as it would have been perfect for the weather instead the light cotton clothes I had with me.
Luckily, the weather warmed up a bit and the wind died down for my second talk on my Aquia Line Model Railroad. That talk went off quite well.
The last talk was by Chris Vera on how the people of Columbia were involved in the underground railroad.
In between the talks, my host Barry Schmit, took me to see the Columbia Model Railroad Club layouts.  They have large HO and O scale layouts in a former church which is now the Columbia Historical Society building.
I returned home safely Saturday night. It was a fun weekend, despite the cold and windy weather. 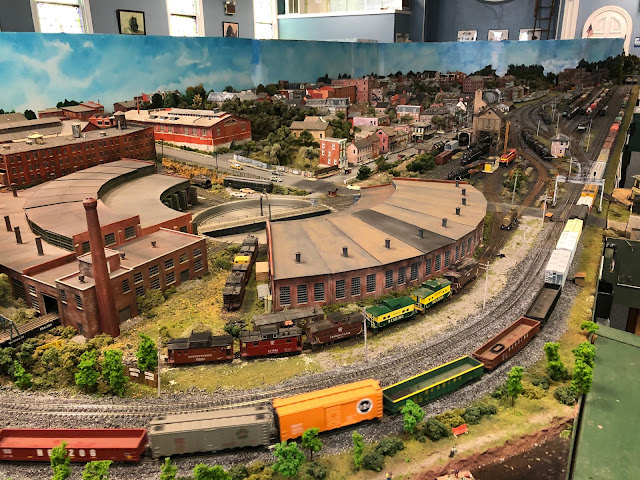