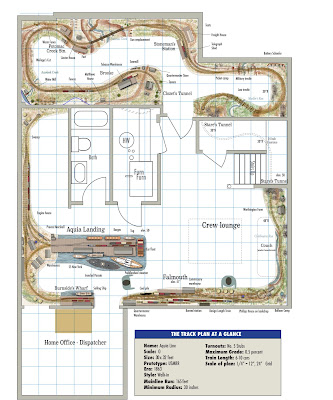 In preparation for rebuilding and expanding the layout, I sent out the survey crew to see if the latest plan could fit.  I case you forget, the plan under consideration is at the right.

The primary objectives of this plan are to increase the radius of the turn back curve at the entrance to the current Falmouth and to extend the layout into the crew lounge.  We also want to keep the Crew Lounge as open as possible without having to relocate the couch and TV.

Most of the other layout expansions I have considered make a 90 degree turn at Battery Schaefer and head directly under the stairs and into the crew lounge for simplicity's sake.  The area where Falmouth is now would not have any track.

It always bugged me that I was giving up that extra 10 feet of visible mainline run.  With only 120 feet in total of mainline, that is a big hit. So, the idea of this plan is to maximize the main line utilizing the wall where Falmouth is now. I would add a 180 degree 30-inch radius turn back curve at Battery Schaefer. The track would run across about 5 feet of tangent, and then enter Stares Tunnel by the room entrance via another 30-inch turn back curve. The half of the turn back curve in the closet would occupy a shelf before it went under the stairs and entered the crew lounge. (In the same general area where the staging yard to PoLA was, but with a much larger radius curve.) Crews could follow their train as it enters Stares Tunnel, pass through the door and then into the crew lounge.  The hidden run is a bit longer in this plan, but accessible over most of it.

Will it work? Using a set of 30-inch curve templates I laid out the possible new alignment in the visible and hidden part of the layout. It all fits.  To make the turn back curve centered in the available  space, I would need to push the track about 2 inches to the top of the drawing and into space where Battery Schaefer is now. This means will have to re-lay the southern turnout at Stonemans.  That isn't too bad, as the siding at Stonemans would need to be lengthened to allow 10-12 car trains anyway.  And I want to increase the radii of the turns at that end of Stonemans too.

I would have to move the trestle at Clairborne Creek, or it could be replaced by a larger trestle across the aisle from where it is now, or both. More bridges are better.

There would be a 24-inch choke point in the aisle at the apex of the curve. Hopefully that won't be too much of an issue as the new section is just a through track and not a place where people need to work.

Once the layout enters the crew lounge, this plan has more open-country running on a narrow shelf. It omits the large trestle.  The trestle would require so much vertical depth that there would be no headroom under the benchwork for people on the couch. I would like to keep the couch where it is now.

The next step is to prefabricate the benchwork and roadbed for the track that would go in the closet and under the stairs. These would be installed in sections with precise Festool dominos for alignment. I plan to use Atlas O scale flex track on 3/4inch plywood for these sections. On top of the plywood I will add 1/8th-inch plywood with the track centerlines for curves and easements that will be laser engraved. By doing this,  I hope to to ensure that this track work is free of kinks and sharp easements. Once that is tested and is "bulletproof, I will install in place and begin the rest of the construction. 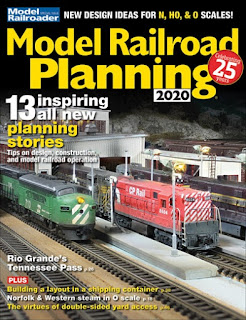 I noticed the the 2020 issue of Model Railroad Planning is out. Inside is an article about my former PoLA layout. I wrote and submitted the article several years ago, before I took down PoLA and sold it to my friend. Is this the last look at PoLa? Maybe, maybe not. I suspect it will pop up a few more times before if gets to really say farewell.

The rest of the issue looks good. MRP has consistently been my favorite model railroad magazine (journal?) As one of my friends, who agrees with me says," too bad it can't come out 12 times a year." 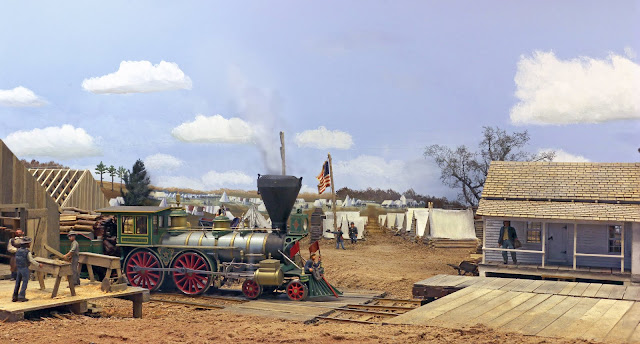 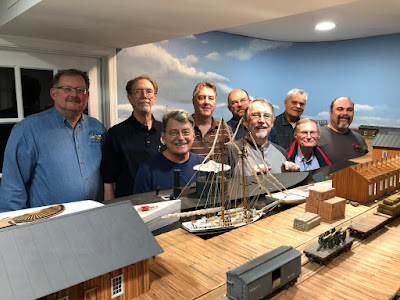 Members of the Rockville Model Railroad Society stopped by to see the USMRR Aquia Line today. They included  Tom Matty, Greg Cassidy, Deane Mellander, Jim Novaco, Roger Andes, Ben Sullivan, Kelly Regan, Fritz Fahlin and Joe Ney. I had not run the layout in quite some time, so I was pleased to see that it operated without problems during their visit.  It was a fun time. Ben Sullivan mentioned that he has a blog on the layout he is building. His layout is based on the Georgetown Branch of the B&O.  The Georgetown waterfront scene has always been a favorite of mine.   After seeing my layout, the group headed to Paul Dolkos's house to see his layout.

The visitors seemed as interested in the wargame board I am building as they were in the layout. A few of them said that they too did wargames.   This game board is going to be used in the Northern Virginia Gamers Group (NOVAG) Game Day in Chantilly, VA on 26 January. John Drye and Mark Franke are helping me host the game. 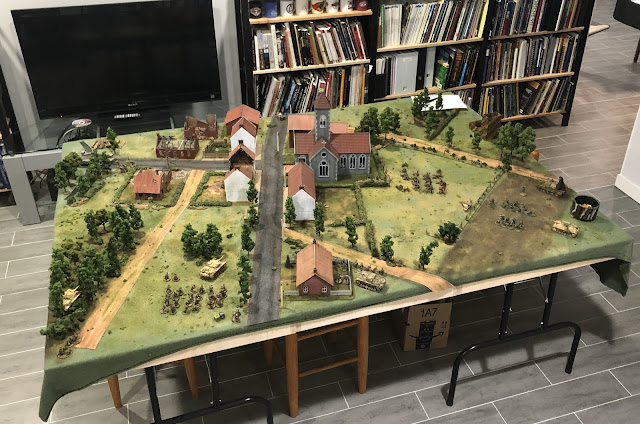 I am presenting a talk on Civil War Railroading on 16 January at 1000AM at the Model Railroad Club at the Hollin Hall Senior Center.   Please stop by if you get a chance to see the talk and check out their layout.
1 comment:

The years keep ticking along 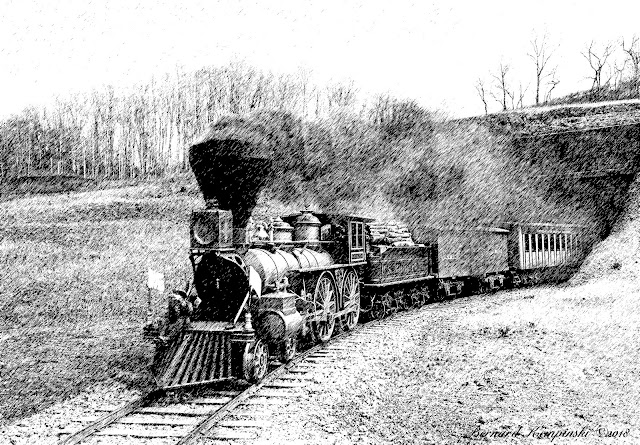 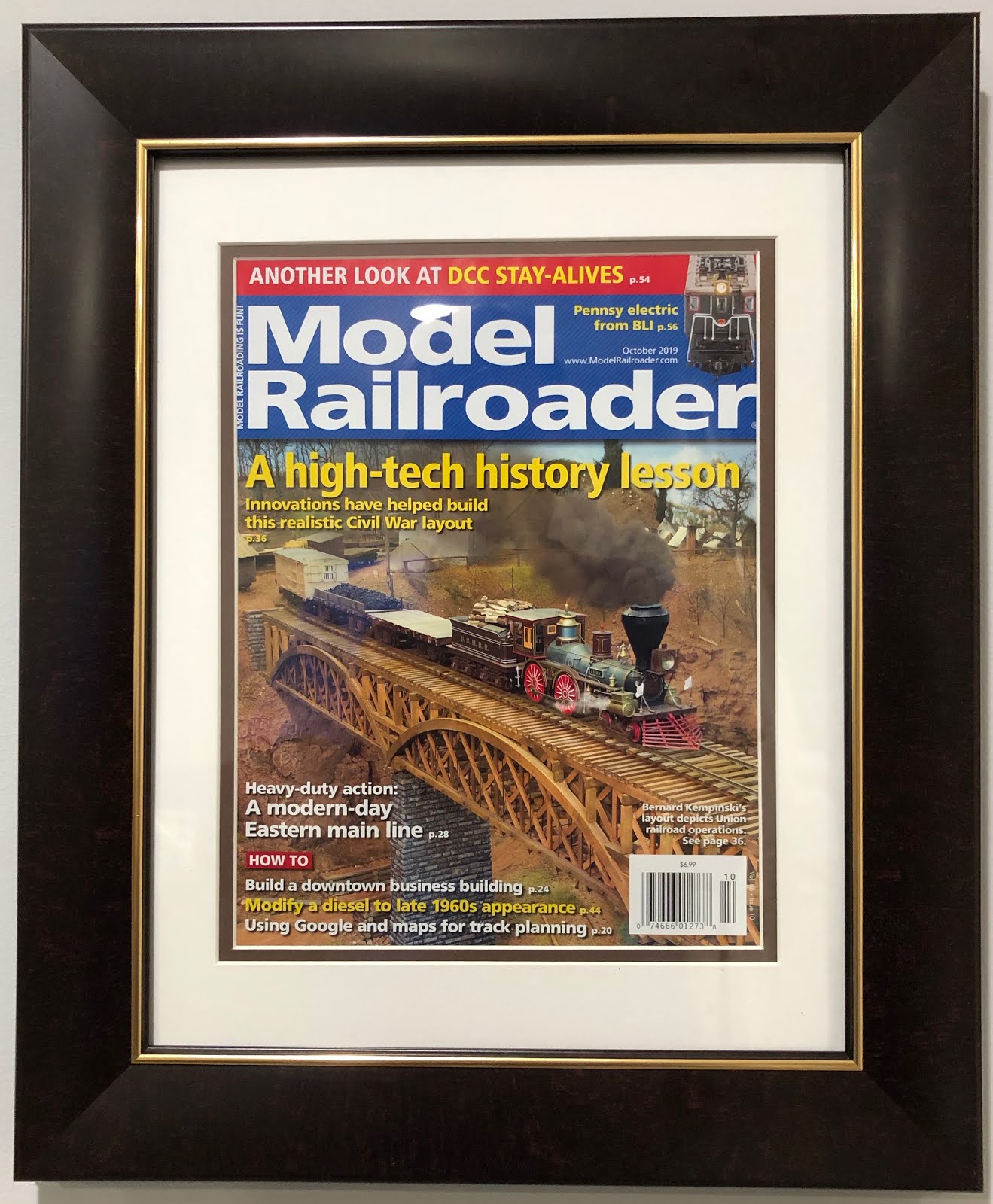 The 11th year of the Aquia Line had its ups and downs.  The highlights were the winning the best in show at the NMRA MER meet and getting the Aquia line on the cover of Model Railroader magazine. It also marked my restart of writing articles for the model railroad press. I now have a few in the publishing pipeline.

The lows were the floods. The first caused a lot of damage in the basement. Fortunately, the Aquia layout survived with very little damage, though I removed PoLA and sold it to my friend Tom. He promptly moved to Austin, Texas and took PoLA with him!

The second flood didn't hurt the layout, but required extensive repairs in  the upstairs part of the house. The upheaval from that work forced me to cancel the op sessions for the North East Interchange, even though that event was the hinge point of all my long term planning for the layout. Then my mom got sick, which postponed nearly all hobby activities.

It turns out that I did very little work on the Aquia Line last year. I did travel a lot and saw lots of layouts. In fact, I did more work and attended more op sessions on other people's layouts than my own.

There is still work to do on the Aquia Line. I will try to get more done this upcoming year, but it will be tough as my mom needs more care and I will probably get a hip replacement as my arthritis is getting bad. What little hobby time I have had has been siphoned off to my renewed interesting in wargaming, which I enjoy and my wife seems to support too. So it hasn't been all bad.

This year started off with an unusual project. For his Christmas present, my younger brother requested that I build a display shelf for his 3-rail O scale train set. He and his fiancé set up a train layout under their Christmas tree. He provides the trains, a Lionel GG-1 with seven passenger cars. She provides the scenery, a large collection of ceramic buildings with lighting, etc.
He wanted a shelf where he could display his trains during the rest of the year when they are not under the tree. He wanted some scenery on the shelf too.

Since I didn't have a chance to build it before Christmas, it became the first project of the new year.  The shelf is composed of two poplar 1x6 boards, each 5 feet long. I squared up the boards and used Festool Dominos to align the two pieces.

Then I made roadbed sections using 1/8th inch MDF.  I cut the roadbed strips with a 45 degree taper using my track saw. I glued and brad nailed the road bed pieces to the poplar boards. Then I used my Festool Rotex sander to reduce the angle of repose of the shoulder of the roadbed and to carve out some ditches in the poplar board.

It was a simple matter to spike down some Atlas O scale track, paint and scenic it. I used some sand I purchased at Michaels craft store as ballast. It had a sparkle, so I needed to spray the track with a light coat of gray to kill the gloss. I didn't have enough tan ballast, so I used some N Scale cinders to line the edge of the road bed.  Some ground foam and static grass completed the scenery.

I didn't build the shelf brackets. It is up to him to figure out how he plans to mount it is his home. 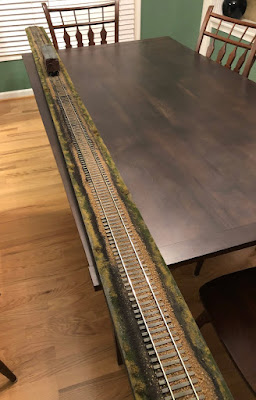