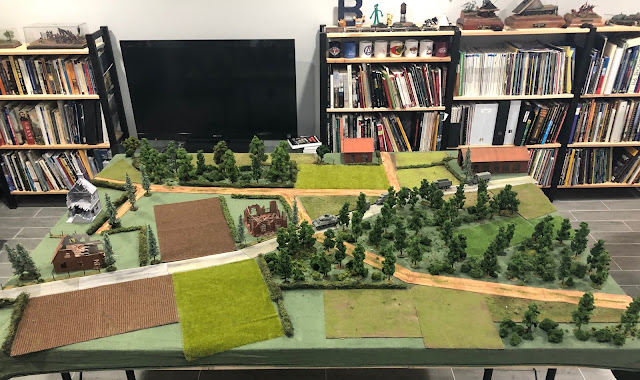 In August,  my niece, who acted as an interior decorator to help us with the basement renovations, coined the term, "war room" when discussing the front room of my layout that houses the Aquia Line from Brooke to Falmouth. I thought the name was cool. However, I decided that moniker applied better to the crew lounge when it is set up for war gaming.

This afternoon I set-up the first miniature war game in the new War Room.   The table is 5 by 7 feet overall. Ironically, the game table started as two 5 by 2.5 feet model railroad tables that I built for John Drye. He decided that he didn't have time to finish the project he intended for those tables. So, he traded those tables back to me for the benchwork of a  small layout I had built nearly 25 years ago.

I added a set of folding legs to the blank tables. These are lower in height than normal for a model railroad, but just fine for gaming.

Next, I made an additional 5 by 2 feet section that fits between the two 5 by 2.5 feet tables creating a 5x7 overall size. That section clamps to the other two tables. The whole arrangement is reasonably sturdy. It can be disassembled and stored when not in use.

The crew lounge is large enough to house the 5x7 table with plenty of room for the planned expansion of the Aquia Line.  Even Alicia likes it. She came down and helped me build the terrain board. It is very rare for her to come down to the basement. I think she is lobbying to keep the crew lounge /war room open.

War gaming scenery is a bit different than model railroad scenery. It has to be robust and reconfigurable. So it tends to be less detailed, and more stylized. But a lot of the same principles apply.

The figure below describes the scenario we will play. This is part of our commemoration of the 75th Anniversary of the liberation of Western Europe. Each month we have been playing a scenario that is appropriate for that month in 1944.
We have already done scenarios from D-Day, Fighting in the Bocage, and the Battle of Arracourt. This is from operation Market Garden, the Bridge too far campaign.

MARPM2019 was a remarkable success. Thanks to all that participated and helped make it a great event. We plan to continue this meet next year, so please mark your calendars.

Here are some photos from the meet and open houses.

Email ThisBlogThis!Share to TwitterShare to FacebookShare to Pinterest
Labels: MARPM 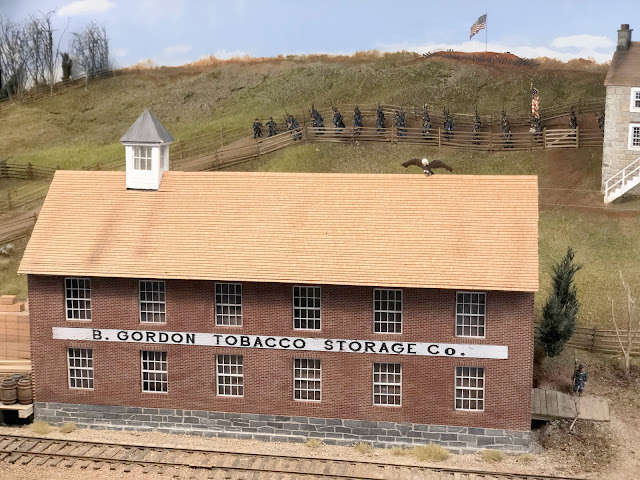 One of the benefits of the flood this summer was that I did a serious purge of excess hobby stuff that I have accumulated over the past 20 years.

In the process of purging and sorting stuff, I found two O scale bald eagle figures that I had purchased. One had with its wings spread and one with wings at rest.

The flag pole at Aquia Landing seemed like the perfect place for the resting eagle to perch.  The other eagle needed a more substantial base, so I placed him on the roof at the warehouse at Brooke. I thought about trying to suspend this eagle with wires but didn't think it looked good.

Bald Eagles were once plentiful in the Chesapeake Bay area. They were nearly killed off by DDT and other human interference. Fortunately, with conservation intervention, they are making a comeback in the bay area.

A few years ago a pair of bald eagles built a nest at the National Arboretum. The National Park Service established a live "eagle-cam" to monitor the birds.  My wife was very interested in watching them developed. Alas, some animal lovers were shocked to see the eagles bring squirrels and cats to the nest to feed their young.  They are apex predators.

Post script: A week after this post I was playing golf in Utah on the Wasatch Mountain State Park Mountain Course. I was able to score an eagle on the 9th hole, a relatively short, but all up-hill par 5.  That is only the second golf eagle of my meager golf career.