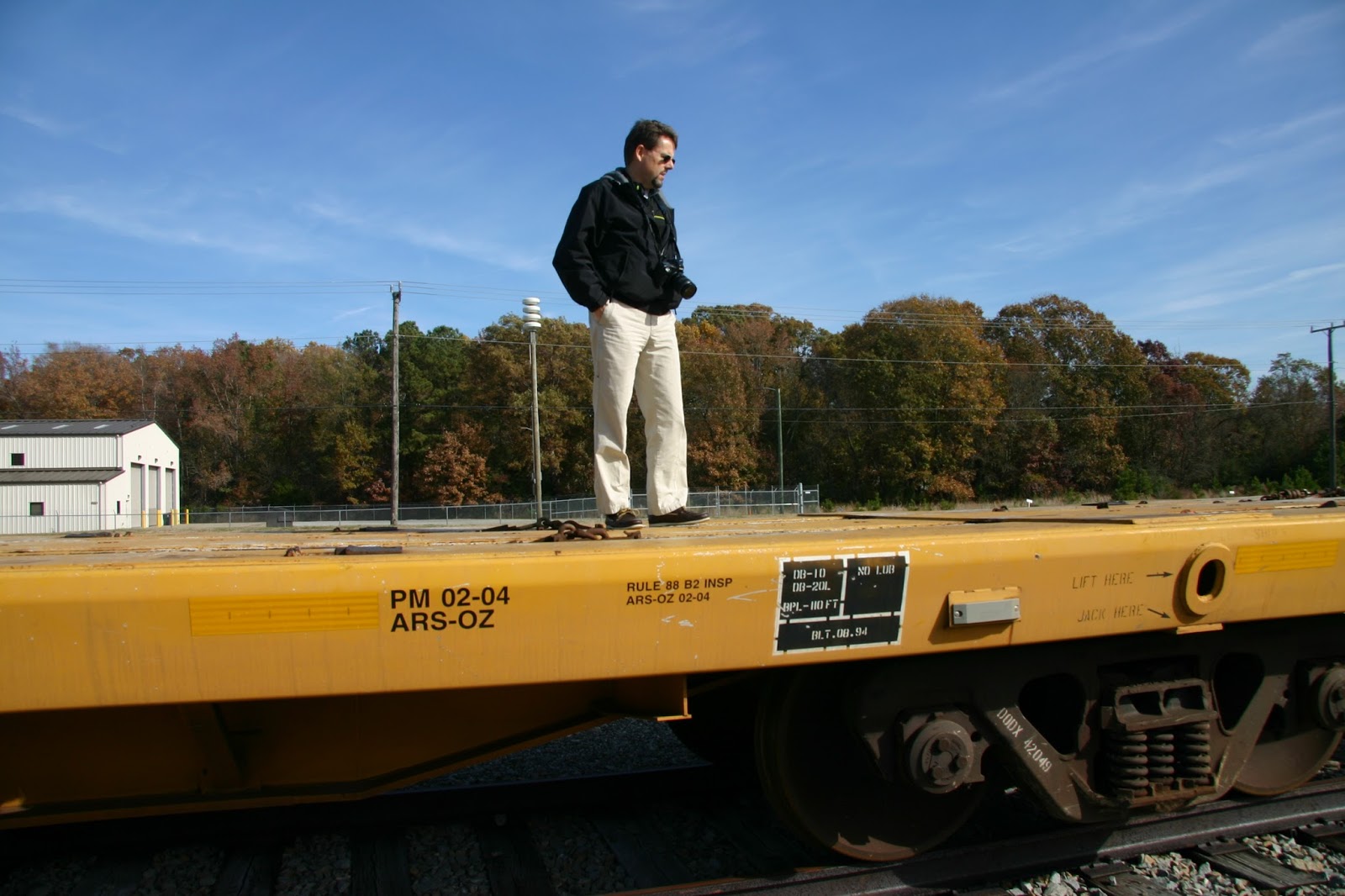 On Saturday I made a hastily planned trip to Fort Eustis. The main purpose of the trip was to photograph and measure a DODX 42000 series car in order to prepare a future kit for Alkem Scale Models.  I was alerted to the arrival of the 42000s at Fort Eustis by a friend (who prefers to remain unnamed) that works there. He offered to guide us on a trip.

I drove down from Alexandria, while Norm Wolf, who now lives in the Norfolk area, agreed to meet us there to help out. While we were there, our guide took us on a tour of most of the interesting railroad activities there. Ft Eustis is an attractive post set on the James River. It is now a joint base but it still houses most of the US Army Transportation school and museum. We did not visit the museum on this trip, but I blogged about it here before.

After a late lunch we visited the Chesapeake Bay and Western Model Railroad Club open  house. This is a long standing club with a massive multilevel, mushroom type layout. It spans two floors connected by a several helices. The mainline run is about 16 scale miles. It has a lot of nicely detailed scenes

Here are some of the shots I took on Ft Eustis.

Finally, some ACW era modeling. Here are some shots of the work-in-progress Presidential Passenger Car.  The model is 1/32nd scale. I posed it on McCook's Landing to have a nice background, even though the car is the wrong scale. The O scale boxcar next to it gives a sense of how big the Presidential Car is.

This car had a unique style of truck. The drawings we have are incomplete, so we had to imagineer some aspects of it. The model has working swing arm suspension and brakes. But I tied it all down since this will be a static model.

The model will be decorated in its funeral configuration with black bunting and one end having the railings removed to allow removal of the coffin. I also will build a coffin and Veteran Reserve on guard.
No comments:

Terry Heilman of Stafford Virginia contacted me requesting some information about a railroad key he dug from a house site on November 13, 2005 east of Dumfries, VA. He sent me this picture of the key.  Neither he nor I have been able to find out much about this key. If anyone knows more about this key or keys of this type, please post in the comments here, and or contact him directly at  703-441-1794. (He requested I list his telephone number). Thanks. 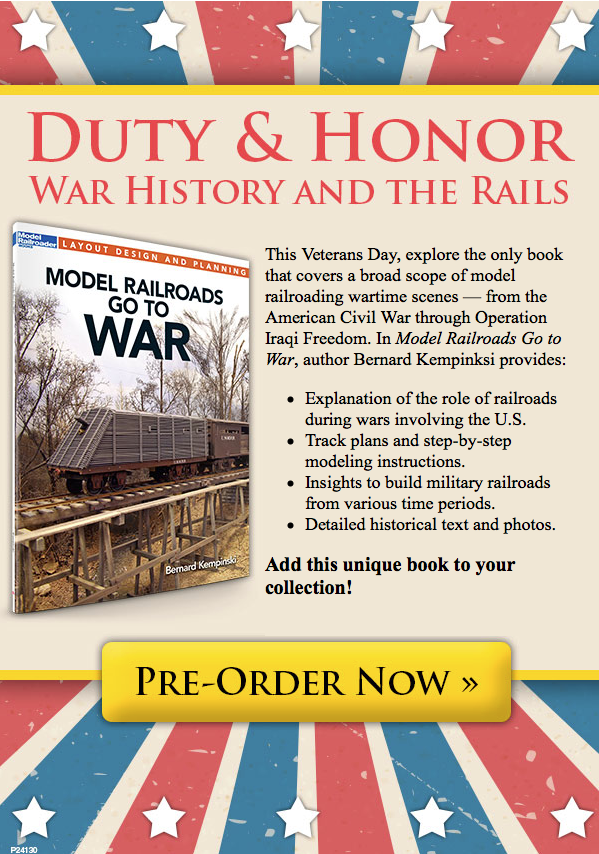 I worked on some more military flat cars this afternoon. I used a some chains from a set of Alkem Scale Models Military Tie Down Chains to secure a HEMMT Fuel truck to a OTTX 60-ft flat car. The flat car is an Intermountain Company model. The HEMMT is Herpa model. 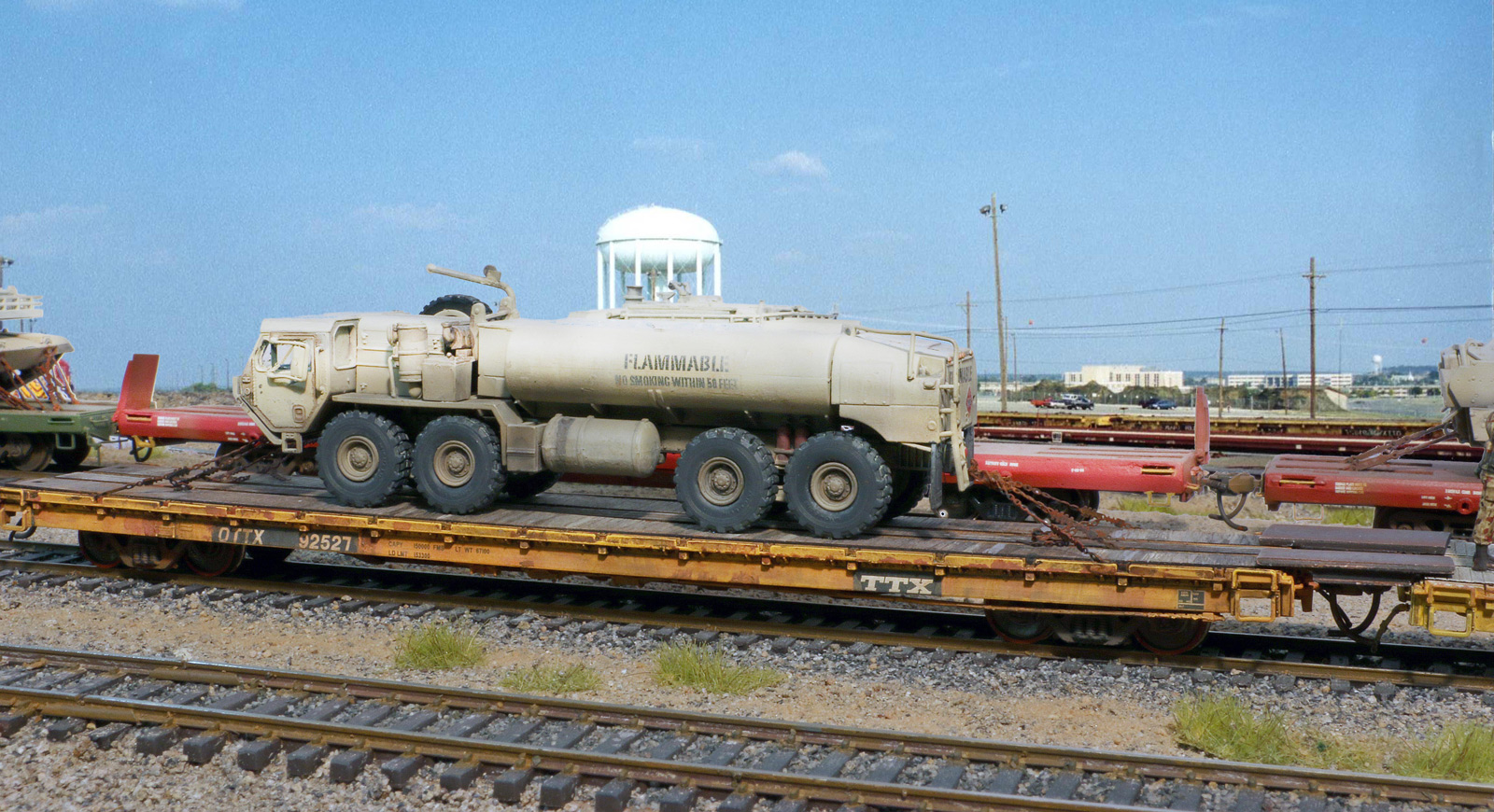 The back view shows how the chains are secured to a ring and then added to the tow pintle. The ring is included in the  Alkem Scale Models Military Tie Down Chains set.


I also built another DODX 41000 flat car using some of the left over pilot model etchings, no sense wasting them.  I tried weathering this car to match a photo of the same car from RRPicture.net

I used the sea salt technique to simulate the peeling paint on the deck.  If you are unfamiliar with the sea salt technique there are dozens of youtube videos that describe it, such as this. In a nut shell you sprinkle salt on the  a moistened model where you wish to depict peeling paint or rust. Then you spray the final color on top of the salt. When the paint dries you wipe away the salt and you get a rough peeling effect. Some people use hairspray too as it washes off with water. Lots of techniques out there.

I added chains to the deck as they stay with the empty car. The paint is very faded on this car. 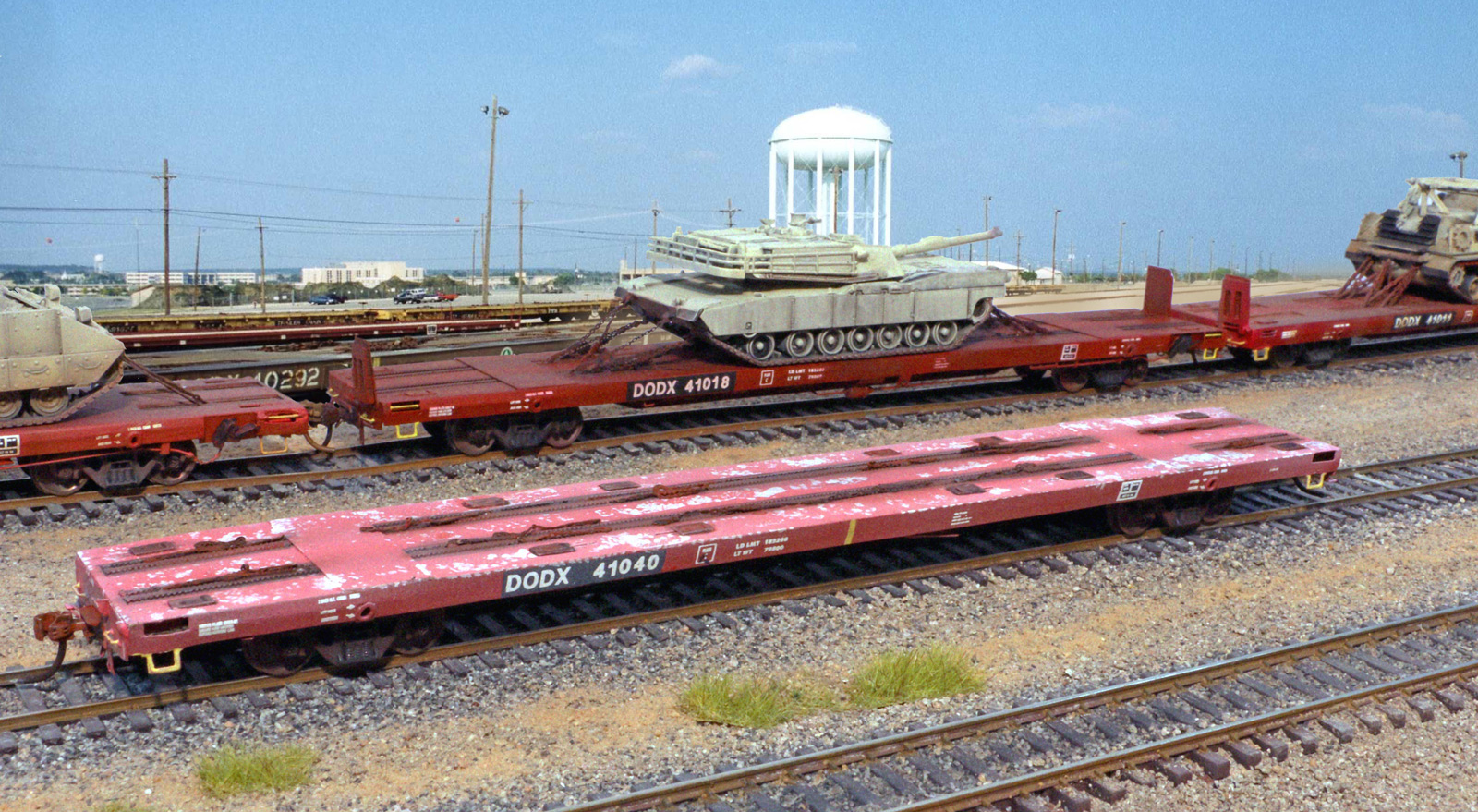 Some tips on applying Alkem Scale Models decals. We suggest you use Future Acrylic Floor polish as the gloss coat and the setting agent. When using Future, the decals are nearly "fool proof." First spray or brush paint a thin coat of Future to the area you wish to decal. Let that dry for 15-20 minutes.

Then cut the desired decal film close to the lettering, but you dont have to be too close. The less extra decal film the better, but don't make the decal too small to handle. The extra film will disappear later.
Then put a drop of Future where you wish the decal to go. Apply the decal with tweezers or a toothpick. Once it is set, blot with a lint free rag. The Future dries in about 10 minutes. After waiting an hour or so, apply dullcote to the finished model. There is no silvering and the decal edges disappear. It is almost magic!

Note on the DODX decals there is white lettering that gets applied over black decal backgrounds. Apply the black decal first as described above and let it dry for about 10 minutes before doing the next layer decal. 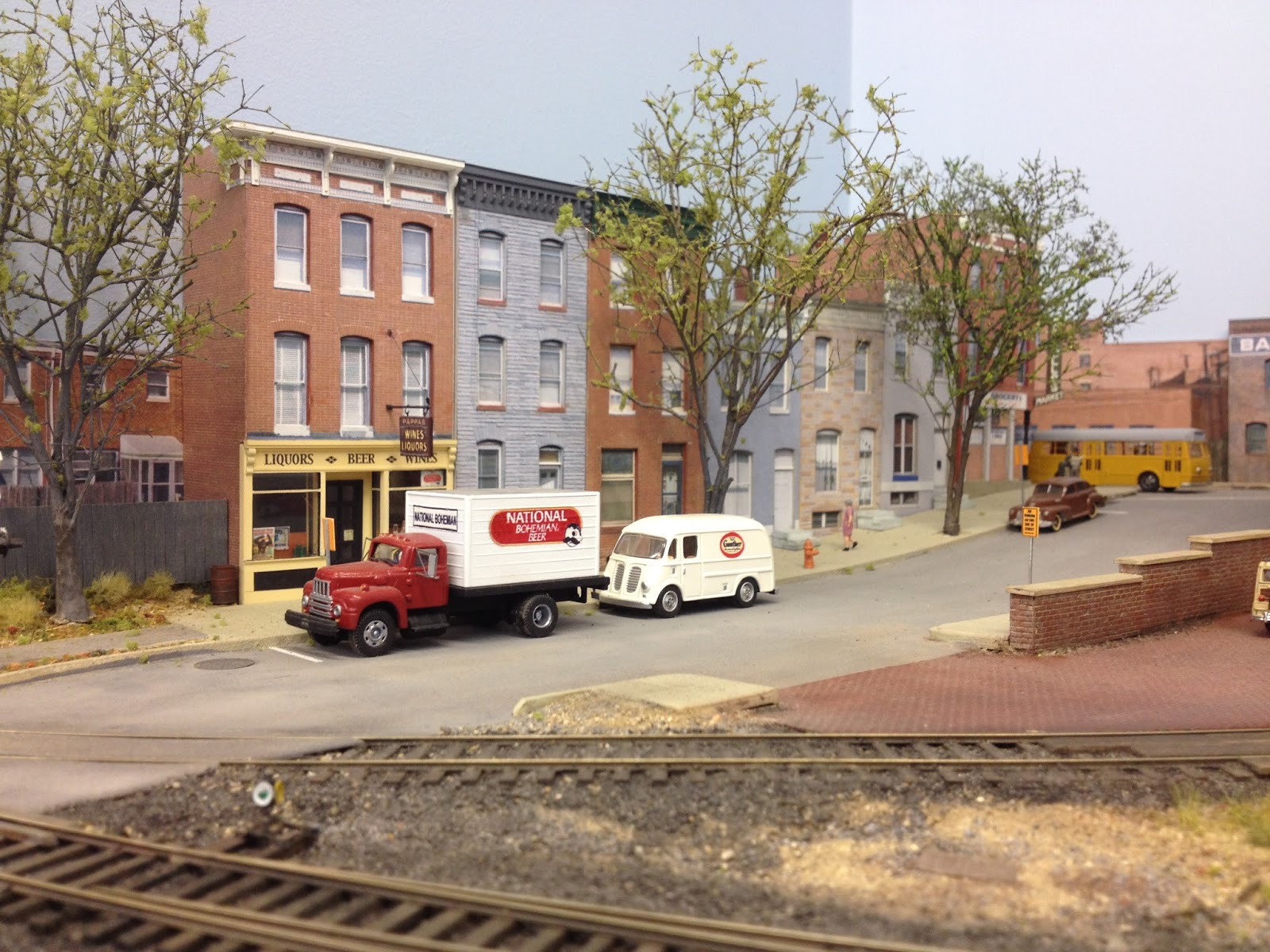 I took a few hours break last weekend to hook up with Paul Dolkos, Marty McGuirk and Fred Scheer at Paul's Baltimore Harbor layout and have a burger at Chadwicks in Old Town. Paul lives about 2 miles from me, so it is an easy trip. In spite of that I had not been there for awhile, so it was fun to check progress on the BHRR and hear about Paul's recent travels to Europe.

The three guys were conducting business exchanging some new back-lit CVP radio throttles (Note - these are not Kansas City Approved).

While they were conducting business, I checked out the layout. Paul's work is top quality and it is always a treat to see it.

My wife asked me to take some snap shots to show her what Paul has been up to. One of my favorite model railroad stories is when I took her to see Paul's B&M layout for the first time. As she walked down the stairs she said, "Ohhhh, so this is what they are supposed to look like!"  Bazinga!

Paul's new layout is built to the same level of craftsmanship, though the subject is not as scenic and charming as his old New England based B&M. This one depicts the gritty side of the Baltimore waterfront.

Marty blogged about his take on the same visit here.