I recently returned from a 13-day road trip to Birmingham Alabama to visit my daughter and her husband and then to Lexington, KY to see my son and his wife. Ostensibly the trip was to help my kids with house renovation projects and we did get a bunch of that done. But I also had some time to do a bit of sightseeing in Birmingham, visit a civil war battlefield, and participate in a High Performance Driver Education Event (HPDE) at the National Corvette Museum Motorsports Track in Bowling Green, KY. 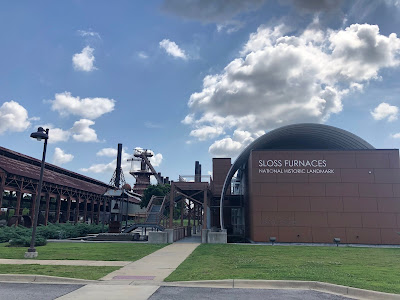 My daughter allowed me one day to goof off in Birmingham. I elected to visit the Sloss Furnaces National Historic Landmark in the morning and the Barber Motorsports Park in the afternoon.  Sloss is next to a busy main line and three freights came by while I was there.
I have been to the Sloss Works on two other occasions, so this was a refresher trip. They have built a nice visitor center at the south end of the facility. I am amazed and pleased  that this steel mill has been preserved for public visits. I asked one of the docents about how they deal with rust, as some of the artifacts are clearly going to become hazardous as they continue to decay. He said they have a plan for that. They inspect it every year and do remedial work as required, but there is a lot of rusting metal there and it all can't be preserved. Enjoy it while you can. 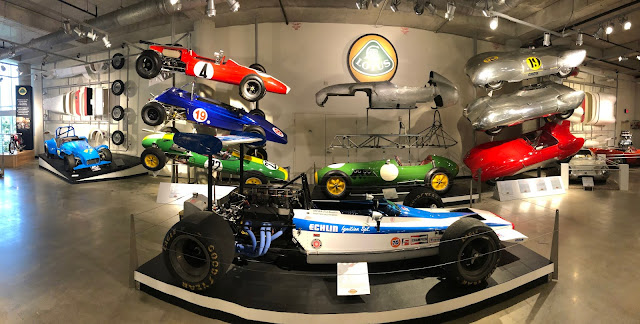 The Barber Motorsports Park is the nicest, most elegant race track I have ever visited. You get the feeling you are entering a luxury resort as you drive up to the museum and track. The museum is probably as big as the National Air and Space Museum in Washington, DC.
However, if you are a race car enthusiast and not into motorcycles like me, the museum was a bit of a let down. They do have the world's largest private collection of Lotus race cars and that was cool. But that was about all the cars they had. There were some cool Porsche cars on display in  the basement level, but that was not open to the public.
If you like motorcycles, you will love this museum. There are over 1,000 motorcycles on display in all kinds of styles with an emphasis on racing and street bikes. I did not see too many custom, display type bikes,  but there were antiques, commercial delivery, road racing, dirt racing, drag racing, ice racing, side cars... just about any kind of motorcycle you can imagine on display.
To add an extra treat to my visit, the Porsche Performance Driving School was in session while I was there. I was able to watch them do laps around the track.   This was a good lead in as my own performance driving event was going to happen later the next week.
I stopped at the Battle of Franklin, TN on my way from Bham to Lexington. The charming  town has grown and absorbed much of the battlefield, but there was a nice planation home and a portion of the east flank of the battlefield preserved for viewing. The Battles of Franklin and nearby  Nashville were some of the bloodiest of the war and resulted in utter destruction of the rebel armies under General Hood.
I also made a stop at the National Corvette Museum Motorsports Track in Bowling Green, KY to reconnoiter it. A few days later, my son Chase and I went back there for a day of high performance driving instruction. This was the first event like this I have tried and it was a hoot. During my first session I was as nervous as I could be. But by session 3 and 4 we were hustling around the track thanks to good instruction and our getting accustomed to the speed. It was fun and left me wanting to do more.  High speed driving is much harder than you think, both mentally and physically. We did about 90 miles total in 4 sessions. I was drained after each session. But I do want to do this again with a more nimble car. The Racing Tiguan did great, but it is not really designed for driving like this.  Maybe there is another Porsche in my future?

On my way home, I drove Corridor H, the new road that cuts across central WV. It is a quirk of geography but the fastest route from my house to Lexington KY is via Maryland:  I-270 to I-70 to I-68 to I-79 though WV.  The Route on I-81 to I-64 through C&O country is of similar length but has too much truck traffic to be an enjoyable ride. However, I elected to try Corridor H  from Weston, WV to Strassburg, VA. That is the most direct route, but as they say in WV, “it’s through the mountains.” The new road is not complete, but the parts they have finished  are smooth and traffic free. The road tends to follow the ridge tops versus the creeks. As a result there are some amazing bridges and spectacular views. It will be a boon to central WV when they finish that road. I just hope it is within my lifetime as it has been under construction for over 30 years.  Below is a view from a rest stop just west of Moorefield, WV. Looks like a model railroad backdrop.
I did see a railroad yard near the Mt Storm power plant from the road but it was empty. There were about 2 dozen freight cars in the Buckhannon yard, but I didn’t stop for pics.
I'm now back in Virginia. I did a Zoom presentation on railroads of the civl war for the John W. Barriger III National Railroad Library and the St. Louis Mercantile Library last weekend. Now, I am getting back to working the items on my do list including a new model for a museum and some writing projects. I also plan to start work on my layout expansion asap.

The Continuing Saga of the LED lights

In my effort to upgrade the lighting in my layout, I decided to replace the set of florescent 18-inch under cabinet lights that were above the curved track at Brooke with LEDs. My initial intent was to replace the florescent fixtures with equivalent LEDs. But while shopping at the local Lowes store I noticed a string of 16 feet of LED lights with adhesive backing. The box said they put out 4000 lumens.  The price seemed good, so I thought I would try them. Alas, when I checked out, the price mysteriously doubled with some kind of cryptic note printed on the receipt about "full retail price was charged for this item."  I went to return them, but the line was too long. So I took them home and decided to give them a try. 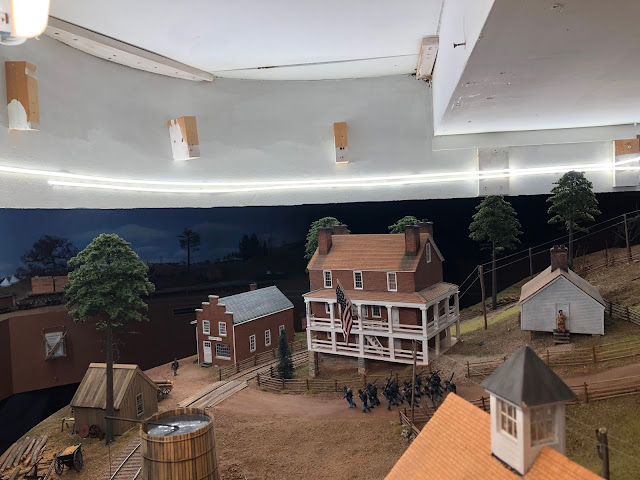 Removing the existing lights was both satisfying and difficult to do without damaging the existing scenery. But, I was able to do it with only a few swear words and lots of awkward bending and reaching.

My wife helped me install the LED strip. They were fairly easy to install. I just hope that the double sided adhesive tape they provide will stand the test of time.

When we plugged them in, we both were impressed by the bright, even light. Alicia said, "you need to put these on the other curved section of the fascia too." Maybe I will, but not right away. I want to see how these hold up.

On June 29th Bill Sornsin and his family stopped by to see the layout while on a a vacation to the east coast. Bill has a huge GN layout back at his house in Seattle.  Bill's family was not as enthusiastic about trains as he, but it was a hot day and they appreciated the air-conditioned basement after a morning of walking around the sweltering city. The city is built on a swamp, after all.  Bill's younger son, Nick, did learn how to run an engine, couple and uncouple cars. So he is now qualified to run on the USMRR. 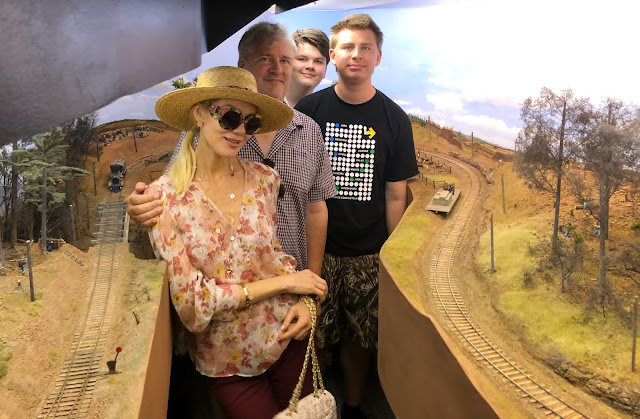