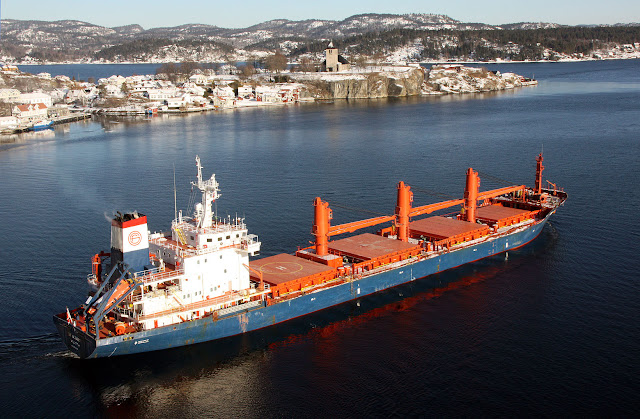 Over the past few nights I got the track to the PoLA expansion installed, wired and tested. Then I paved the ground surface using my Taskboard technique. It works really well and is the best way I have tried to pave large areas.

I used Patching Plaster to touch up gaps and screw holes. It needs at least 24 hours to cure.  One thing about using Taskboard, you can not sand it when it is wet or even damp. It needs to fully dry before sanding.

The weather has cooled slightly in Northern Virginia and the days are noticeably shorter. That means it's time for....model railroading. I will be travelling to several events in next month to present talks. If you are in the neighborhood, stop by and say hello. 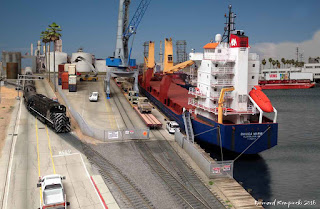 On October 1 I will be at the MARPM in Fredericksburg, VA presenting a talk entitled, "Down to the Sea in Trains." This will be an overview of how railroads and ships interact at marine terminals from the early days of railroading to the current era of unit trains, double stacks and massive container ships. The talk will complement my next book due out in 2017. 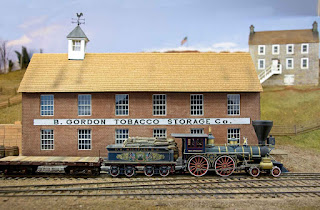 October 13th I will be presenting an update on my USMRR Aquia Line to the American Civil War Railroad Historical Society at the La Quinta Inn on Primacy Parkway in Memphis, TN. This is part of the ACWRRHS annual meeting. There is also a layout visit to Charlie Taylor's O scale civil war era layout and a bus trip to Shiloh planned. For more info see the ACWRRHS Yahoo Group. 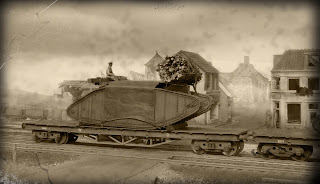 October 20-23rd I will be presenting three clinics and the keynote address at the 2016 NMRA MER convention in Raleigh, NC. For more info see Tracks to the Triangle website.
No comments:

Getting the Band Back Together

Last week I visited Utah for golfing with Alicia, rail fanning, layout work and operation sessions. The golf was great as the thinner air at 7,000 feet makes you feel like Rory McElroy. Alicia and I had a tournament over three rounds that was quite close. We split the first two matches, but I won the rubber match helped by making back-to-back birdies.

The op sessions were part of Great Basin Getaway 2016. This is the 27th year they have hosted the event (usually every other year). As usual the Utah folks put on a great event. I operated on 3 layouts and visited 5 others.

One of the layout visits was to Steve Blodget. This was my second visit to his 1890's era layout. It is a gorgeous layout that almost no one outside of Utah has heard about. It is  a freelanced railroad set in the 1890s in central Utah.

In the op sessions, I was lucky to draw the Milton Turn on Rob Spangler's layout. That was a fun job with lots of switching in two towns.

I also operated on Quintin Foster's N Scale DRGW layout and Ted York's HO scale Cajon Pass layout, and had a great time at each.

I stayed with Brian Brendel for the last part of the week. We did some rail fanning and work on his layout, primarily backdrop painting.  As usual Michelle cooked some awesome cakes and pies. John Drye and Jake Brendel also joined us, completing the reunion of the February Altoona Railfan Group.

Brian had previously installed the hardboard skyboards and gave them a base coat of bright sky blue paint. I was there to paint the clouds and terrain. In order to expedite the process, I gave Brian and his son Jake a quick lesson in backdrop painting and put them to work. Brian added the base terrain color coats, while Jake painted the far line of distant trees. I added the clouds and closer trees with more detail. I also added some rock out crops, and other details as appropriate. 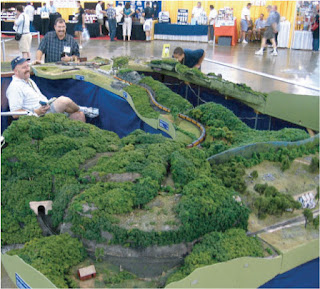 Overall, the detail on the backdrop will match the scenery techniques that Brian will use. His layout traverses some of the least populated and heavily forested areas of Virginia. He uses a tried and  tested technique that combines Woodland Scenics Foliage Clusters and Supertrees to simulate dense forests. Here is a sample shot from some previous work he has done.

We also discussed some revisions to the track plan that I will update. 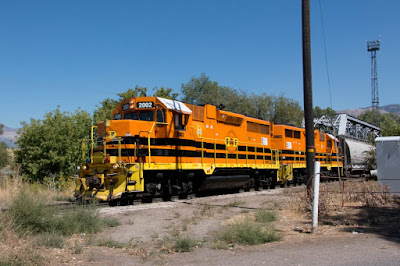 Here are some railfan photos we got during the week. 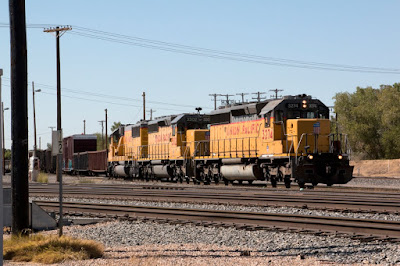 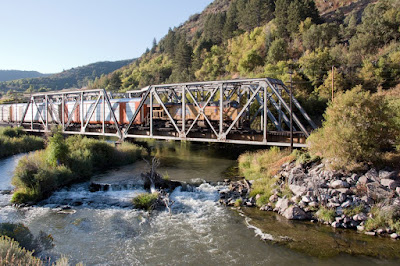 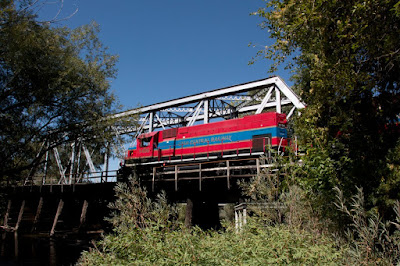 Brian lives a short distance from the UP Transcontinental main line, a great morning walk with the dogs.