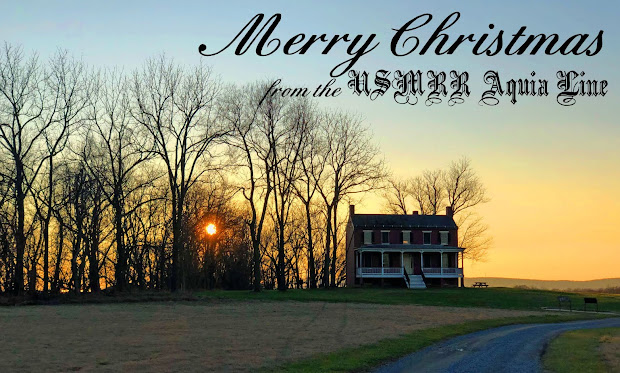 The past few months have been trying times for us. We managed to rebuild the damage after the flood and even had a chance to upgrade some parts the house. Then, after Thanksgiving, my mother got sick and spent 10 days in hospital and 6 days in rehab. She made a good recovery thanks to modern medicine and wonderful nurses and doctors.

Last weekend, we transported mom to Pennsylvania where she will spend Christmas with my brother.  On the way back home, we had just enough daylight to stop at the Monocacy battlefield. We had visited it about 15 years ago with Alicia's mom and dad on a genealogy trip with several members of the Worthington family.

The farm house in the lead photo is the Worthington House on the battlefield. Fighting swirled around the farm while a boy, one of Alicia's distant relatives, watched the battle from the basement. He later wrote the book, "The Battle that Saved Washington."

I would like to build a model of this farm for the expanded Aquia Line layout. Hopefully, I can begin work on that in 2020.

The NPS has built a new visitor's center on the north side of the battlefield. It has some nice displays, including one of the better animated battle maps I have seen.

Along with the family connection, the Battle of Monocacy holds a special place in my memory. The first miniature wargame I played was a scenario based on the Battle of Monocacy. It was at Larry Bond's house around 1988. It was this game the really ignited my interest in civil war history and gaming.