The dye is cast, It's not flowing to the Rubicon

I did a test of the southeast gutter today using florescent dye. I poured two cups of water tracing dye into the gutter, then ran the hose into the same pipe. In about 10 minutes, the dye reached the sump. I happen to have a black light in my house from doing some experiments with simulated night photography. So I used that light to illuminate the sump.  This verified without a doubt that our downspouts are draining to the sump. I think we now know enough about our situation to proceed with repairs and enhancements to better control floods. Despite all this, our area is flood prone, so nothing is guaranteed.
No comments:

1. Redesign the gutter downspouts to ensure they drain away from the house. Drain to the front is preferred, and away from neighbor’s lot line.

3. Install a second sump or enlarge current sump so that we have at least 2 @ 1/2HP sump pumps. One pump will exit in existing pipe to the back, one to exit to the front.  I am undecided on whether we need a new battery back up pump. It won't cost much to add and it would provide some redundancy if say the circuit breaker pops. The new sump pumps will be wi-fi enabled so we can monitor their performance and react if power goes out or a pump fails.

4. Run an electrical line for a new dedicated outlet for the new sump pumps. While I'm at it, install a new wall switch and outlet so I can power my layout with one switch.

5.  Install a natural gas powered 16-22KW whole house generator with automatic cut in during power outages and whole house surge protector.  That way I can run trains in a power outage.

6. Draft an annual service plan to check all systems and service as needed. 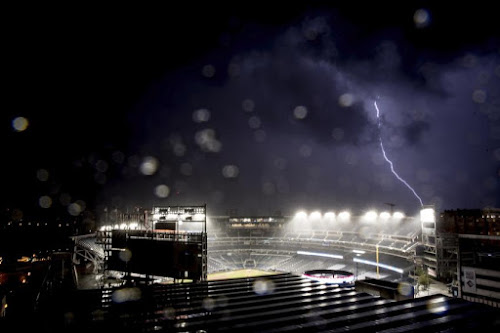 We had another massive storm last night. If you were watching opening day baseball game you saw some of it.
This time our power stayed on, but the sump pump could not keep up.  In a way we are lucky repairs from the storm of a few weeks ago were not yet done, as they would have been in vain.
We have had several drainage and erosion contractors here in the past few days. We have some ideas to improve drainage and increase pumping capacity. None of them involve removing the Aquia Line. But if these measures don't work, we may have to strip the basement and install a whole new drainage system. 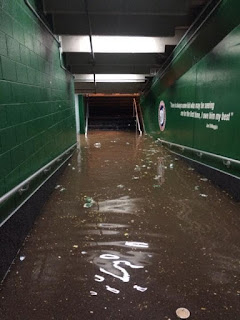 We are still waiting for the contractors to return to our house to finish the repairs to the basement. Last week they tore out the baseboards and drilled some holes in the sheet rock to dry them. But they won't be back until next week to finish up the repairs and clean up. Thus my basement has been left in a state of disarray.
Since my model building shop and most of my Aquia Line expansion is not accessible right now for construction work, I decided to do some benchwork building in the garage for the HO layout that will reside in my office. 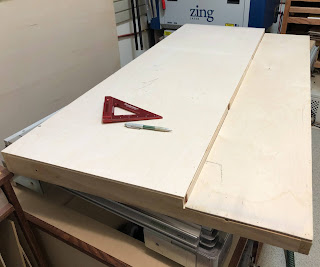 I built two 58-inch long by 30-inch wide frames with a 10 inch wide section that is recessed for  water front to hold the ship models.  These frames started out as game tables.  I converted then to my module frames. They don't have legs as they will sit on some IKEA shelves that I have in my office.
Ten out of 30 inches might seem like a lot of real estate to devote to the ships that could be used for track. But displaying my ship models is one of the prime objectives of this mini layout/module. It will also be a show case for Alkem Scale Models products.  And reaching in 30 inches to uncouple cars is not good. So the track will be along the front with the ships in the rear.
I had an idea to put a staging yard off the to the left. But now I am not so sure I will bother.  I need to come up with a track plan that is more self contained.  The track plan below shows  what I was thinking. 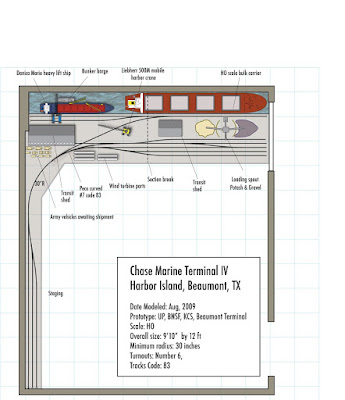 One issue I will have is maintaining access to the electrical panel.  In fact, I have had several foundation water contractors look at my house in the past few days to get quotes on how to reduce the flooding in the basement. Several have suggested the need for a separate circuit for an additional water sump pump That means my main panel will need to be expanded. Last year I added a secondary panel in my garage with 220V and 60 amps. That secondary panel used the last open spaces in my main panel.
I also want to add a whole house surge protector as we have had problems with lightning damaging the capacitor on on air conditioner.
The bottom line is the HO layout will need to be removable or at least not interfere with access to the panel. So no coved backdrop in the corner of this layout. I'll probably go with a hand painted sky and some cut outs.
3 comments:

We spent last week in Birmingham Alabama helping my daughter and son-in-law with home remodeling projects. They bought a 103-year old house. It is in a good shape in a great neighborhood. The home has a view of the city sky line to the west, including Sloss Works. In fact, the original builder of the home was a owner of a coke by-products factory.  The trip was a lot of fun, and we got several home projects complete. I made a short video showing some of the fun including some trains
.
We were home for a few days, when once again we suffered an intense rain storm. I don't think I have ever witnessed a lightning and thunder storm as long and sustained as this. In the midst of that, our air conditioner failed. Luckily that was a simple fix as it needed a new starter capacitor. But around midnight, our sump pump again was overwhelmed. I woke up in the morning to puddles and silty clay residue from about 1 inch of water in the basement.
Fortunately, the ceramic tile was unaffected. and no expensive stuff was destroyed, just a few old pictures that were inadvertently stored on the floor in a closet. The restoration crews have installed dryers and fans. Tomorrow, we will find out if they need to replace any sheet rock or moldings.  On Saturday I have a contractor coming in to discuss how to reengineer the basement to prevent this from reoccurring. Obviously, the measures we took last fall were insufficient.
Meanwhile, I starting hosting a play by email game for eight for my friends and family. The game is a conversion I  did of Johnny Reb III from miniatures to hex board game. Yes, I was inspired by the Gettysburg game that I am still playing. I actually started this project over 20 years ago while my friend John Hill, the designer of Johnny Reb I, II, II and IV,  was still alive, but never got it finished. Now John is gone, but his game lives on. My version of the game is tactical and based on the Battle of Brice's Crossroads in Mississippi. It was a decisive victory for the rebels, but was actually much harder fought than the result indicated. We will see how it goes in our replay.
One really cool aspect of it is that my friend Don Ball converted my graphics to a VASSAL module. That means we can play the game using a map and counter on our screen versus using paper and pencil. Don has lots of experience with VASSAL and he did the conversion in a very sort time. He is also playing one of the Union commanders.
If we like this game, it would not be hard to develop other scenarios.
1 comment: