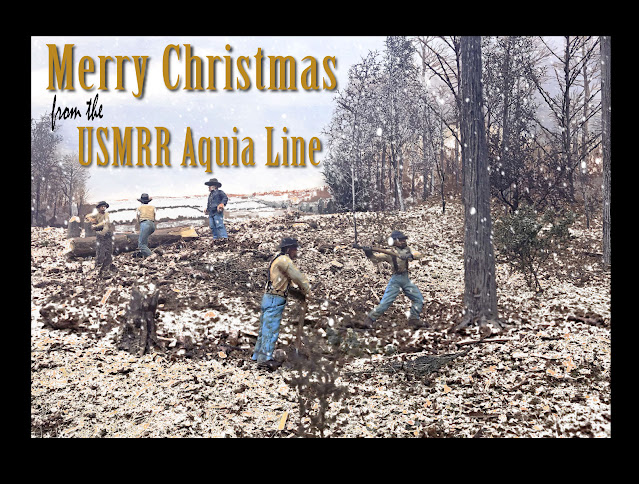 We hope you stay toasty warm and safe this holiday season.
1 comment:

Last weekend I helped Doug Gurin start building the benchwork for his long planned layout.  As many folks know, he has been planning his layout for years. He wrote an article in the first issue of Model Railroad Planning that describes his basic concept . That was 1996. The layout has evolved into a single deck design with staging in one room and the main switching areas in the other larger room. But the basic idea remains.

We had a good time building open grid benchwork in his basement. It is an older house with decidedly unsquare and non-plumb walls. But in about 8 hours we got the benchwork for his staging area done. Hopefully, we can continue to build the rest of the benchwork in early 2022.

Doug is looking for help with his wiring switch motors as he plans to use Tortoises for most of them. If you want to help, please let me know and I can pass it on.

Meanwhile, on the Aquia Line I installed most of the fascia for the extension. I wondered if this was a good time as I still need to hand lay some track going into the tunnel. But I decided to make the cuts of the long pieces while I had the tools out.  Plus, an installed fascia helps make an unfinished layout look a lot better.

Track laying continues on Falmouth. I decided to install the tracks from the rear to the front. So the stub siding to the freight house and most of the passing siding are now installed.  Two mroe turnouts to go.

I have also been rethinking the engine terminal. After several changes of mind, I am going back to what I originally planned, which is very similar to how I had it in the other room. 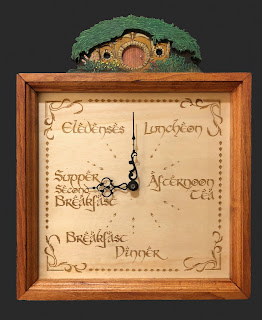 Meanwhile, I have been getting ready for the holidays. My niece is a Lord of the Rings fanatic, so may wife suggested a present that includes the hobbit meal times. The idea morphed into a clock that displays the meal times instead of the hours. I made it in my shop using the laser to cut some of the pieces. It was fun to make the hobbit home on top.

What's in a Photo? 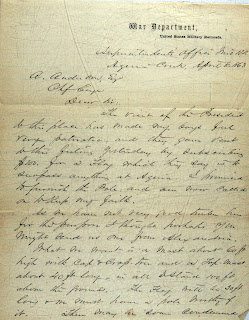 Dec. 28, 2010, I wrote about a letter I found at the National Archives that discussed the flag pole. Here is an excerpt from the post, "This letter is from W. W. Wright to Ada Anderson details a request for a flag and flag pole for the USMRR. According to the letter, the men of the USMRR were motivated to buy and display a flag after President Lincoln's visit to Aquia Creek in April, 1863. But this will be no ordinary flag. Wright calls or a thirty-foot flag on a 100- foot tall, two stage mast. That would be over two feet tall in O scale. I did not see this flag pole in any photos, so it is possible it did not get built. "

Well, now I realize I have seen the flag pole.  This photo was taken during the evacuation of Aquia Landing after the Battle of Chancellorsville and the start of the Gettysburg Campaign. Here is an enlargement of the area where the wharf meets the shore.  Note the flag pole. If I noticed it before, I must have subconsciously dismissed it as a ship's mast. But that flag is behind buildings that I know are on shore, so the flag pole must also be on shore. 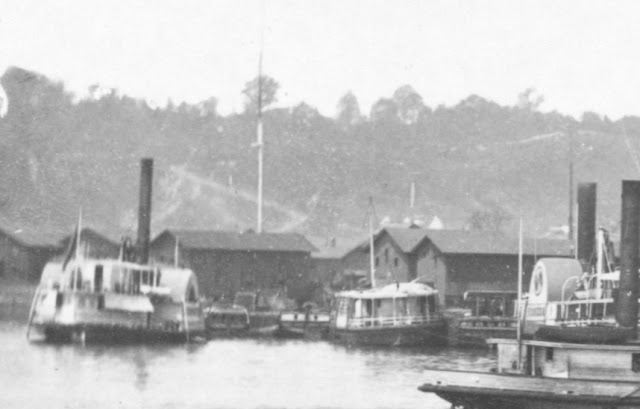 The upper mast looks like it might be a darker color. So I need to paint my flag in a similar manner.
Meanwhile, track gangs have been busy on the expanded Falmouth. About 30% of the track and switches are now down.