On Saturday after the Great Scale Model Train Show JB Wielepp, JD Drye, Brian Brendel and I visited Chris McCheseny and his HOn2 layout. Chris is well known in Maine narrow gauge modeling as the builder of the WW&F waterfront modular layout and other models. Chris is continuing to work on the WW&F with a home layout that is designed for moving. He and his wife plan to eventually move and take the finished layout with them.

He models in HOn30 and he scratchbuilt or  rebuilt most of the locos.  Along with the Narrow Gauge in the Sheepscot Valley series, in 1997 he wrote a book called the HOn30 Locomotive Handbook that describes most of his techniques. Jeff Bissonnette rebuilt the WW&F #7 and #9 to be equalized.  Chris finished up the rebuild and painted them.  Other locos Chris scratch built.

The key to modeling in HOn30 is building locomotives that run reliably. Chris seems to have solved that issue with some absolutely amazing models.

Jeff Bissonette documents some of his work on his blog and it is a must see if you are interested in fine scale engineering.

The WW&F is one of my favorite railroads. I dedicated a chapter to it in my first book on mid sized layouts.

I plan to build a 4-4-0 in the future and I would like to try an equalized chassis. I hope to learn more about this in the future.

Gerry and I displayed the McCook's Landing layout at the NMRA MER 2013 Regional Convention. This year they called it the C&P Junction.


It was a great show. We had lots of folks see the layout and nearly everyone seemed to enjoy it. Our biggest fan was probably Wayne Matthews from Fredrick, MD. He was a second grader who spent a good part of Saturday along with his dad, Herbert "Matt" Matthews, watching the trains run on McCook's Landing. Wayne's favorite prototype railroad is the narrow gauge loop at Busch Gardens. But at the show he liked McCook's Landing the best.

He wasn't the only one that liked the layout. The NMRA Judges awarded the Biscuit Run Section the First Place Module Award (due to the somewhat arcane NMRA contest rules, Gerry was only permitted to enter one section, Biscuit Run, in the contest. We could not submit the whole layout for voting).

Nonetheless, the layout did receive the Blue Lantern Award. Martin Brechbiel, the MER NMRA contest coordinator told me it was the first time the Blue Lantern was awarded to a layout. In case you are like me and never heard of the
Blue Lantern Award here is the official description, "The Blue Lantern is privately sponsored and chosen by long time MER modeler Terry Nesbit and his Narrow Gauge Car Shop. The Blue Lantern is given to a model best representing branch or private line equipment or facilities, which contain no more than forty (40) percent commercial parts. The prize—a genuine railroad lantern—is presented to the winner by Mr. Nesbit." Gerry took the lantern home to display.

We did not host any formal op sessions at the show. We just ran the trains in display mode. We got about 4 hours service out of the battery on Whiton. The Fury did not take a full charge and only lasted a few minutes. I need to look into why that happened as it ran fine at home.

I presented two talks at the meet,  "Intro to RRs of the Civil War" and a layout update on the USMRR Aquia Line, McCooks  Landing and a sneak peek at the WWI layout, "Cambrai 1917."

One of the things I really enjoyed at the show was meeting lots of other modelers. I heard a lot of interesting stories from folks. We in the DC area are blessed with an amazing array of talented and smart people that do great work. It was fun to learn some of their stories.

On Sunday we had an informal open house. Gerry Fitzgerald, Doug Gurin, Paul Dolkos, Bernie Halloran, and Neil Besougloff stopped by for a lengthy visit. Both Bernie and Neil were first time visitors. I put Bernie, Gerry and Doug to work. Gerry made duckboards, Bernie glued down grass clumps and Doug made fascines for the tanks. This was all for the WWI layout.

I love seeing other Bernie's, as the name is kind of rare these days.  I rarely get to say, "Hi, Bernie." I hadn't seen Bernie H since Granddad's hobby shop closed about 6 years ago. It was fun to catch up.

Neil is the editor of Model Railroader Magazine. He got a chance to run the layout. Neil likes sports cars so we talked cars as well as trains, rapid prototyping and other topics.

Alicia made brownies and everyone got their share, plus some to take home.


Last weekend Ramon Rhodes and his wife Barbara visited the layout. Ramon lives in DC area, though he and Barb are both from NY. We had a fun visit. They both a chance to run some trains. Ramon specializes in modern prototype railroads, but he is also known to dabble in 1/35th military models. Barb would like to build a garden railroad at some point.

On Monday Charlie Getz and his wife Margaret visited the USMRR Aquia Line. Charlie is the current President of the NMRA. He models in HO. They were in town for the MER Convention and then are heading to an RPM meet. 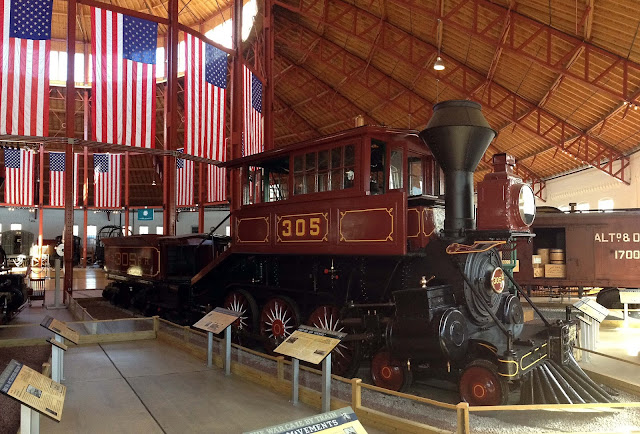 Last weekend I lead a tour group to the B&O Museum. The kind folks at the museum opened it early for the group so for two hours we had the place to ourselves.  The museum provided tour guides, so I was able to wander around and soak in the atmosphere. It brought home to me how magical that museum is.