Limbers are like the pick-up trucks with a tow hitch of the Civil War.  They were used to haul cannons, caissons, battery wagons, and even a coffee wagon.  We have several period photos showing rows of limbers and other carriages lined up at wharves and railroad depots as in the scene above at City Point, VA.
I had perviously made cannons using cast metal, laser cut wood, and photo etched brass parts. I ordered some 3D printed limbers to go with the cannons from a vendor in Europe. Unfortunately, when those parts arrived, they were not printed at the correct scale. They were about 20 percent too big. Trying to redress the problem with an overseas vendor was not practical. So I still needed some.
A few months ago, Gerry Dykstra, from the ACWRRHS Group,  sent me a copy of the 3D print file he drew for a battery wagon. Each artillery battery had one battery wagon along with a battery forge and 4 to 6 guns .
It was a simple matter to scale the file to 1/48th and print on my 3D printer. The model is very nicely done. But, he did not include a limber. He did include a limber pole, an iron rod used to support the tongue of the wagon when the limber was not attached.  However, I believed I needed a limber to accompany it and my artillery pieces.
I decided to draw one myself. It is not that complicated a vehicle and it would be good practice for me in Fusion 360. Gerry already drew the wheels, so it was fairly simple. See the second  drawing.
I printed a test model. It need just a few modifications and it was good to go.  Then I printed  7 more.
I decided to not include the ammo chest handles in the print. I will add those with wire. But I did include the locating holes to simplify drilling the holes.
This was a fun project that didn't take too long. Now, with limbers taken care of, I need to make the supply wagons. I started making a supply wagon using my cast wheels and laser cut parts. But I think a 3D printed version would be better able to show the detail on the wagons such as the tiny rivets and bolts.
6 comments:

I just got back from a week long road trip with my brother Rob to Rochester, NY to attend the National Bonsai Exhibition. My brother has exhibited at this show for many years now. He usually drives up with a crew from Florida and they spend a night at my house.  This year, his normal co-drivers could not get tickets due to limitations in advance registrations from COVID. So I volunteered to help with the driving. Turns out I was also able to attend the show.

The trip started with a round of golf at Pohick Golf Course where Rob defeated Alicia, Nancy and I in a scramble. Either we stink or he is good.

Then we stopped by Gunston Hall, the former home of George Mason, to check out the gardens. Unfortunately, the gardens were closed and there were archeologists tearing up the grounds looking for artifacts. However, I did get some pictures of the interior of the kitchen and laundry. I assume civil war era facilities would be very similar. Good detailing ideas there.

Next we visited the National Museum of the Army at Fort Belvoir. The museum was practically empty and we enjoyed our visit. Alicia was especially impressed with the IED exhibit, maybe because she was involved in an IED attack at a gate in the Green Zone in Baghdad when she was in Iraq.  I like the museum's focus on people. The video about the Newburgh Incident and George Washington was very good. This is probably one of the most significant events in US history, yet very people know about it. It highlights George Washington's brilliance as the founder of the United States.

The next day we drove to Rochester stopping at Gettysburg for a half hour to check out the battlefield.  The terrain in upstate New York is quite beautiful as we drove through the Finger Lake region.

The Bonsai exhibition was a curated display. The trees on exhibit are selected from applications around the US. My brother had exhibited trees here for many years and he says he has only repeated his display once. He has an extensive bonsai collection.

There was a photographer doing 3D scans of the exhibit. His results are now viewable on line here. I highly recommend you take a look as the 3D technology allows you to walk around the exhibit as if you were there. The photographer told me that similar tech is available on newer iPhones. I think a view of my layout like this would be very cool. We also managed a round of golf in New York at a course built on an old farm. The club house was a barn, literally. Despite the simple club house, the course was in a park like setting with excellent greens. 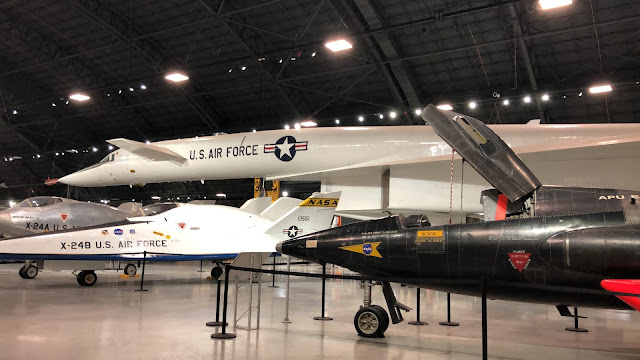 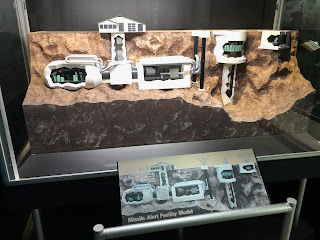 Next stop was the USAF Museum in Dayton, Ohio.  It is an impressive museum as it is huge. There are 4 hangars filled with aircraft, missiles, and other aviation technology. We couldn't think of a significant USAF aircraft that wasn't on display. (OK, maybe 2 the C-5 and the KC-135) This was my brother's first visit and my second. So I focused on watching the videos and reading the plaques on things that I missed the first time through. This diorama of a ICBM silo was of interest to me.

Next day we headed to Rocky Gap State Park in Maryland to play at the Jack Nicholas designed golf course. I had a good game with 3 birdies. It's a nice course in a beautiful setting. Afterwards, we back tracked to Cumberland to get lunch and do some rail fanning.  We watched the hostlers spin a new Wabtec engine on the turntable. A west-bound container train was leaving the yard, but we didn't chase it as we needed to head home.

We did make stops at the Sideling Hill cut and at Fort Frederick, MD. This was an early fort used to protect settlers during the expansion west.  The fort was once in private hands. Now a state park it is in a beautiful setting near the Potomac River.

Back home I continued work on the model of the slave pen for the Alexandria Museum of Freedom. I am almost done with it.  I hope to wrap that up in a week or so and get working on my backlog of layout and other projects.

We also survived another flash flood that left parts of Alexandria with more flood damage. The storm drains are now an issue for the next election.

On Sunday, I  presented a zoom clinic about my layout to the Louisville Division of the NMRA. It is interesting that Fred Soward, the president of that division, is married to Barbara Walthers, who is a second cousin with my wife.  Barbara is also one of the few women that participates in model railroading as a hobby.  We actually first meet at a NMRA convention.

This is getting more like the weather channel than a model railroad site, but I suspect many of you are wondering how we fared in the wake of Hurricane Ida 2021.  Turns out we very were lucky as the main rain bands passed about 2 miles north of us.  This high resolution map showing total accumulated rain in the past 24 hours shows how the heavy rain just missed us in Alexandria. We received less than 2 inches total rain spaced out over several hours. 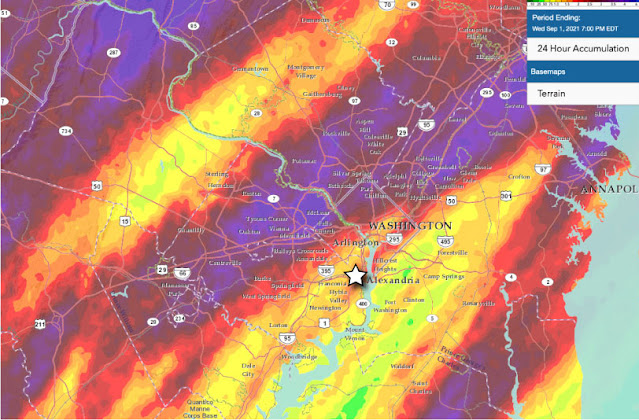 I am pleased to report no flooding in our basement. My sympathies to those that have flooded. We know how devastating it can be.
Last week I presented a clinic via Zoom to the Potomac Division of the NMRA with an update on the Aquia Line. Readers of the blog know all about this, but they will post the video on line at some point in case you want to hear my same old bad jokes.
I am scheduled to do another Zoom clinic for the NMRA Louisville Division on 18 September.
2 comments: