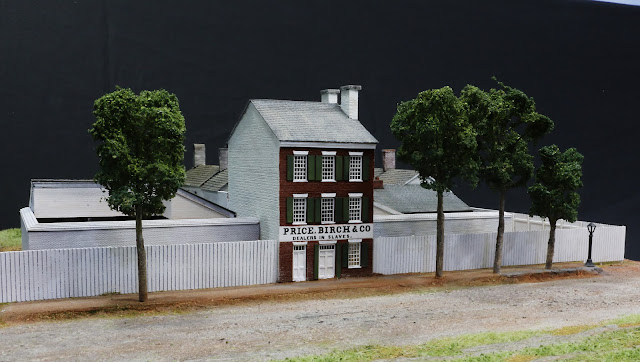 Earlier this year Alexandria's new Freedom House Museum hired me to build a model of the slave jail that was located at the corner on Duke and Payne Street. This slave jail, also called a slave pen, was used by various slave dealers for about 25 years. When the Union Army occupied Alexandria, they took over the facility forever ending its use as a slave pen. In a touch of bittersweet irony, they used it as a jail for some Confederate prisoners, as well as misbehaving Union soldiers.  For a full history of the facility,  please see this link.

This was a challenging model to build both for technical and emotional reasons.

The Union Army made many changes to the building during the time of the civil war. They also took several pictures of the buildings. The museum wanted the model to depict the time when it was used as a slave dealer. But we had almost no photos from that era. Luckily we did have an extensive archeological study of the building done by Benjamin Skolnik, of the Office of Historic Alexandria. We also had the results of an historical architectural history study by Susan Pommerer of the Smith Group. They did an extensive review of many existing records. They also did a detailed measurement of the existing structure. Included in the study was a laser scan of the building, but that did not provide much direct useful information to me as the model builder. More valuable were the isometric and elevation views that Susan provided to me.

Even with those excellent resources, there were many details that we were not sure about, particularly in the backyard. We hope this model is an accurate representation of the building as it stood just before the Union Army ended slave dealing in Alexandria for good.

The model will be on display in the museum later this year. 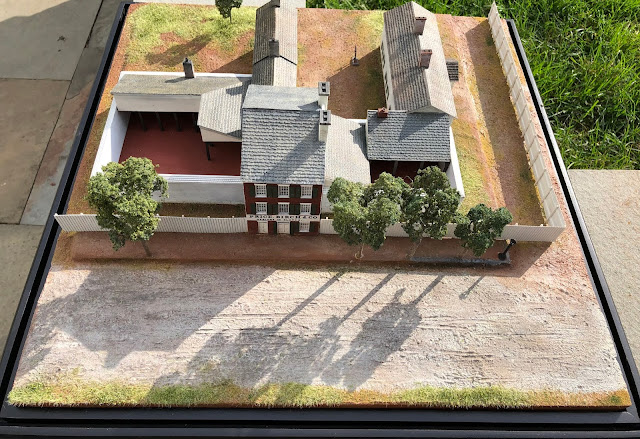 Last Saturday a group of us from Northern Virginia made road trip to the Richmond suburbs to see and run some trains on Mike Pulaski's layout. He is building a nice HO scale double deck layout  depicting a freelance railroad set in upstate New York. Mike agreed to let me shoot some hand held iPhone video of the visit and the progress on his layout.

On Sunday Mike Spoor stopped by the Aquia Line. He needed some help with the battery installation we did last year in one of his locomotives and box cars. This time, we removed the plug-in socket between the box car with the battery and the locomotive. I hardwired the two cars together. To make turning the battery on and off easier, I removed one of the side doors and reinstalled it with a piece of tape. That way he can open the door to get access to the magnetic reed switch that controls on and off that is inside the boxcar.

Tonight I finally got the final coat of scenery on the  model for the Alexandria's Museum of Freedom. Tomorrow I'll do the final touch up and it will be ready to d be delivered. I will also take some photos when it is ready.  I am looking forward to doing some modeling on my own projects. This museum project was a lot of work.

A rose by any other name...

I asked my friend John Ott for his advice on renaming the locomotive General to use on the USMRR Aquia Line. John is the foremost expert I know on early locomotive history. He provided me with a interesting analysis. Here it is. 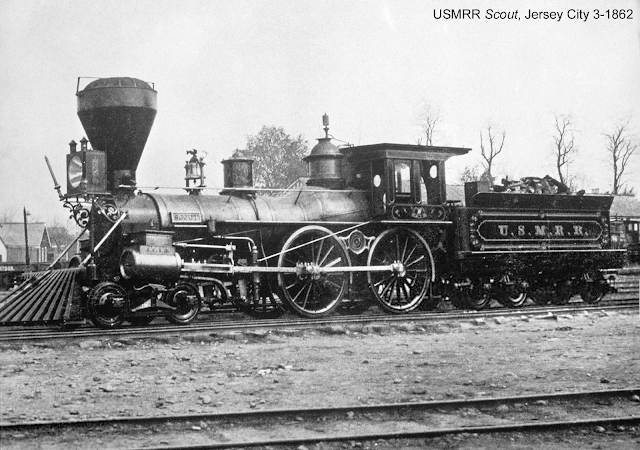 Well—if it were me, I'd rename your engine Eclipse in a heartbeat. Reasoning follows:

There weren't that many Rogers engines on the Dept. of Virginia lines. None were 2-steam-dome Rogers resembling General except for maybe Warrior, which never made it to Aquia and got rebuilt into the Lt. Gen. Grant in 1864. Osceola was a Rogers, but you already have an Osceola. There were a couple more single-steam-dome Rogers engines bought after the Aquia line was history.

That leaves you with Lion or Eclipse. Lion was an 1862 New Jersey L&M engine with a single steam dome and oval windows in the cab—in fact, it's my theory that the cab of the Lion was used on the rebuilt Lt. Gen. Grant.

That leaves Eclipse. Eclipse was a single-steam-dome engine built in 1862 by Jersey City Locomotive Works. McCallum's end-of-war report is wrong—he has it listed as another New Jersey L&M engine. It was rebuilt and renamed Scout after Aquia, and was later used in North Carolina

So Eclipse is the lesser-known engine that already has one mistake in its record. The name Eclipse also fits the General's nameplate better than Lion. (This is important!) You can just say that Eclipse and Scout were actually two different engines. In this scenario, Eclipse was cannibalized to rebuild Scout, which is why it no longer appeared on McCallum's for-sale list.

Sometimes I think half the fun of building a model railroad is all the rationalization we come up with to hide our compromises.

I like the sound of Eclipse, but Warrior is also a good possibility as its is the right builder but never ran on the Aquia Line.

Note that the US Government sold the engines for more than they paid.

The General is Back! 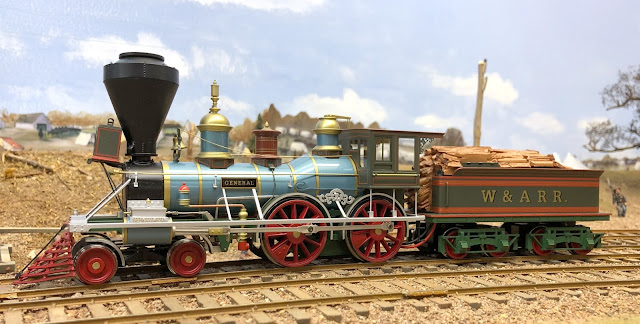 Many years ago I acquired a copy of the SMR Trains General from Charlie Taylor. I missed out on the original production run but Charlie was willing to sell me one of his excess. I had the locomotive for several years as it was a beautiful model. But once I had 5 other SMR locomotives, I began to believe that I really didn't need that many. About that time, I heard through Charlie Getz that Bob Brown, of the Narrow Gauge and Short Line Gazette, was looking for a SMR General. I agreed to sell my copy to Bob.

Then last week, George Wallace visited my  layout. George was in the process of liquidating his vast collection of O Scale models. He had a bunch of  civil war era SMR locomotives and rolling stock. He offered them to me. I decided to purchase just one, the General.   Why? Partly to help out my friend and partly because I missed the original model. It is very attractive and runs great. The model arrived yesterday. I placed it on the layout. The model looks great but will need some tuning up. It doesn't ride level, the headlight is broken and headlight box is crooked. I will need to add a sound decoder and keep alive too. Then will come the hard, at least emotionally, part, I need to re-letter it for the USMRR.

In searching through my records, the following locomotives operated on the Aquia Line in the time period I model, Fury, Fred Leach, Ed Wentz, Victor, Eclipse, Manfred, Osceola, and Lion. I also saw a telegram that mentioned the locomotive Gen. Sickles but I saw no mention of it in the conductor reports. So that telegram might be a garbled message.  Of these locomotives Leach, Wentz, Fury, Osceola, and Manfred seem to be daily work horses with the others showing up less regularly.  I already have locomotives Leach (under construction), Fury and  Osceola. That leaves me Lion, Ed Wentz, Victor, Eclipse, Manfred as possible names. The next step will be to find out which of those locomotives comes closest to the Rodgers General. 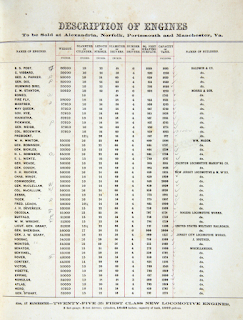 According to this roster from 1865 of USMRR engines, the Manfred was from Norris & Sons, Wentz and Sickles were  made by Mason, and Victor was listed as made by "miscellaneous." The Lion and Eclipse are not listed.
The General was made by Rogers, Ketchum, and Grosvenor. If I'm lucky Lion or Eclipse were made by Rogers. That way I can get the locomotive manufacturer and list of Aquia Line locomotives to match up. Otherwise I will have to pick a name from the list, or make one up. 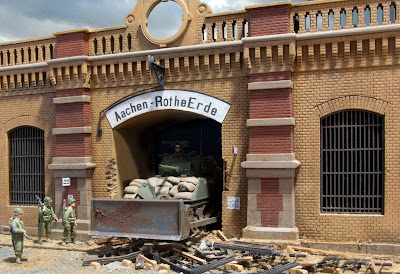 I attended the National Capitol Model Soldier Society Annual Show 2021 last weekend at the Springfield Hilton Hotel. This was their 60th show and first after COVID. There were over 250 models entered from 36 different persons. NVNTRAK was there with a small TTRAK layout.

It was fun to socialize with fellow modelers. I also picked up a tube of new oil buff-able metallic paint from one of the vendors. It can be polished when dried. I am looking forward to trying that on the brass parts of the Leach that I am scratch-building. 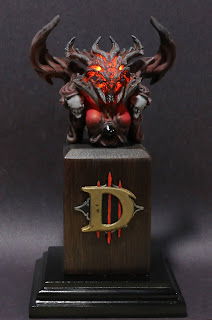 I entered 4 models in the contest and to my surprise, received two gold and two silver medals.   The biggest surprise was that the bust of Diablo got a gold medal. I included it as a lark, as I like the concept of it, but the paint scheme is quite simple. It is supposed to look like an animated stone creature. I did add an LED light in the interior to create a glowing molten look. Perhaps that is what the Judges liked.

The other gold medal was my Aachen Diorama.

Model contests are very subjective, so I don't get too worked up over them. But it is nice to receive recognition from your fellow hobbyists for jobs well done. 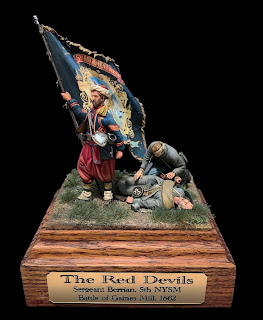