I encountered some interesting surprises this weekend while laying track for my O Scale ACW layout. I noticed in a Library of Congress photo of yard tracks in Atlanta that one switch stand controlled two turnouts that met points-to-points. See this LoC Photo: 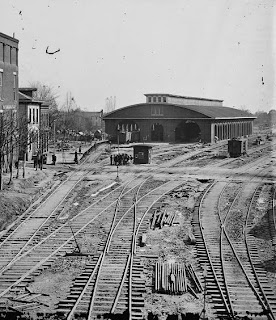 The movable points in this arrangement have four rails, not the normal two. Since I had this turnout arrangement on my layout, I decided to copy it without really thinking about how it worked all the way through, I assumed the prototype guys must know what they were doing. This led to a series of unexpected events.

First, I learned that the switch stand to control the points must have three positions, as there are three routes through the turnout. I solved this by laser cutting and scratch building a three-position switch stand with the correct lateral throws. This worked so well that I decided to retro fit all the existing switch stands on the layout with homemade ones instead of the brass PSC Harp Stands I had been using so far. The PSC switch stands have a vertical motion lock as well as a rotating motion. The vertical movement made it hard to get a throw bar that was easy to adjust, as the clearance for the lifting motion introduced slop into the mechanism. My home made stands, based on a drawing in Alexander's book, lock in the same direction as the axis of rotation of the lever. So the throw bar does not lift. It only moves a tiny amount perpendicular to the throw direction. I may release these as Alkem Scale Models product. Please let me know if you are interested.


Shows the overall arrangement of the turnouts 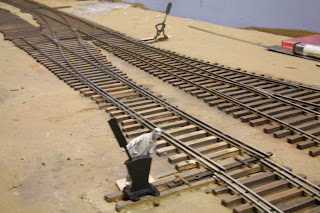 Showing the center position of the 3 way switch stand

The third position. Note the hanging rail end. You have to be careful when lining up your route. 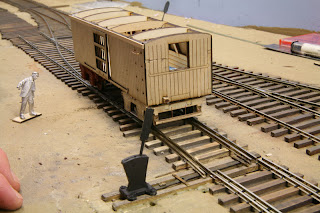 Then I realized that the electrical polarity of the frogs depends on which way you approach the turnout regardless of the position of the points. A problem the prototype doesn't have. This was not immediately obvious to me, but became apparent once I put the switch in operation and began to fully understand how it works. So far the only solution I can come up with that doesn't involve flipping toggles, is a set of auto-reverse units on the frogs to control the polarity. That way the operator only has to worry about aligning the switch and not have "model RR thoughts" about the flipping toggles for the desired polarity.

In general I am finding these stub switches very easy to hand lay. The frogs are the only pieces of rail that you have to file to a point. The rest are just measure, cut, fit, and check gauge. I even did a curved turnout this weekend and it works well.