SS Armenia at the Mariners' Museum

In late August 1999, my family and I visited the Mariners' Museum in Newport News. While there I took a few photos, mostly shots of the kids. These were filed away in slide notebook.

I happened to be looking through my non-digitized slide notebooks for another purpose and came across these shots of the SS Armenia, a Hudson River side wheel paddle steamer from the 1850s. The model was on display at the museum. There is a set of plans available for the Armenia Paddle wheel steamer, so it is somewhat popular with model builders.

It is amazing, but this was the only ship model I photographed while there. Coincidence or a foretelling of my current project?

I took these shots hand held with 64ASA slide film. Some of them came out pretty well considering the conditions. 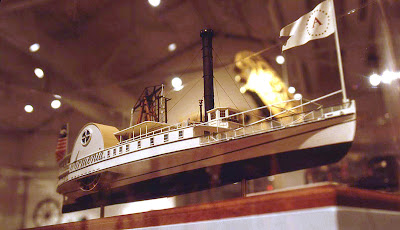 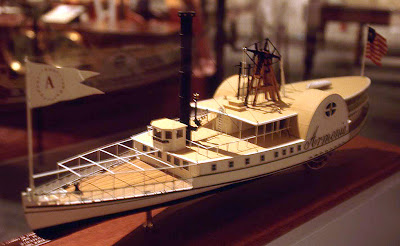 The SS Armenia was a popular boat at the time. Here is a brief history from an auction of a painting of the ship. http://www.christies.com/LotFinder/lot_details.aspx?intObjectID=5036924

The Hudson River Day Line steamboat Armenia was built in New York City in 1847 by Thomas Collyer. Registering 528 tons she measure 185 feet in length by 28 feet in breadth by 8 feet depth hold. At her launching she was the largest and finest steamship on the Hudson River. She offered luxurious on board amenities, including restaurants, barber shops, parlors and live music which included a steam calliope- a musical instrument intended to attract passengers from competing steamers. She entered the New York to Albany day service in 1848, but was regularly withdrawn for other routes, and it was some years later that she began a number of continuous seasons on the run. She was a fast steamship, but by 1859 larger rivals had entered service and the decision was made to lengthen Armenia to 200 feet.
On May 1st, 1869 she opened the new and shorter New York to Rondout route and continued to be a popular vessel. In 1875 she opened the New York to Albany season, and the following year ran between Brooklyn and Newburgh. In 1883 she was sold to the Henry brothers & Co. of Baltimore and used as an excursion vessel between Washington, D.C. and Lower Cedar Point, where the Henrys owned a hotel and resort. While laid up for the winter at Alexandria, V.A. she caught fire on January 5th, 1886 and was scuttled to put out the flames.

James Bard, a famous 19th century American maritime artist,  also did a painting of the Armenia. The Athenaeum web site has a 106 examples of James Bard's paintings available for viewing. It's worth a visit if you like side wheel paddle steamers and other period ships.

Here is a R/C SS Armenia built by Sargisko at
http://www.rcgroups.com/forums/showthread.php?t=564557  He posted some more photos of the model at that link. 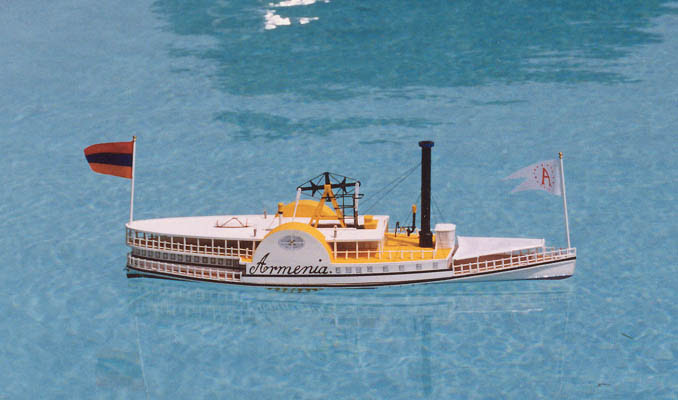 The Mariners' Museum was really very good. Since it has been over 10 years, perhaps a new visit is in order. I have read that they have done a lot with the USS Monitor restoration since I was last there. That in itself makes it worth the trip. One bummer I encountered in dealing with the museum was that the they were totally unwilling to help me research ship plans when I contacted their research department last year.