Aquia Line in the Micro-Mark Catalog 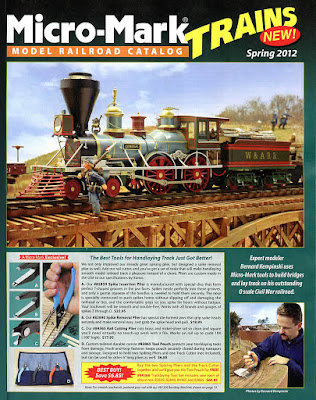 The Spring 2012 issue of the Micro-Mark catalog has a mention of the USMRR Aquia line with a couple pictures including one of me spiking track. I do use Micro-Mark spikes and their pliers, along with other tools and supplies too.

Just for the record, I don't hold the pliers the way I show in the photo. Tom, the proprietor for Micro-Mark, insisted I hold it like that for the photo, as that is the "official" way use the tool. However,  I tend to use an overhand grip when spiking.

Not visible are the Micro-Mark spikes. The batch I got from Micro-Mark have the smallest heads of all the ones I tried. I have not used any of the etched spikes though. I understand they are the closest to scale of any spike.

How many will notice the W&A loco with Union soldiers?