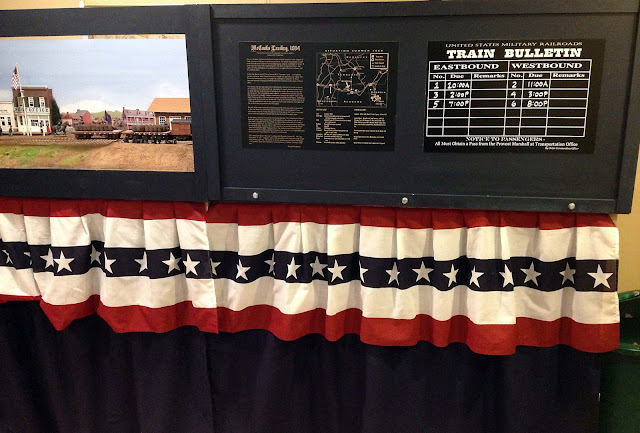 Over the past few days I finished engraving the information plaque and train bulletin for the layout. 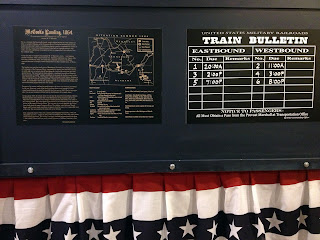 The information plaque describes the purpose of the layout and sets the historical background. The map shows where our we located our fictional landing.

The train bulletin shows the actual schedule we will follow. The schedule is written with a chalk marker so it is easy to change if we need to. We can also use it as a sign-up board as we will record the operators names in the remarks box.


Here is a copy of the text on the information plaque.

The great question of the campaign was one of supplies.
General W. T. Sherman

This is a fictional, but historically based, model railroad layout set in the summer of 1864 in northern Alabama on the Tennessee River. The layout demonstrates in scale model form how the Union's overwhelming logistic capacity contributed to victory. It shows how the Union Army Quartermaster Corps built or repaired railways, ship yards, saw mills and depots in occupied territory to support the Union advance into the southern states.

At the time that we model Union General Sherman’s Army was fighting outside of Atlanta, while Union General A.J. Smith was operating near Tupelo, MS. The main Confederate Army, now under the command of General Hood, opposed Sherman in Georgia, while General S.D. Lee had a smaller army in Mississippi.

The landing was near the small town of Brendelton (fictional) on a peninsula off a tributary of the Tennessee River, surrounded by marshy land with dense forests on north and west. a narrow strip of land along the creek to the north-east provides ground access. The town had one main industry, a combined sawmill and shipyard that specialized in "puddle" jumper steamboats to navigate the shallow rivers of the upper Tennessee. The town began to build a railroad toward Athens, Alabama to connect with the Nashville and Decatur RR.  During the railroad-building boom in the 1850s, the stockholders had the line graded and built some abutments for bridges but did not finish the project before the war started.

Because of its remote and hard to reach location, the town was relatively unscathed by the war. However, some of the local riverfront farms were burned by Union water-based troops in revenge for guerrilla fire from area in 1863. Due to its geography, it is an easy location to defend and an ideal location for a supply depot.

In late spring 1864, the Union Army moved into the area. The United States Military Railroad quickly laid a branch line to Brendelton on the planned right-of-way. They built a standard Howe truss bridge over Biscuit Run and trestles over some of the swamp ground. They also rebuilt a sawmill to use in constructing boats and barges for use on the upper Tennessee River. This was one of several shipyards the Union Army built along the upper Tennessee River. The shallow water between Muscle Shoals and Florence made steamboat navigation from the lower river impossible most of the year, thus necessitating the shipyards so far forward.

They named the facility McCook's Landing after Brigadier General Robert Latimer McCook (December 28, 1827 - August 6, 1862), who was killed in this area a few years earlier while battling guerrillas. The facility is strongly fortified and garrisoned with about 1,500 soldiers, about half from newly raised regiments of African-American volunteers.

Violet Kempinski gets special recognition for the drapes and bunting.

Special thanks to Co-Builder and Co-owner Gerry Fitzgerald