I finally had a chance to work on the layout this weekend.  First, I looked at some ways I could get rid of the Borax peninsula by making the silos and wharf parallel to the back wall, similar to the way I first had the layout, but with deeper bench work. Using the ship and silos as mock-ups I realized none  of the ideas were satisfactory, so I decided to leave the track and benchwork as is. 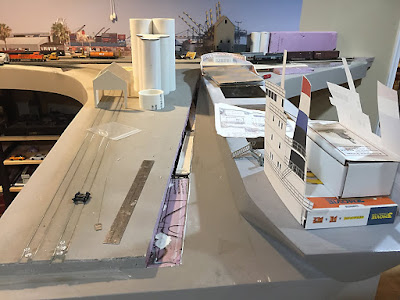 However, I decided to modify the borax wharf to allow a bit more sea room for the ship.  The tracks stayed where they were. I removed a wedged-shaped sliver from the wharf. This allowed me to move the ship a few inches away from the edge of the benchwork.

The task was easy because I used foam and task board for the terrain in this area. Both are easy to cut with a knife. The ship's hull will hide most of the cut area, so patching the gap will be easy.

The ship looks better with a little bit more water around it. The extra water surface will help protect the fine details on the ship from errant sleeves and elbows as people move in the narrow aisle between the borax peninsula and  Aquia Landing. 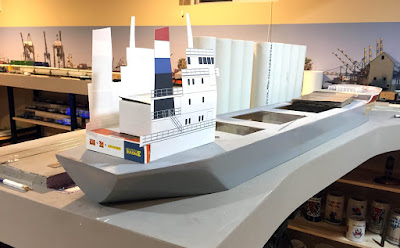 I also purchased 12 more feet of 3-inch PVC pipe to make bigger silos. The pipe is much less expensive if you buy it in longer pieces.

I cut the pipe on my chop saw, a messy job that took more time to clean up than to cut.  The new silos are 10.75 inches tall and 3.5 inches OD. The new silos better match the cargo ship in volume capacity. They also act as a nice view block.