Last week was the latest road trip - a solo drive to the ChicagoLand RPM meet in Lisle, IL via Lexington, KY. It was a whirlwind trip. 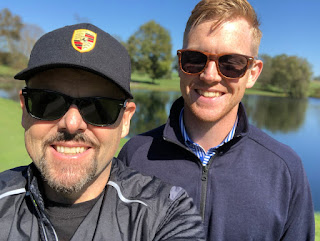 The first stop in Kentucky was to see my son, Chase, and his girl friend, Mizuki.    I arrived in Lexington after about 10 hours of driving. The next day Chase and I played golf at the UK Wildcat course. UK has two nice golf courses. MIT didn't have any as far as I know.  While we golfed, we heard several trains go by. Lexington is a busy railroad town, as well as being a charming small city. The bluegrass country is beautiful and the weather was crisp and sunny.

The next day I drove up to Naperville to check into my hotel. I did not stay at the RPM hotel, as it was booked by the time I remembered to make a reservation. (Note to self, try to remember to book early next time). I got to the meet at about 6:00PM on Thursday. Most everyone was at a banquet or at dinner. So I set up some of my models for display and went to my assigned clinic room to get ready for my talk.

I presented two iterations of my clinic, "A High Tech Approach to a 19th Century Layout." These versions were slightly longer than the clinic I presented at the NER Regional Convention last month. This means that in the past 3 months I have presented this clinic 5 times, as well as two other clinics, at 4 different conventions.

I also attended some interesting clinics at the Chicagoland RPM.

Of great interest to me was George A. Bogatiuk's update on the Tsunami 2 decoders. I think he convinced me to standardized all my decoders on Tsunami 2. I already have them in my steam engines, but some of my diesels have LokSound decoders. I have no way to program those decoders as SPROGs and Decoder Pro can only do the basic functions. LokSound requires a special programmer that costs about $200. Instead I think I would apply that cost to a NCE DCC system with a Proto throttle for my HO layout. I wouldn't change my steam layout, as that uses EasyDCC.   The Proto Throttle doesn't work with EasyDCC- yet.

One of the lessons I took away from George's talk was the proper use of independent brake and automatic brake, though  I think the latter would be better called "train air brakes." With proper programming, you can use the Tsunami2's to accurately portray train brake operation. Combine that with a Proto Throttle and you have a realistic and fun simulation of diesel locomotive operation, though I am not sure how the Proto Throttle handles independent versus air brakes.

My Aquia Line Easy DCC and Stanton throttles already do a pretty good job of steam engine simulation, so most of this new info would apply to PoLA. Of course, if I get rid of PoLA, then this is moot.

I went to other clinics too. Steve Hile presented an interesting talk on the Decorah Branch in Iowa. Those granger branches do have a charm of their own. They seem exotic to an east coaster like myself. Keith Kohlman discussed the operations and presented a bunch of neat photos of the Erie Bucyrus plant in Milwaukee.  It is a very modelgenic facility and he is doing some nice work in modeling loads from the plant in N Scale. Kristen Dummler discussed the history and modeling challenges of  early live poultry shipping cars. She is building an assortment of models in HO scale. These could be a possible kit for Alkem Scale Models as they might benefit from some etched parts.

Of course the camaraderie at the meet and over meals was great too. I had lunch with Hal Miller and Cody Grivo, and went to dinner with some of my friends,  Jack Ozanich, Craig Wilson, Alan Bell, from the Michigan area. Along with Bill Neale, we decided to try to set up a ops weekend in the Washington DC area in Spring.

I also met a lot of new people. It was the first time I met Pierre Oliver of Yarmouth Models and saw some of the fantastic work he is doing. It was very impressive. He told me of his plans to build a SP branch line railroad based on a location in California. Got to love those branch line layouts.

I also met Jeremy and Kristen Dummler for the first time even though we have emailed each other in the past. They are a husband wife team that do modeling railroading together. That is so cool.

This was also my first time meeting Keith Kohlman, Paul Strubeck, and Cameron Tester, even though we have corresponded in the past.

Shout out to Mike Skibbe, Matt Gaudynski, and crew for doing a great job organizing and running the meet.

Alas, I didn't get to visit any layouts or hobby shops. Next time, I'll have to allocate more days to the meet.

I returned home on Saturday, doing the drive in one day in 11 hours and 59 minutes.