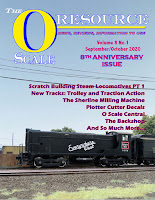 The current issue of O Scale Resource magazine contains an article which will be the first of a series on scratch building locomotives in O Scale. Glenn Guerra is starting the builds as he will be making two 4-4-0 locomotives.  The series begins with a discussion "where to start." It's an interesting discussion to me as I am in about the same place he is. This paragraph from the article was especially germane,

"I say this a lot and, I will  repeat it here, draw your model in the scale you will build it. This is especially important in the computer age where many of us do computer drawings. It is tempting to draw what is on the railroad drawing and just scale your drawing. So let 's look at what happens when you do this. Suppose there is 1/4" clearance between some of the valve gear parts and you draw it up that way.  When you scale your drawing to O Scale, you now have around .005" clearance. How good are your machining skills? Can you actually make that stuff? Suppose your prototype has a dimension of 4-3 /4" somewhere on it. If you divide 4.75 by 48 (our scale) you get .0989". Great, where are you going to get material that thick? On my models, the frames ,are 4" thick. That's .083" in O Scale. You can't get sheet brass in that thickness , but you can get .080" thickness, so that is what I used. The other problem is all the parts of your model are related. Now that I changed the frame thickness , how does that effect other parts of the model? I decided the outside dimension of the frame, from side to side, was what I felt was important, so I made that to the drawing. That decision now affects dimensions of the cylinders, firing deck, pilot beam and valve hangers. As you draw the model, you will be thinking of how things are going to fit together and how you will make then. I would recommend that you get the mechanism and boiler designed to fit before you start building. The rest of the parts are not critical to your model running."

I think he is right on the target with this statement. This is fact of life when building any model. Rarely can we build a model with every dimension true to scale. This applies to structures, rolling stock and even track. The key in a locomotive is that all parts have to interact and function, and not just look nice. 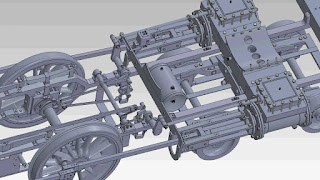 In the case of a locomotive with equalized suspension, the scale factor is even more out of whack. We (well, most of us) can't build perfectly scaled down versions of 1860's 4-4-0 locomotives with true scale suspensions, as shown in the image at the left. If you want a equalized suspension on your model, there will be components on the model that just don't exists on the prototype, not to mention that our locomotives use electric motors instead of steam.  Other prototype parts will be too small to make. It's a fine line to walk, but that's part of the challenge, isn't it.