Back Door to the City of Charlemagne - Battle for Aachen 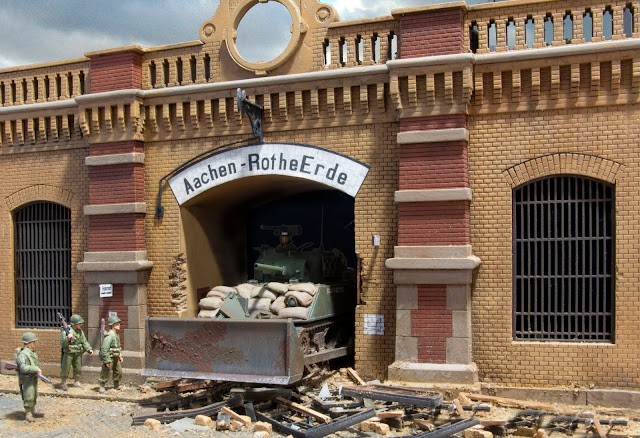 We are planning on visiting family in Florida next week. My brother convinced me to bring some of my models to display at the JAXCON, the 2021 IPMS meet for northeastern Florida. I was working on a diorama of a scene in WW2, so I decided to finish it to display at the meet.

This diorama is based on a series of 3 photos that shows US tanks from the 745th Independent Tank Battalion and soldiers from E Company, 2 Bn -26th Infantry Regiment, of the 1st Infantry Division (The Big Red One)  at the Rothe Erde train station. Rothe Erde is an industrial suburb east of Aachen.

The following excerpt from CSI Battlebook 13-C, The Battle of Aachen, Ft Leavenworth, KS describes the scene in the diorama.

The 2nd Battalion was finally ready to enter the city proper. The railroad tracks marked the southern limits of the city and would be considered the line of departure (LD). The LD embankment was about 30 feet high on the west side of the Battalion sector and sloped to about 15 feet on the east side.

The banks were fairly steep and would impose an obstacle to vehicles. There was one underpass in the Battalion zone, but this was blocked (note a down bridge and other obstacles). The plan called for the 2nd Battalion to drive to the north and the 3rd Battalion to attack west with the two meeting on the north-east border of the city. The 2nd Battalion had all three rifle companies on line; "F", 'E", "G", in order, east to west. 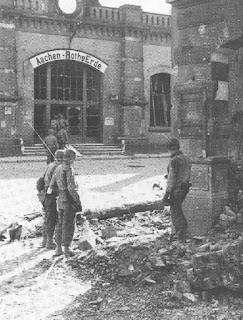 "The problem at that time was how to get the tanks, tank destroyers, and AT guns over the obstacle before the Germans could react. The tank platoon leader made a recon and finally found a place where several tanks could be taken  over. The rest would have to wait until the underpass had been cleared. In the "Capture of Aachen", LTC Daniel relates the detailed planning for the attack. "use heavy air and artillery in early morning. Air will bomb anywhere in city except within 500 yards of the railroad tracks in 2nd Battalion zone. Artillery will stand on line 100 yards from the railroad tracks with light guns. Mediums and heavies will cover from 300-500 yards from the tracks. 2nd Battalion mortars will work the area from the tracks to the artillery line 100 yards beyond. Jump-off time was 0930, 13 October. All artillery would lift 200 yards and air will stop except for targets marked by colored smoke. Main problem was to get infantry across exposed railroad embankment. Each  infantryman was given a hand grenade to throw over the embankment at 0930".

The main attack kicked off and E and F Companies scrambled over the embankment firing every weapon they had. The Germans were completely caught by surprise. They had expected the main attack to come from the south and not the east. Thus, the Americans advanced several blocks before encountering any resistance. As soon as the Germans got partially reorganized, they put up a fierce resistance and fought for every rubble heap. 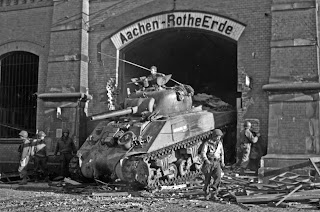 Every position had to be stormed by the Americans using grenades, bayonets, rifle butts, and flame throwers. F Company had been instructed to stay clear of the built-up area and head north until they reached their zone and then turn west. E Company was to clear all the buildings east of Adalbertsteinweg and north of the tracks. F Company found quite a built-up area in their zone northeast of the cemetery, and was slowed down considerably. By mid-afternoon, E and F companies still had not reached the line that was to allow G Company to be committed. An underpass was created by blowing out part of the walls of the station just to the west of the original underpass. Tanks were then driven through and by nightfall, 13 October, all the fighting vehicles were into the city. G company was also moved from its position along the embankment, so that all units were now in the city and ready for another push on 14 October. It had been determined by this time that daylight operations were absolutely necessary in street fighting to take full advantage of firepower and avoid loss of command and control. 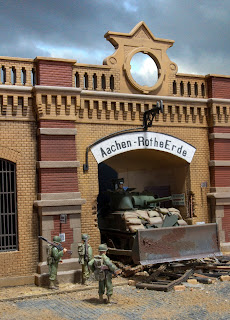 The model is in 1/56th scale, which is also called 28mm scale. The tank and figures are by Rubicon, who make some of the nicest models in this scale. Note, this is mostly a wargaming scale, so many of the models have coarse, over-scale features to survive rough handling in miniature games. But Rubicon figures and models are very finely made.

I scratch built the station with laser cut parts using photos and measurements of the actual station. I was fortunate that Joseph Franke is currently a graduate student in Aachen and he kindly measured the existing station and got dirt samples for me. The station underwent extensive renovation several times after the war  and many of the  details are now different compared to WW2. So I had to rely on the 3 prototype photos for many of the details. 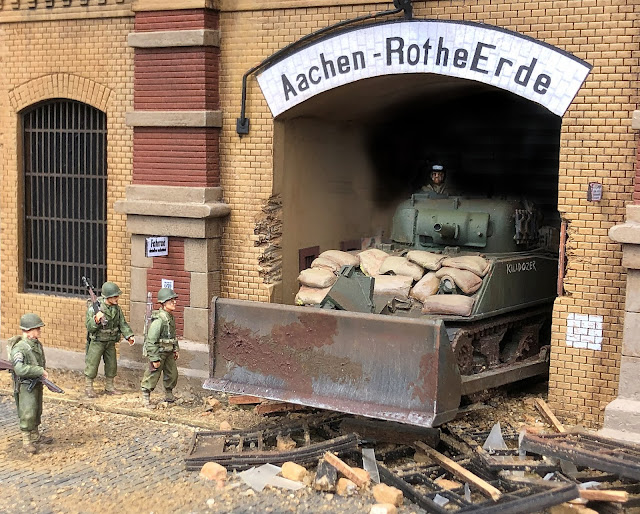