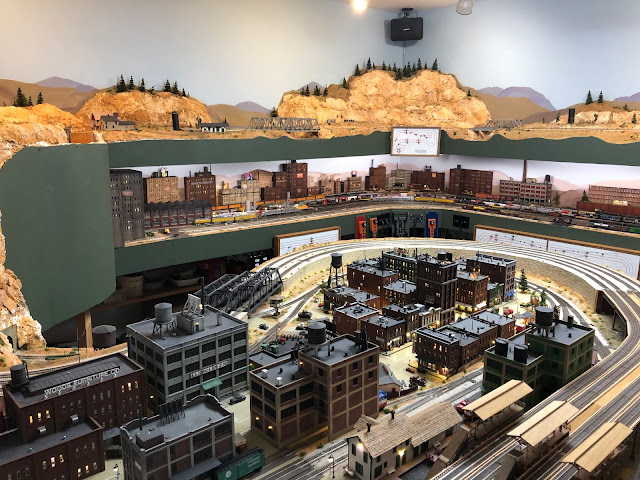 Wrapping up my documentation of our trip to Florida, I will mention our visit to Rick Bellanger's N Scale layout and the Titusville Model Railroad Club.

Rick is originally from Florida but lived in LA for many years. He was a member of the Belmont Shores N Scale and the Tehachapi HO scale model railroad clubs.

His current freelanced layout features the UP and Sante Fe railroads.  It is well built and features many illuminated buildings.  Rick said he is interested in selling his N scale layout and equipment, preferably in one transaction. If you are interested, let me know and I can put you in contact with him.  He has a lot of rolling stock and many structures.

After visiting Rick's layout, we stopped by the Titusville Model Railroad Club layout. We got to met some of the members and had a chance to look at their layouts. They have three layouts, the O gauge 3-rail and N scale layouts are finished. They are in the process of rebuilding the HO scale layout. It is coming along nicely. Alas, I forgot to take pictures at the club.

The guys at the model railroad  club suggested we check out American Aero Services, New Smyrna Beach, FL. So we did that the next day after a round of golf at nearby Venetian Bay (note, I was the caddy, my back was still not healed enough for golf).

American Aero Services is a restoration and maintenance facility that specializes in serving the War-Bird community. They restore aircraft, military vehicles, armor, missiles and rockets. They do complete restorations, repairs, maintenance and annual inspections. They also have a museum. Amazingly, they let visitors wander around their two hangers to see what they are doing. 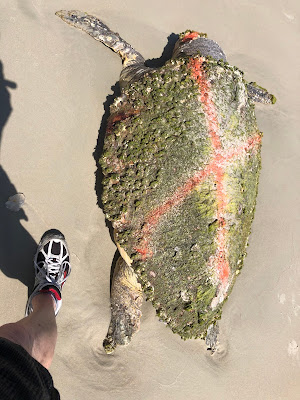 On my last day in Florida I took a long walk on the beach and saw a large, dead  turtle washed up on the sand. This is the second time I have seem a large turtle dead on the beach. The first one was larger than this one, but was in an advanced state of decay. This time the turtle appeared in fairly good condition, so it was not dead for long. However, it appeared to have three wounds on the left side that were probably strikes from a propeller. One of the wounds was pretty deep and looked like it was oozing. It may have been a fatal blow. The state of Florida tracks these turtles, so I reported it to the local lifeguard and he called it in. I am not sure how the orange markings got on the turtle.

That  wraps up our trip to Florida. It was a fun week despite the issues with my back and the unfortunate turtle.

We are back in Virginia. My back is getting better and more projects are getting added to the do list.