We are back from Florida visiting our family. We had a fun and productive trip. My back precluded my playing golf, so I was the caddy. Walks on the beach and stretching did help and I am feeling better.

The first model related event was Jaxcon 2021. That IPMS meet was held in a very large auditorium of a local church. Everyone was really friendly and happy to discuss their models.  About 250 very nice models in several categories were on display. That was about half the normal number.  After lunch, the organizers went about judging the models for medals and best of categories. They awarded bronze, silver and gold.  This meet does judging a little different from others in that they assess models against a standard, but what the standard was I do not know.  Later I learned  that they assessed that any model built out of the box, i.e. stock, could not qualify for a gold.
I had two models on display, the 1/32 Land Merrimack and the 1/56th Battle for Aachen. The Land Merrimack got a gold and the Battle for Aachen got a silver. I suspected that would be the case as many IPMS modelers are accustomed to super-detailed, larger scale models and smaller scale models have to be really outstanding to attract attention.  The fact that the Land Merrimack is totally scratch built, and has working brakes and an operable cannon also attracts attention.
My brother had several models on display and he received a gold, 4 silvers and a bronze. Given that he took up modeling about 18 months ago that is quite an achievement. In general I am not that enamored with model contests. So I liked the idea of awarding medals according to a standard. But there were some extremely well built models that did not receive medals. From what I could tell, if a model was not weathered, it did not receive an award, no matter how finely built except for model show cars, like hot rods.

Speaking of hot rods, there was one model hot rod that had the most impressive paint job I have ever seen on a model car. The builder was a retired auto body painter and he did an amazing job. He received a gold medal and best car model award.
There were a few of the large scale armor models on display. These models out of the box are so well detailed it is amazing.  The photo below shows a 1/35 and a 1/16 scale Abrams tank adjacent to each other.
More about our Florida adventures in a later posts. 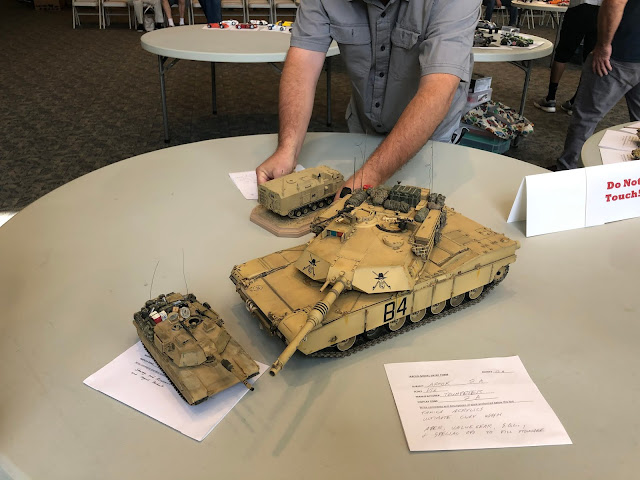