The Next Layout? Stay a While and Listen 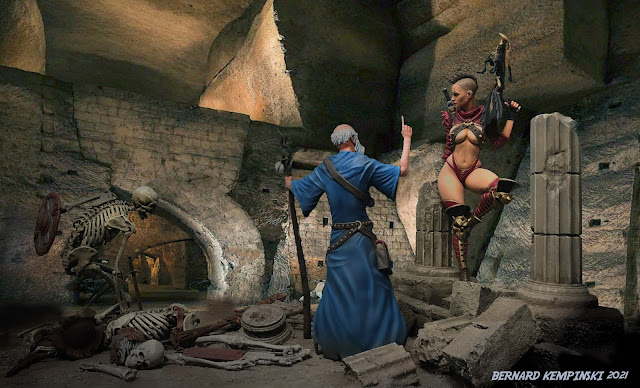 The LDSIG will be hosting a panel discussion on 27 February called, “What Would You Do Differently?” They asked me to be a participant. This got me thinking. Readers of this blog will know that my layout has undergone, and is still undergoing, major changes. So not only would I do a lot of things differently, some of them I already did.   But, this is a good opportunity to think about all the  changes and codify them.

Thinking about layout designs of course causes my thoughts to turn to the next layout.  What would it be? As I thought about some possibilities, I realized that I probably wouldn't like any of them more than what I have now. So the Aquia Line will stay, for now.

I consider myself a model builder. What can I build if not a new layout?  Well, lots of things. I can make a smaller portable layout or module. Then there is my model kit stash. Even though I like to scratch build I seem to have a large stash of model kits waiting to be built. These range from figures, ships, armor, airplanes and even a hot air balloon. The latter is for the layout, but I'll probably not use it  and scratch build it instead. That kit is pretty poor.

As an example of non-layout projects, I recently built this large scale (1/10th) diorama of a scene inspired by the game Diablo 2.  I've talked about this game a few times on  the blog. My kids and I have been playing it on and off for over 15 years. The diorama utilizes .stl files that I down loaded as well as some traditional scratch building. In case you don't know,  the fantasy genre seems to dominate the hobby side of 3D printing. Star Wars, Lord of the Rings, comic books, and Dungeons and Dragons are very popular. Historical modeling takes a back seat, but the number of historical 3D models is growing quickly. Soon you'll be able to find whatever you want to 3D print. 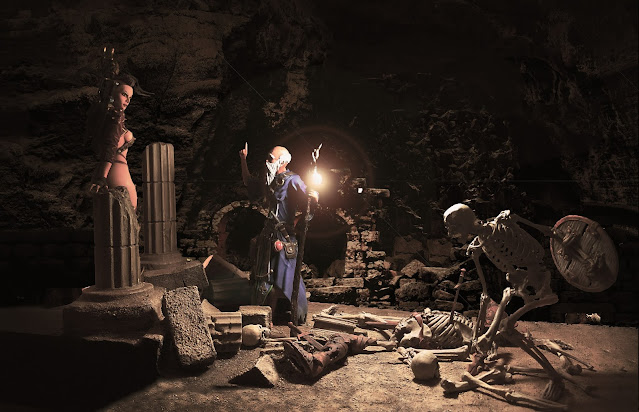 I tried using Photoshop to show the glowing light on the staff. Turning off the room lights, I held a small LED light held by the staff to illuminate the scene and create the shadows. Then I edited out my hand and replaced the background with a scene of a rock wall and ruin textures.
I am not a big fantasy fan. The only  books in that genre I ever read were Lord of the Rings and Hobbit. I never played Dungeons and Dragons. But I have played a lot of Diablo as well as some other computer games. So, when it came time to pick a subject, a diorama inspired by that game was obvious and a lot of fun.  The man in blue is Deckard Cain and the women is an Amazon fighter armed with crossbow and sword. They are characters from the game. 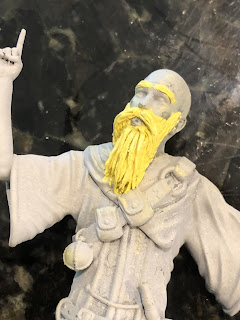 The diorama is large scale, so the painting techniques were somewhat different, I used acrylics, oils and ink washes. I ended up using my airbrush a lot, spraying the tiniest of patterns to apply the shading on the figures.  I really like Tamiya acrylic thinned with alcohol for this kind of work.  I used a .5mm tip with 15 psi in my Grex Tritium airbrush.
I did a bit of conversion of the figures. I changed the weapons on the Amazon and added a beard and hair to Deckard using Miliput.  I added a few other details like a weapon belt made with sheet pewter and a small scorpion.

I made the wooden base with two sections of poplar that I edged joined with dominoes. I need very little excuse to use my woodshop.

In a diorama or vignette on a layout, the figures are the primary way to tell the story. The large scale figures allow one to see expressions on the faces much clearer than smaller scales. Thus, the story telling is much easier and effective.

The diorama was a lot of fun. This model was a nice diversion from my usual historical modeling. There was no fretting over rivets and other minute concerns of the prototype modeler. Even Alicia got into it making suggestions. She wants me to add a snake to the scene. I also enjoyed playing with the photos of the diorama trying some new lighting effects that Photoshop added.

The Amazon actually was from a stl file  kit of a cyber-metal-biker gal. She had a assault rifle and two katana swords as well as a crazy motorcycle built partially with bones. I didn't use the motorcycle, but my brother did. He built it as a scene inspired by Mad Max movie.

Anyway, back to the layout benchwork. I did make runs to Home Depot and Mainline Hobbies last week to prep for the next step of putting up road bed and layout track. 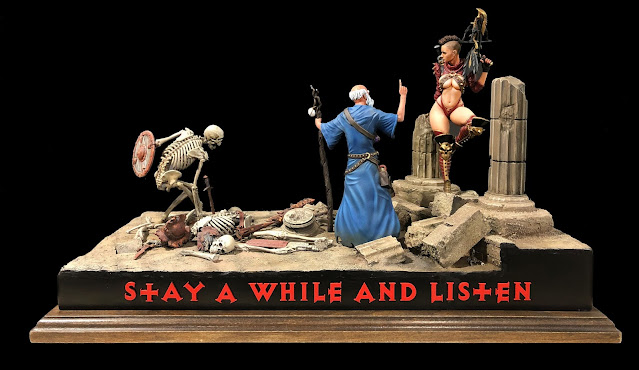 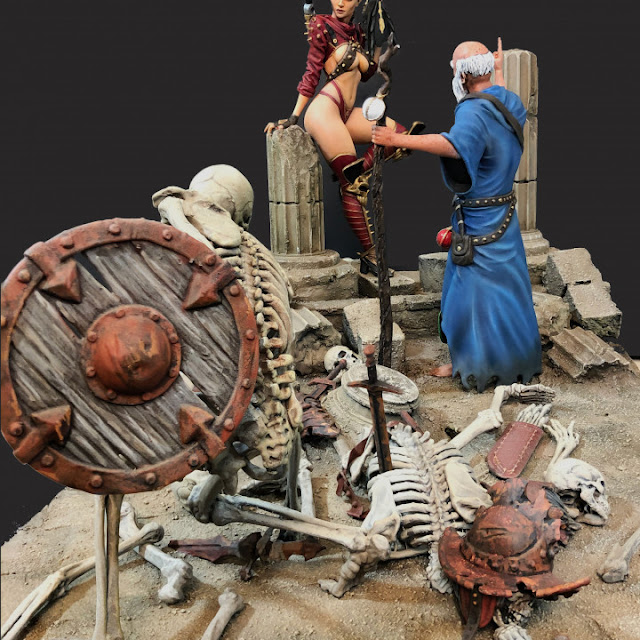 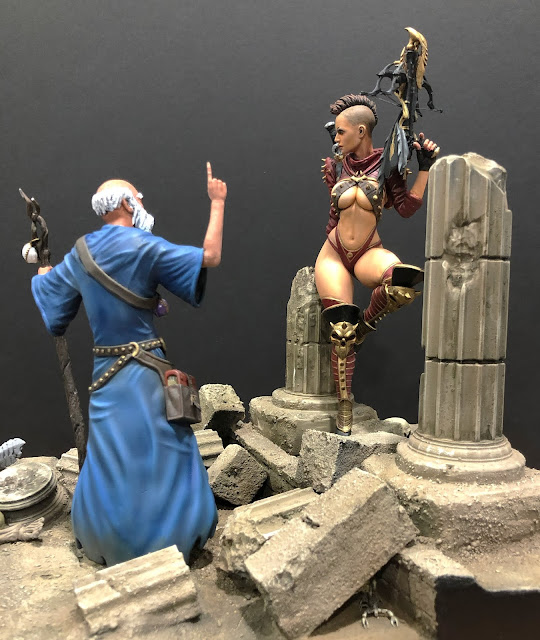 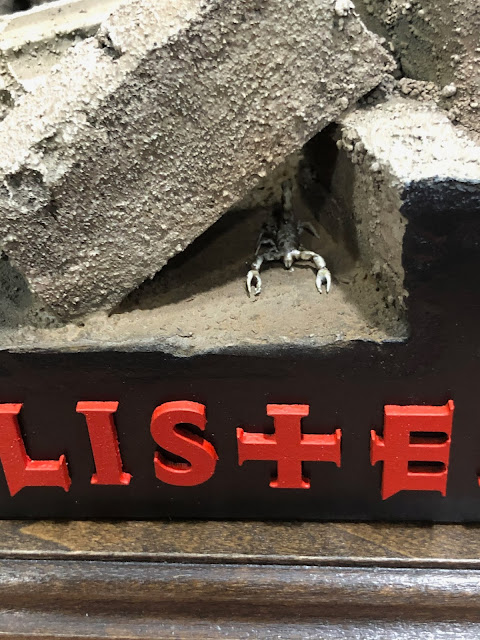 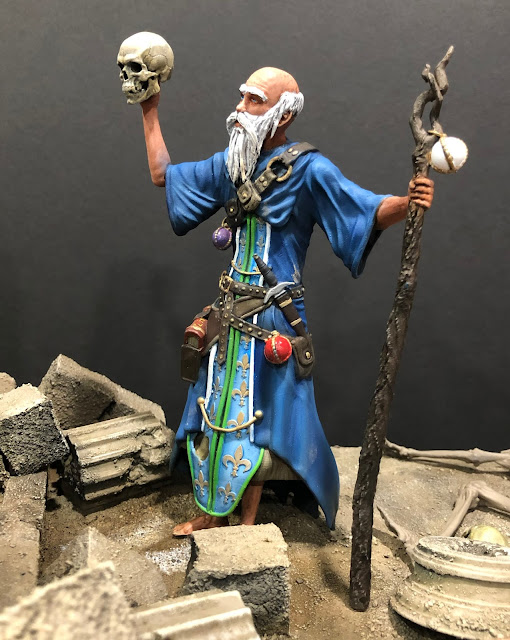 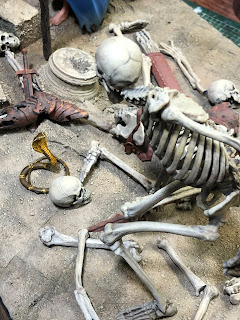 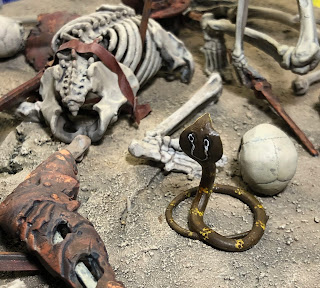 Email ThisBlogThis!Share to TwitterShare to FacebookShare to Pinterest
Labels: Dioramas