We have started extending the railroad mainline from Falmouth to Stoneman's Station. I decided 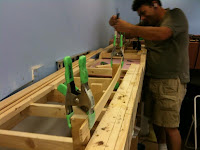 to try using spline roadbed for this part of the line in an attempt to save materials by avoiding cookie-cutting large sections of plywood. Here my brother is installing the first piece of pine spline roadbed.

We are using a combination of pine lath and composite wood. The pine lath is 1/4 inch thick and is not flexible enough to bend to a 30 inch radius without pre-soaking (actually I now learned that this is not true. It can curve that tightly without soaking). For the tightly curved parts we are using a composite wood material available at DIY stores. The material is a combination of wood and plastic with a fair amount of entrained air that makes it light. I don't know exactly what the plastic is, but it is something like expanded foam. In any case it behaves a lot like a flexible piece of wood. There doesn't appear to be grain, but it can split if you don't drill pilot holes for screws. Since it is pre-painted with a gloss paint, carpenters glue doesn't hold it as well as raw wood.

I decided to add a small trestle across a creek to the scene between Stoneman's and Falmouth, inspired by the scene at the left, actually on the USMRR City Point line. Note the rough construction of the bridge and the lack of fixed abutments. Since the Aquia line existed before the war, it is possible that stone abutments may have been used, as at Potomac Run. So I may use them instead. I'll make that decision later. This is not the big trestle over Potomac Creek that is coming later. Note the use of sills on the bottoms of the trestles instead of pilings driven into the ground. They also do not seem to use closely spaced bridge ties used in later bridge construction. Ties appear to be thin, certainly not the regular thickness normally used elsewhere on the railroad. 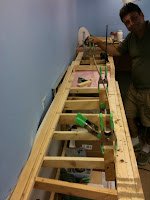 To drop the terrain, we cut away the main beams along the length of the bench work and added splice plates below. This creates about 5 inches of vertical distance from the rail top to the creek bed, enough to house a small trestle. The pink area just in front of Mark's arm will be the location of the trestle. 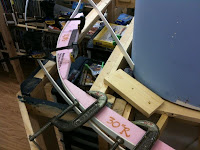 The advantage of splines is that they tend to assume natural easements as you install them. The trick is to ensure that you don't inadvertently create kinks or sections with too tight a radius. I made some 30 inch radius templates using 3/4 inch pink Styrofoam. These were easy to cut with a Stanely utility knife. When clamped to the white lath pieces they are doing a good job of holding the radius while we adjust the roadbed to the desired alignment.
Initially I thought a 36 inch radius would work here, but alas, that was going to cause the track to swing too wide into the aisle. So I am using 30 inch radius. 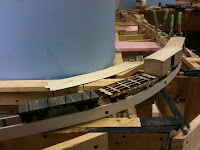 The photo shows some freight cars on the track to see how they will look. There will be an 1/8th inch thick Aspen Plywood section of roadbed on top of the splines and the ties will be glued to that. I am laser cutting the Aspen plywood to make bendable kerfed-roadbed pieces, but I'll discuss those in a future post as we install them.
I am worried about running passenger cars on these tight curves. I'll have to build some passenger cars so we can test it out. Although things look good on paper, when it actually comes time to build, the big radii that O scale requires is a real challenge in my tight space.