Work on the trestle at Clairborne's Run continued this weekend. The bridge is now essentially done, with just the scenery and water to be added. The photos show the construction techniques I used. 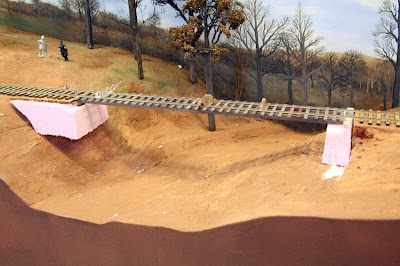 I made the abutments by cutting the basic shapes out of foam. I used my compound miter saw to get the angle for the battered walls. I spent a bit of time making sure the notches in the abutment for the stringers were properly sized to house the stringers.
To simulate the cut stone material of the abutments, I used embossed plasticard from a British supplier. This product is a dead ringer for the stone used by the RF&P. I used spray on contact cement and CAA to glue the sheet to the foam shapes. I took care to insure that the 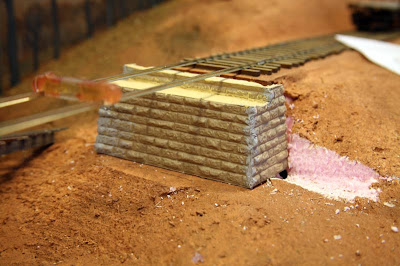 courses of stone lined up on all faces. Then I used Tamiya plastic putty to fill in the gaps and to help shape the cornerstones. Once that was dry, I filed the grout lines and stones to the desired shape.
I sprayed the abutments with flat black, then a shot of gray from above. I dry brushed with a light color and washed with dilted black a couple times to get the effect I wanted.
I carved the existing scenery to accept the abutments. This is where foam scenery excels. 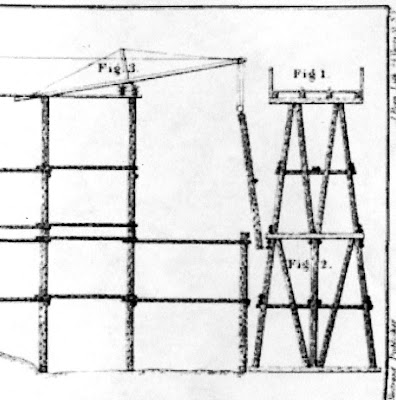 The drawing here shows the bridge under construction using a crane attached to the built portions of the bridge to lift the next bent in place. In his text, Haupt says that they would prefabricate the bents and lift them in place. They avoided using pilings if possible to save time. So the bents rest on sills.

He recommended using round "sticks," i.e. logs acquired locally. Since my railroad had a saw mill available, I used cut lumber for most of the bridge components, but I did use round sticks for the poles. I textured and tapered the pine dowels towards the top with a rasp .
Here I am placing the bents in position. I made the bents on the work bench using a jig that I laser cut. I also cut all the poles to a precise angles on the laser. I drilled all the joints and pinned them with 0.015 inch phosphor bronze wire. For military bridges Haupt specifies using dowels, but I found brass rod easier. 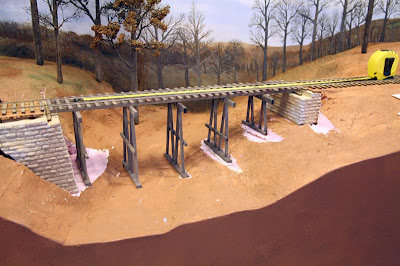 I carved some of the scenery away to accommodate the bents, this is appropriate for a bridge that used prefabricated bents. I later added small wooden retaining walls to hold the cut soil at the sill plate locations. They are not yet installed in these photos, but will be visible in the final shots. 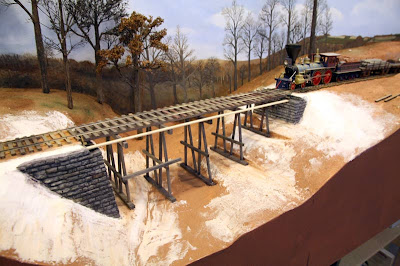 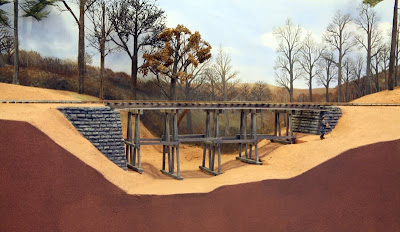 After removing the bridge parts, I used Fast and Final lightweight Spackle to fill in the gaps around the abutments and the bents. I think I should have used water putty as it is a bit stronger and sets faster.
I added a two plank walkway along one side of the bridge as I have seen this is several photos. Haupt suggests planking over the bridge to allow horses and wagons to cross. I didn't do that here, as I assume alternate crossing sites are available nearby. I added some splice plates to the stingers to represent the fact that the stringer is several beams and not a single long beam. These received nut bolt and washer (NBW) detail. I also added NBW to the lateral braces. The iron bolts add a nice contrast to the wood and stone components.

The scenery is nearly done. I still need to add the ground cover, vegetation and lastly, add the water. Then some sentries, tents and other details will complete the scene.

One curious thing to note, the fascia and ground surface are painted the same color, but they look quite different in the photo due to the overhead lighting. In the actual room the colors are quite similar.