The following is an edited compilation of textual inscriptions from historical markers in Stafford County, VA that partially describe the role the Aquia Line played in both the slave trade and escape to freedom, including some of the most famous cases of the era, Solomon Northrup and Henry "Box" Brown. For more information about the markers including a map showing where these markers can be found see this link and the Trail of Freedom website.
Aquia Landing was once a vital hub in Virginia's transportation network. As early as 1815, steamboats from Washington and Alexandria made regular trips here, transferring passengers, mail and slaves to coaches bound for points south. In 1842, the Richmond, Fredericksburg, and Potomac Railroad completed its line to Aquia, reducing travel time between Washington and Richmond. The junction here of steamboat and rail marked Aquia as an important place in antebellum Virginia and a major crossroads of the interstate slave trade.
By the 1850s, Virginia was exporting more slaves than any other state. Thousands of them, often handcuffed and packed amidst the cargo, passed through Aquia bound for slave markets farther south. From Aquia, most traveled onward. Some larger groups were forced to walk in chained gangs, or coffles, to destinations as far as 300 miles away. 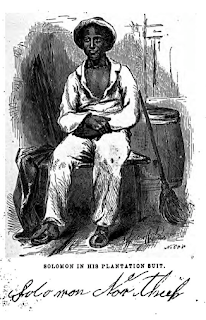 Solomon Northrup , was a famous African American free born in New York but kidnapped in Washington, DC in 1841 and forced into twelve years of slavery. His kidnappers took him through Aquia Landing on his way to servitude. He later sued and won his freedom and wrote a book about his amazing experiences, which is available free on-line.

"In the forenoon the steamer reached Aquia Creek. There the passengers took stages — Burch and his five slaves occupying one exclusively. ...He told me to hold up my head and look smart. That I might, perhaps, get a good master if I behaved myself. I made him no reply. Reaching the steamboat, we were quickly hustled into the hold, among barrels and boxes of freight...After sunrise...we were called up on deck to breakfast. Burch took our hand-cuffs off. ...Breakfast over, the hand-cuffs were restored."

The rail line to Aquia sometimes provided an opportunity for slaves seeking freedom. In 1848, slaves William and Ellen Craft of Georgia embarked on their dangerous journey to escape. Ellen, born of a slave mother and a white father, disguised herself as a white man seeking medical treatment in the North. William assumed the role of her body servant. They traveled by train, carriage, and steamship from Georgia to Philadelphia, passing unchallenged through Aquia Landing. They reached Philadelphia — and freedom — on Christmas day 1848.

Three months later, Henry "Box" Brown became one of the most famous escapees in American history. A slave in Richmond, Brown packed himself in a wooden box to be mailed to freedom. By wagon, train, and steamboat, Brown traveled north, sometimes upside down. After 27 hours and undetected passage through Aquia Landing, the Express Mail box carrying Henry Box Brown was delivered in Philadelphia, its occupant a slave no more. 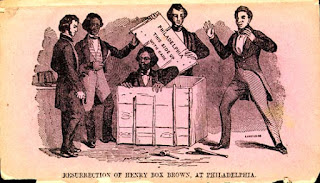 "The joy of the friends was very great; when they heard that I was alive they soon managed to break open the box, and then came my resurrection from the grave of slavery. I rose a freeman...." —Henry Box Brown, Mar. 30, 1849

During the Civil War many slaves throughout the Aquia region rejoiced at the opportunity for freedom. Thousands left their houses, farms, and plantation, heading north toward the Union army.

Some "contrabands" (as the army called them), took jobs with the Union army, often as paid servants to officers. They earned between 25 and 40 cents per day, plus a ration. But for most former slaves, their journey to freedom continued north. Soldiers shepherded them onto steamboats at Aquia Landing for the short journey up the Potomac to Washington, D.C.

When the Union army evacuated the area in September 1862, a final burst of freedom-seekers flooded Aquia Landing. Among them was Fredericksburg slave John Washington, who slipped aboard the Washington-bound steamer Keyport. That spring and summer, as many as 10,000 slaves made the journey into Union lines—to freedom.

I bounded across the gang plank and concealed myself for a while until the steamer got off from the wharf. I then came out and arrived Safe at 6th Street Wharf in Washington D.C. on the night of September 1st, 1862 in a hard rain."

A final observation by W.W. Wright, Superintendent, USMRR, about the escaping slaves passing through Aquia Landing.

"It may be proper to state here that when we evacuated Fredericksburg, by direction of the Maj. Gen., we brought away a number of white families with such of their goods as could be readily moved and furnished to the Adams Express Co. cars to load all their goods.  During the last two days the contrabands fairly swarmed about the Fredericksburg and Falmouth Stations, and there was a continuous black line of men, women and children moving north along the road, carrying all their worldly goods on their heads.  Every train running to Aquia was crowded with them.  They all seemed to have perfect confidence that if they could only get within our lines they would be taken care of somehow.  I think it is safe to estimate the number of contrabands that have passed by this route since we took possession of the road at Ten Thousand."

Escaping slaves are an important part of the USMRR Aquia Line. I plan to have scenes showing former slaves both on construction crews and as refugees fleeing toward freedom. This quote also verifies the fact that the Adams Express Company operated on the USMRR Aquia Line.