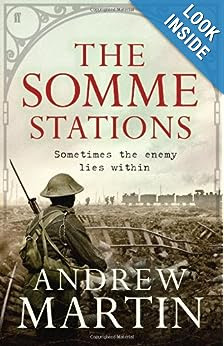 Chuck Macklin recommended the book "Somme Stations" by Andrew Martin. I just finished reading it and found it to be the perfect novel to read while building a model railroad with a WWI trench theme.

The railroading details and life-in-the-military aspects were very interesting and get five stars. The author did a good job of capturing the fear that these men must have felt. The narrow gauge part of the story was great, loaded with realistic grit. His use of a rail fan character was a clever way to load in the railway details for the rail fan readers. The Spurn Head Railway described in the middle of the book would be a great prototype for a small exhibition style layout. Here is a link to more info the Spurn Head.

There were a few rough bits. I would have expected men from a railway outfit that get assigned the task of trench digging to at least garner some complaints, but his characters accept it in silence.

The murder mystery initially was good, but it turns out to be overly complex requiring about 10 pages of exposition with lots of new information to tie it all together. For that it has to lose a star.

Overall I enjoyed it and would highly recommend it for the character development and military railway scenes. It was the perfect book to accompany the WWI Project layout. 4 of 5 stars.