I have started work on a 1/32nd scale model of the United States. This was a unique passenger car built in Alexandria, Virginia to serve as the Presidential car. The car took about 18 months to build and was complete in 1865.  President Lincoln never rode in the car when he was alive. However, it was was used to transport the bodies of  he and his son for their final interment in Illinois. The story of the funeral is well documented in various locations such as here and here.

This model will go on display in th B&O Museum as part of their last year of the "War Came by Train" series. 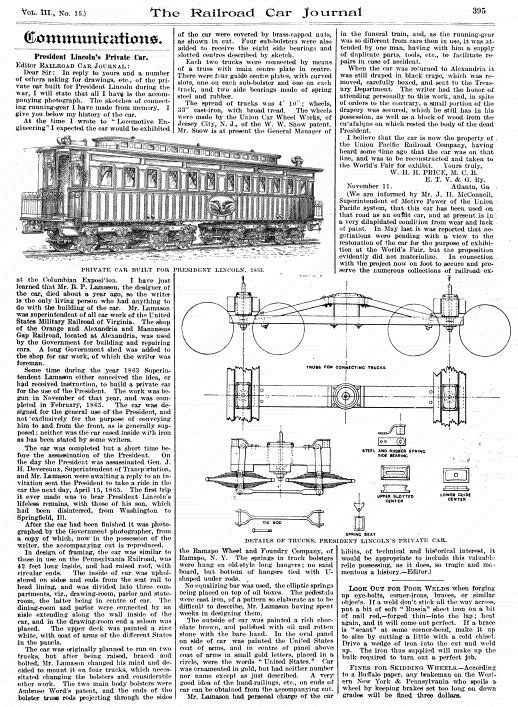 The car no longer exists, and no official plans for the car survived. The best period description of the car construction was in Railroad Car Journal (Volume III, December 1893, Page 395) by W.H. Price.  This source provides a sketch of the unique double truck arrangement used by the car. However, the drawing cannot be correct in all details as the angled truss element as shown would interfere with the interior brake beams of the trucks. The drawing also is not to scale as the overall wheelbase in the diagram is much greater than shown in photos.

Model Railroader published a set of plans for the car about a dozen years ago. The plans were largely based on research by Dr. Wayne Wesolowski. Wayne is a well known to model railroaders and others as a custom model builder. He has built 3 copies of the United States, and several copies of the engine Nashville in 1/12th scale. They are on display at museums across the United States.

I got to know Wayne about 12 years ago when we jointly participated in an exhibit of civil war railroad models at the Lyceum, Alexandria's City History Museum. He has graciously been providing me with information and plans for the United States. Wayne has spent many years chasing down surviving pieces of the car. He also worked with historic railroad experts to develop plans for the construction details based on best practice at the time. Based on information he has provided, I am working on the 1/32nd scale model.

Using the Model Railroader plan as a base, I drew this plan in color. This plan will be used to develop the laser cut parts I intend to make.

I started construction with the trucks as I reasoned they would be the trickiest part of the project, but the decorative trim is also going to be very challenging. The trucks are a swing motion design. If you are not familiar with swing motion design, this page has a good description. There are elliptical springs both transverse for the swing arm and lateral inside the pedestal. The pedestals have a very intricate design. Even the journal cap has decorative flourish that appears to be a man on horseback, or perhaps a rearing lion.

The two trucks are connected via a truss beam to a central drum called a trundle. The trundle is the pivot point that connects to the usual bolster. Price's description mentions a Ward patent bolster. Drawings of that are available, but it will be largely hidden when the car is assembled.

The trucks have pins that connect to the car that ride in curved slots, similar to the way a pony truck rides under the firebox of more modern steam engines. Wayne's plans for the truss show a single wood beam with iron truss rods providing stiffness. 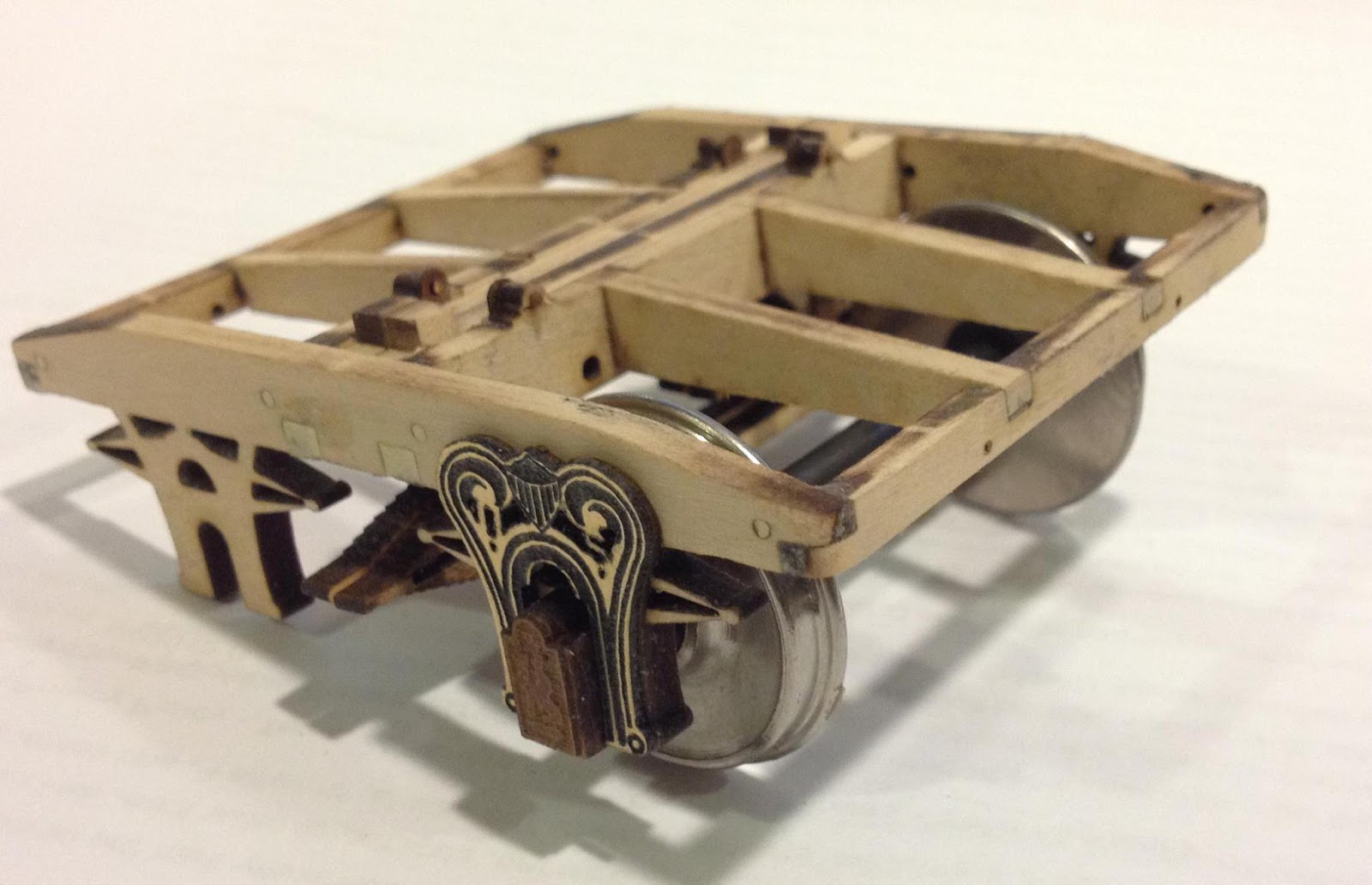 The image at the left is the second test model at designing the laser-cut bolster. The main frame is 1/8th basswood. Wayne's plans called for 3 inch members, but they looked too flimsy to me when I made the first test model. So I bumped up to 4" (1/8th inch basswood) for the main members.

To simplify construction I am incorporating some details integral to the laser cut assemblies. For example the transverse elliptical springs are integral to the bolster instead of making them as separate parts. The pillow blocks on the truck bolster beams are integral to the beam. Even with these compromises, the truck suspension will function almost as originally designed - a moot point as this is a static model.

I ordered additional wheel sets from NWSL. In the meantime, I am using the one wheel set I have on hand to test fit, etc. Note the actual car had compromise wheels to allow running on different gauge track. Thus I ordered the 236 wide wheel treads from NWSL. The set shown here has 172 tread.

The pedestals are three layers. The bottom layer is integral to the truck side frame. This is the same design I use on my HO and O scale trucks. On this truck, the top layer is laser engravable plastic with a thin layer of gold over black. It is normally used to cut name plates and similar items for trophies etc. It can be very tricky to cut fine detail in it. You have to experiment with the laser settings to get the right power, speed and frequency without melting the parts. Even in 1/32 scale the engraving on the trucks is so fine that it almost disappears. The laser dot size is about 0.005 inches, so any detail smaller than that is hard to capture.

Next step is to add the brake details and all the truss rods and NBWs.