Implications of Keep Alive Circuits on Layout Design-Having Cake and Eating it.

I have been a big proponent of simplification in model railroading. My own home layout while a daunting project due to the scratch building involved, is a rather simple track design mostly because I wanted to avoid electrical complexity.  Technology is finally coming around to address some of these concerns and it has an effect on layout design.  Lets trace the history of frog power and electronics using my layouts as an example.

To me the absolute least pleasurable task in model railroading was connecting switch motors to turnouts to actuate the points and electrically power the frogs.  Because I use relatively small 4-4-0 engines, powered frogs were a must.  Clean track is also required to allow uninterrupted power pickup.

At Falmouth,  the first section I built on my O scale layout, I used home made mechanical devices to electrically power the frogs. To actuate the turnouts, I made scale sized switch stands. The separation of mechanical actuation and electrical power was a step in the right direction, but still required a lot of uncomfortable under table work. As a bi-focal wearer, this is problematic as the normal angles of view in this work are not where the close vision lenses lines of sight are.

Before wiring the next section of the layout I discovered Tam Valley Depot's Frog Juicers. I blogged about them earlier. They are an elegant solution that uses complex circuitry to make a very user friendly and easy to install way to power frogs. They worked perfectly right out of the box and I was able to quickly wire the remaining turnouts on my layout. The prices was also pretty reasonable, about $16-$17 per turnout. 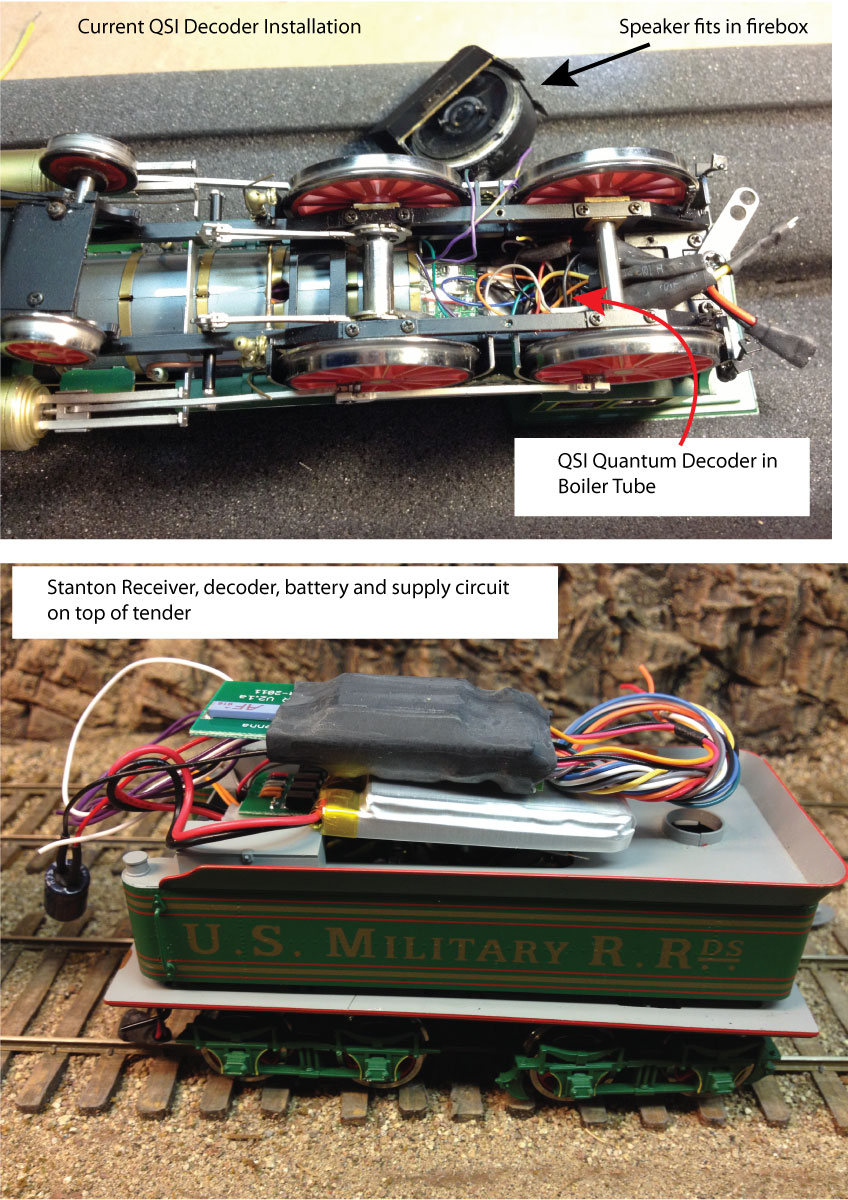 While these solved the frog power issue for my O Scale layout, I still had intermittent electrical pick up issues to deal with on the locos. The Stanton Battery Power system came along and addressed that problem.  The Stanton system is perfect for a simple layout like mine. The main problem was finding space in my locos to house the decoder, speaker, batter and battery power supply. I had so far successfully converted two of my locos and they have been giving good service now for about three years.

At this point, my O scale layout has a mix of DCC power via the rails and battery power, also recharged through the rails. As I finish the layout at Aquia Landing, I plan to continue to follow this approach.

I also planned to use that same approach on the HO layout I am building for my next book. To keep the HO project manageable I decided to go with a plan that included 10 turnouts with frog juicers and a fiddle yard to do staging. I mentioned this new layout with Paul Dolkos as I was seeking his advice on what HO scale track he recommended. He  suggested Micro-engineering track as it looks the best, and their turnouts have integral point mechanisms. He also shocked me when he said that he does not power his frogs. Now, I have operated his layout many times and it runs nearly flawlessly.  I had no idea. All my previous experience in N and O scale indicated that powered frogs were a prerequisite.

How can this be? He usually runs single or multiple diesels with all wheel pick up. Since he keeps his rail and wheels clean, the engines can usually bridge the dead frogs. As our discussion continued, Paul brought up the fact that DCC engines now have keep alive circuits that can bridge short sections of dead or dirty track. I had heard about these, but had not previously thought about them much. A light bulb went off.

I realized that if a layout can built without worry about powered frog and mechanical switch actuation, my two least favorite activities in model railroading were eliminated.  Then it occurred to me that the design of the layout can change too. Without all the electrical constraints, more complex track plans can be more easily attained both in terms of dollar cost and effort. Instead of powering every frog, one just needs to install keep alive circuits in each locomotive. The keep alive circuits cost about as much as a single frog juicer, so there is a trade off one needs to examine. If you have a big collection of engines, but not so much track, it may be less expensive to power the frogs.

In the case of my HO project layout, I will have a small number of engines, so adding the keep alive circuits will be less costly. Furthermore, installing the keep alive can be deferred until actual testing shows that it is needed. Remember Paul's layout runs fine without them.

Under this new approach, but still with the same philosophy of simplicity,  I redesigned the HO layout to have about 20 turnouts. Instead of a fiddle yard, where cars would have to be man handled during an op session, I added a visible staging yard. This opened up increased operational possibilities too.  Now the grain elevator could be a working switch job on the layout.

Without the need to purchase frog juicers, there was not much cost increase for the expanded plan. Using flex track and Micro-engineering turnouts, while not as simple as a building a Brio layout, will be much faster than hand laying track. This is looking like a win-win (except for Tam Valley, sorry Duncan).

Now the next step is to try installing some keep alive circuits on the engines. I would be happy to learn of my reader's experience in this regard. Have you done any of these? How tricky was it? I see that some DCC decoder manufacturers are building keep alive in their decoders. Can anyone share their experience with those?