We Have Met the Layout and It Is Ours 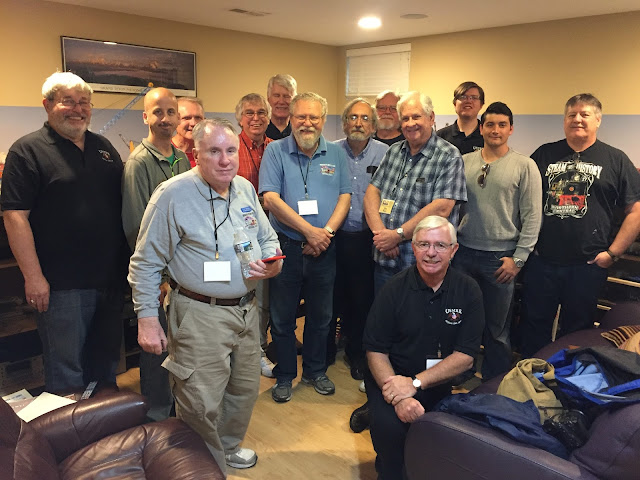 The AWCRRHS descended on the layout today to operate the Aquia Line. Nine operators showed up plus Joel Salmons, who was the assistant superintendent. We ran three trains at once. They included 7 and Extra 7 from Aquia Landing and Train 8 from Falmouth.

Train 8 actually was scheduled to depart first at 1:40 and it did. It was under the command of Thom Radice (NJ) as conductor, Mark Richardson (CA) as engineer, and Paul Dobbs (TX) as brakeman. Don Ball (KS) conducted Train 7 with Larry Huber (CA) as brakeman and David Bjorkman (NC) engineer. Extra 7 under the command of DC Cebula (DE), with John Salmons(VA) as brakeman and John Ott (CA) as engineer. Yes, the crews came from all over the Unted States.

This was the first time we ran an extra train. With 3 man crews, it got very crowded in the layout aisles. But, since we had visitors from so far away,  we wanted everyone to be doing something and have no one waiting around. Ideally we will use 2-man crews, especially if we run an extra.

Otherwise, the extra worked really well. It gave the conductors a bit more to think about as they ran the trains. When both extras were at Falmouth, the aisle got really crowded, but the crews made it work.

The loaded-empty tokens worked well. But, I think I will have the crews remove the tokens once they record the car to their switch list.

While the ops session was under way several observers stopped by. They included Drew Hyatt (PA), Ray Bracis (OH), Ron, Jon and Lori Flowers (MI). Angela Richardson, Mark's wife was here too. Later Doug Gurin stopped by to pick up his shirt.

Overall, the session was a success. Some brakeman had trouble with the links disappearing in the couplers. I think I will go back to the link design with the central bar. That prevents the links from going in too deep.

All the engines ran great. There were a few derailments, but nothing too serious.

Prior to the session, I modified the schedule to show Clozet Tunnel. (Yes that is the new name for the tunnel. Pronounce it Clow-zay. It a pun on the actual Crozet Tunnel and the closet).  That seemed to work well too.

There is a video of the session here. I think everyone had fun as they said they want to come back.


After the session, Joel Salmons went up to the car to get his sawzall. He and the rest of the gang were ready to tear out PoLA and expand the Aquia Line. Luckily, I caught them in time before any damage was done.