Based on the feed back from the operation sessions I have updated the timetable and schedule for the Aquia Line. 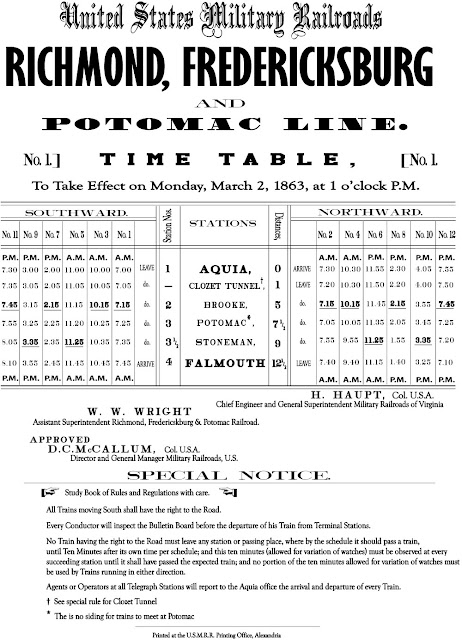 This revision creates two main periods of action - a morning session and an afternoon session. Both periods would run two scheduled trains in each direction in roughly 3 hours.  There is also a train in the evening if we want to do an ops session on a week night.  Chances are we will never run No.1 and 2. as I don't know too many model RRer's that want to operate that early.

Note that in the revised schedule meets take place in Brooke or Stoneman's. So the conductors have to be a bit more on their toes.  I also noted that on other timetables, scheduled meets are in bold and underlined. So I adopted that practice too.

The ACWRRHS session showed that running an extra train is a great addition, so I will plan to do that when I have enough operators.  However, I think we demonstrated that having 3-man crews is too crowded for the aisles. So I will stick to 2-man crews in the future.   That means a typical op session without an extra will need 4 crewmen. If 6 show up, then we run an extra.

Also, Thom Radice asked a question about what happens when a train is late for a meet. I found the answer on another USMRR time table for the Orange and Alexandria where trains had several scheduled meets.  Here is the what it said,

It's a bit hard to comprehend, but I think it means that a southbound train can leave a scheduled meet if the opposing train is at least ten minutes late. That process will repeat at each station until they meet the late train.

Also,  today I matted and framed a print of the locomotive Deveraux that was drawn by John Ott. He gave me a copy as a gift. As anyone who has visited my basement knows, the walls are pretty well full, so adding a print is a zero-sum game. I managed to find a place to for it in the stairwell. Thanks John. It's a beautiful drawing. If you want to get your own prints you can order them from John's site. 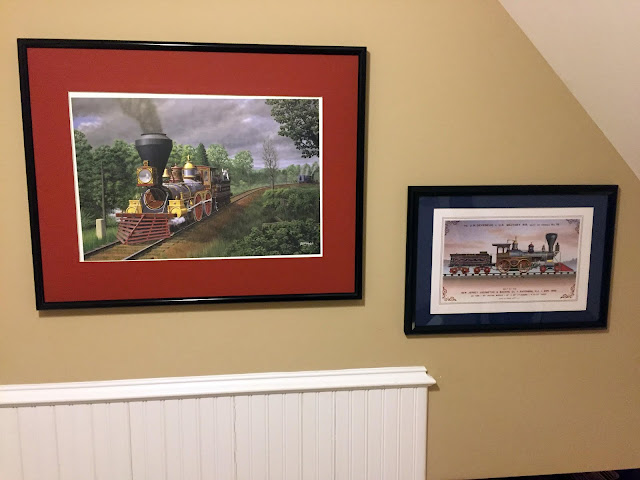