The Transfer Bridge at Aquia Landing 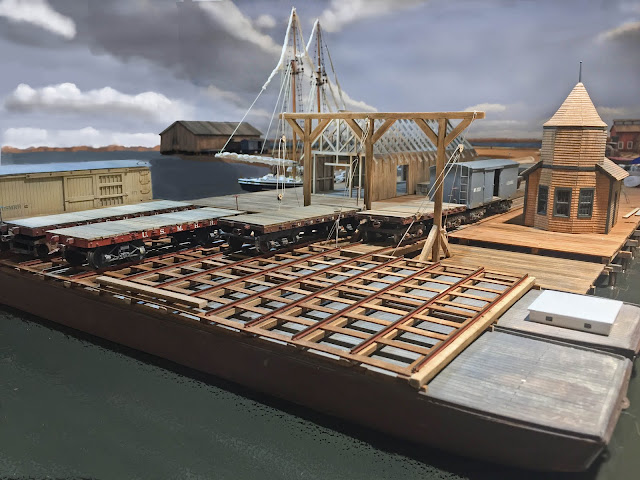 With no prototype photo of the actual transfer bridge to guide me, I made a two-track transfer bridge using the photos from similar facilities at Alexandria and City Point as a guide. There was also a transfer bridge at Manchester, VA at the end of the war, but that one was much different from the other two and was used to load cars to ships as cargo and not on rails.


Overall, I based my transfer bridge on the structure at Alexandria, but with 2 vice 3 tracks. But I used the block and tackles from the City Point transfer bridge instead of the lever arms of the Alexandria facility.

The model blocks and tackle are home made and they actually work, though the blocks will break if you tug the lines too hard. I broke three in the construction process.


The biggest difficulty with this project was the track spacing. I set it 2.63 inches to allow 8 cars on the float track.  But that made for a very tight clearance for the central post of the transfer bridge gallows. It took some careful work to provide clearance for the post and lifting ropes. In retrospect, I should have made the tracks about 2.75 or 2.8 inches apart.

I can shift the  barge to load each track. I am not sure I will do that in op session. But I can do it for photos.


A few more details on the barges and this project will be wrapped up.