We are back in Virginia after a Christmas trip to Rochester, Minnesota to visit relatives.  It was very cold there, but we had a good time and had a chance to do a little bit of rail-fanning.

I received a couple interesting books for Christmas as gifts. The first was "Grant," by Ron Chernow.  It is getting good reviews. The second is, "Clad in Iron - The American Civil War and the Challenge of British Naval Power," by Howard Fuller. A quick skim of the chapters definitely caught my interest. I will read that next after I finish George Swede's,  "The Steam Tug." So far that book has been a fascinating review of the history of the steam ships and tugs. 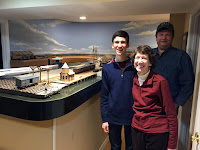 This evening we were visited by Nick Pautler and his parents from Delaware. They are all rail fans and are planning on building a new layout. Nick is an engineering college student so doesn't have much time for model trains now. But his dad is building a new house with lots of room for a new layout. They are interested in coming back for an op session, so we will add them to the call board.

While in Minnesota I tweaked the Aquia Line v18 design a bit. 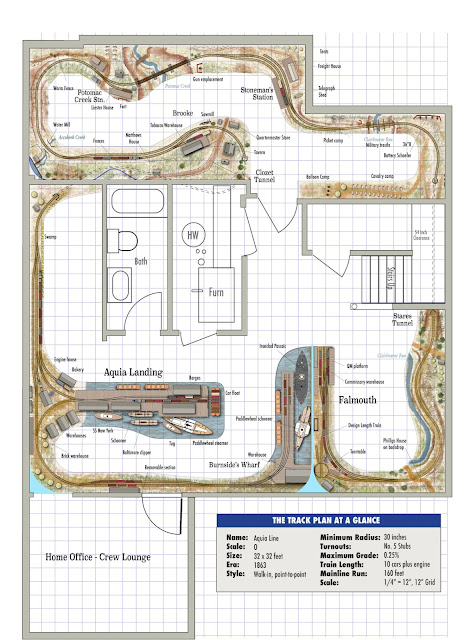 The main change to the plan was that I moved the turntable to the back of the Falmouth section, thereby making the benchwork in that area narrower. That will allow me to keep the couch in that part of the layout for use as a crew lounge and TV viewing area. The couch can slide under the Falmouth benchwork during an op session.

A by product of that change is that the continuous run (CR) is eliminated because there was no way to fit it behind the turntable in a convincing manner. As I have said in the past, a CR is not a priority for me, so it's no big loss. However, I am keeping the siding to the warehouse at Burnside wharf for the extra switching opportunities.

I haven't decided on whether to do a swing section or removable piece for access to my office. I am leaning to a swing section, while Alicia thinks a removable piece is better.   I did a bit of surveying tonight and may have to put a slight grade on the line to provide sufficient clearance under the stairs, but there is room for that, so it shouldn't be a problem.

The more I look at this plan the more I like it. However, there are few other ideas I want to explore, so this is not a final plan yet (it never is). I prefer to keep tracks out of the office because I want to build some nice book shelves in there and I like how the sky board came out in the far corner. But there some variants of v19  that I want to consider even  though they do invade the home office.