Oceania has always been at war with Eastasia 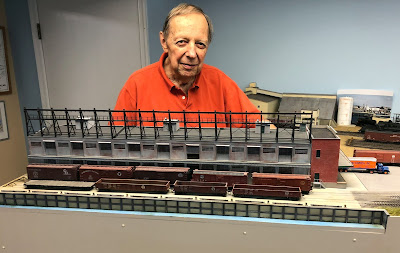 The past few days have  been super busy. It started with a visit to Paul Dolkos's layout. He wanted to confer on some ideas for his back drop. While I was there I got to admire the completed pier shed that I helped build. Paul added the cargo masts to the roof and completed the rest of the details. I had previously cut many of the structure parts on my laser for him. It's always a treat to visit Paul's layout.


Later that day my brother Rob,  his wife, Terry, and their daughter, Jennifer, arrived. They had a lot of fun running trains on the layout and doing some cos-play in my general's costume.

On Friday, Dr. Tak, one of Rob's friends from his days working with  the Japanese Space Agency, also visited. Tak really enjoyed the trains, though he is not a model railroader himself.

Jennifer and I also did a Facebook live video of her operating the Aquia Line. That was an interesting experience. We had about 100 people watching live by the end.

On Saturday the visits continued. Brad Trencamp brought his nephew Paxton, to see and operate the layout. Paxton got to run trains on the Aquia Line and PoLA.

Later, Bill and Andy Sparkmon and their friend Bob Jackson, from Baltimore, arrived to visit the layouts. Bill is an old friend from my C&O Modeling days. He used to live near Pratt, WV on the C&O mainline near Handley. Bill was an excellent source of prototype information on the C&O. It was great to reconnect with them. 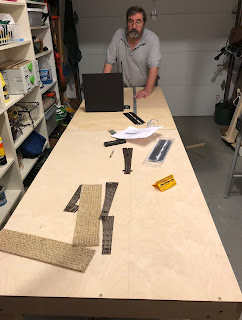 Finally, John Drye arrived to help me work on the modules. I had previously decided to shorten the length of  the modules by a foot each.  We joked, in true double speak way, that they were always going to be 4-feet. We have the plans to prove it.

So John helped me do the job. It was a easy to do using my track saw and associated track.  The new modules are two feet shorter overall, but will fit much better in the space available.  The  track plan will be simplified a bit, but still captures the essence of the scene.