A few days ago I came up with an idea for an expansion of the Aquia Line that relies on an alternate history. The idea involves extending my layout into the crew lounge by placing Fredericksburg on the far wall.  The main modeling motivation for this is to add another big bridge on the layout and a large town.

The USMRR Aquia Line did extend across the Rappahannock River through Fredericksburg and about 10 miles beyond from  May 1862 (when Haupt took over the line) until September 1862 . They used the RF&P workshop in Fredericksburg and also had a large bakery there. During this time the bulk of the Army of the Potomac (AoP) was on the Peninsula south east of Richmond, and General McDowell was operating just south of Fredericksburg with about 30,000 men. Unfortunately, the USMRR abandoned this area in early September 1862 (See this post), and never rail rails back to this area again during the war.

I could back date my railroad to May-June 1862.  But, that would require that I change seasons depicted on the layout from winter to spring-summer. Also, I would have to convert the bridge at Potomac Creek to the bean pole and cornstalk trestle.

So I thought about how else I could use the existing winter layout, but extend the line to Fredericksburg. In November 1862 when Haupt rebuilt the Aquia Line after the Battle of Antietam, he implored General Burnside, the commander of the AoP to cross the Rappahannock River and move south before Lee arrived. Instead, Burnside delayed his move until his pontoons were on site and Lee was able to fortify the heights behind Fredericksburg. That lead to the disaterous Battle of Fredericksburg, he was replaced by General Hooker, and the AoP went into winter quarters north of the river.

What if Burnside had crossed the river and moved a few miles south before winter hit? The bulk of the AoP would be in fortified positions south of the river, supplied by a depot at Fredericksburg. The stations north of the river would have smaller concentrations of soldiers, but they would still maintain stations on the railroad.  Falmouth would no longer be an important stop, but Fredericksburg, just across the river, would be a major hub. I would have longer sidings there able to support longer trains.


The water mill and other structures besides the bridge in Fredericksburg always appealed to me as a scene worth modeling (see photo at left).  In this layout design, the large churches and municipal buildings of the city would be behind the operators, and therefore not modeled. Other than the above mentioned mill, then town buildings that would be included on the layout would be smaller homes and stores. They would be a lot of fun to model.

The main attraction is the long bridge over the Rappahannock. It would be a trestle built over the stone piers of the original RF&P bridge that was destroyed by the Confederates. That would be a neat scene. The bridge and its depth would require me to move the TV to the opposite wall, not a big deal.

This looks like a neat design if you don't mind alternate history. 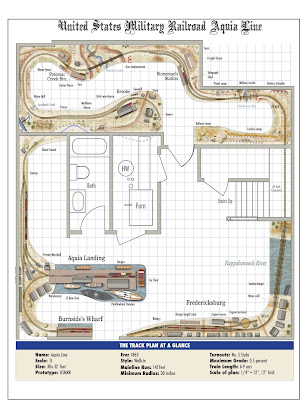