Thanks for Brian Kammerer and his friend, Frank A. O'Reilly, the Lead Historian at the Fredericksburg and Spotsylvania National Military Park, some of the mysteries of the second train were cleared up. Their consensus is that the train is a fanciful artist conception.   Here is what Frank says,

Sometimes, the art isn't about chronicling what is, but telling a story about what is going on.  In this case, the lithograph panorama in question is a retread on old promise.  The 1863 litho, with the legend, "View of Fredericksburg, Va. Nov. 1862)," really is a doctored 1856 lithograph of Fredericksburg.  I'm attaching a couple of detail-shots from the 1856 to compare.  Even the trains are in the same place with the same smoke.  The only difference is that the artist in 1863 cleared off all the ships on the city dock, wrecked the bridges over the river, added a couple of Confederate earthworks in the background, and a Union cannon in the lower right corner of the piece.  Truth is, the artists were lazy in 1863--they neglected to remove the bridge over the Rappahannock upstream at Falmouth.

Now, to your point that artists added to the scene to enhance it, there are a couple of features that appear in the 1856 and 1863 litho that weren't there in reality--one is the Mary Washington Monument on the outskirts of town.  The town intended to erect a monument but never got past building a base by the time of the Civil War.  Yet, it was in the lithograph because that was the city's signature significance/identity before Union and Confederate armies shot it all to hell!  The other is the crazy Falmouth bridge.  It remained on the 1863 litho because no one was looking for it--it never existed!  It was a bit of 1856 salesmanship, promising the city was modernizing and becoming well connected to the rest of the transportation networks in Virginia.  In precisely the same light, the artist "finished" the unfinished railroad, connecting Fredericksburg to the Virginia interior.  The right of way had been cleared by the time of the Civil War, but the company went bankrupt.  Several companies failed trying to resurrect it after the Civil War before the P, F and P ran a small gauge line out through Chancellorsville and Wilderness to beyond Parker's Store at the end of the nineteenth century.
So, the easy answer is yours: artists were taking license to tell their story--the story that Fredericksburg in 1856 was reinventing itself, modernizing, and harmonizing its past--the Mary Washington Monument--with the future--the railroads and river crossings, making it a transportation hub.  Only thing is: it did happen that way.


Frank also answered I question I had about the foundry that the USMRR used in town.


The authority, Noel G. Harrison,... suggested Hope (Scott's) Foundry, He documented the foundry in his book on Fredericksburg Civil War Sites (Lynchburg, Va.: H. E. Howard, Inc., 1995), Vol. 1, pp. 35-39.
"The Hope Foundry's Confederate war production was interrupted by the Federal occupation of Fredericksburg in the spring of 1862.  Union officers seized the enterprise, staffed it with soldiers and former slaves, and even laid a railroad spur along Princess Anne Street to convey their products--including at least one repaired locomotive--to the Richmond, Fredericksburg and Potomac Railroad." 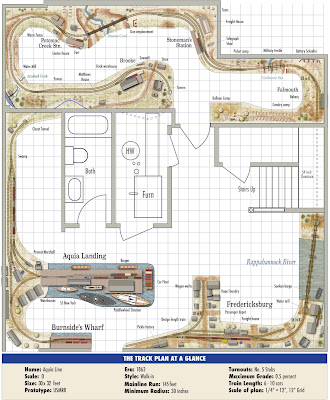 With this additional information, plus a citation that credits a union bakery at Falmouth, I made the following revisions to the plan for the Fredericksburg expansion. I had to adjust the streets a bit to fit my space, but it is starting to convey the feeling of a large town.

The turnout to the bakery in Falmouth would be on a curve, but at least it is a wider curve than I have there now.