I recently discovered this website that prints miniature figures on demand. They have an extensive set of ACW era figures.  They offer several scales.

I ordered several of the Speria figures including some limbers, wagons, and the coffee wagon set.  I never heard of the ACW coffee wagon before, so I looked it up. 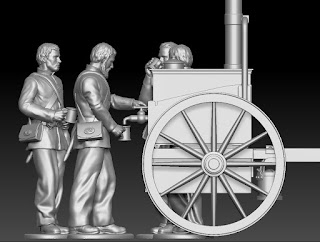 They were built by the U.S. Christian Commission to improve morale. From other research I know the the U.S.C.C. had several stations on the Aquia Line. The timeline might not be quite right as the coffee wagons were patented in March of 1863, which is the month I model.  But, I love coffee, so it's a must have.

The coffee wagon reminds me of how I first became a coffee drinker. Prior to being in the Army I never drank coffee. But, one cold and misty night I was at a bridge site on the Main River near Bamberg, Germany. We had just finished building a bridge and a steady flow of military vehicles were crossing the river over our bridge.  It was about 3AM and the mess sergeant showed up with a Cambro container full of hot, strong coffee. He made the coffee by dumping the grinds in the bottom of boiling water in the Cambro container. Then they would put the Cambro on the back of a jeep to deliver to the bridge site. Driving along in the back of a jeep, the water and grinds were agitated making strong coffee, especially near the bottom of the jug where it was like mud.  So, being cold and tired, I tried a cup of black coffee. Wow, it was great. So, I started drinking it more and more. Later, when I stayed at a German or Austrian gasthaus, or Italian hotels on ski trips, etc, I would drink their coffee, which was always strong. That is why to this day I love strong coffee.  But I do like a like creamer and a tiny amount of sweetness (like 1/8 teaspoon of sugar).

I think the coffee wagon and figures will make a nice mini-scene on the layout. 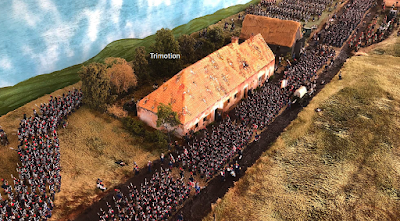 Brian Fletcher from the ACWRRHS also writes about his connection with the Speria Miniatures. He is involved with the Waterloo Uncovered diorama project group.  Waterloo Uncovered is a charity that supports wounded ex-soldiers come to terms with their conditions through the medium of archaeology.  Every year, the charity conducts a dig at Waterloo and, as well as uncovering new perspectives on the battle, the many soldiers who attend enjoy being part of the project.  In the first few years, the focus was at Hougoumont but recently work has expanded to other parts of the battlefield.

Speira have been generous enough to supply them with free figures for their non-profit organization to complete the Waterloo battlefield 1:1 in 1/72nd, scale.  He has their figures in 1/72nd. 28mm. and 1/48th.   He says all are excellent and reasonably priced.  Most extensive line is ACW.  They are a small company but highly recommended.  Any figure painters who want to join the Waterloo Uncovered project are welcome.  They have need for another 40,000 Napoleonic figures.  There will be over 100,000 all told.  Over 60 painters worldwide and growing. Diorama will be displayed at the National War Museum in England June 2021 if Covid permits. Some figures are free to a good home.