Perhaps that title should read "Mis-adventures." I have been proceeding with 3D printing of many of the parts for the Leach locomotive. As I print, I am learning what works and what doesn't. So I am revising the drawings and doing follow-on prints. Combine that with about a 50% success rate on my prints and the process has been slow. 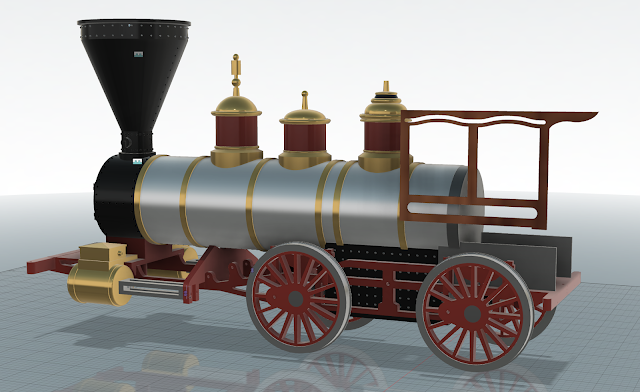 Here is the WiP state of the drawing as of today. I am learning Fusion360 as I go, so my progress has been slow.  I frequently have to go to the Fusion360 help site or watch a youtube tutorial on how to do things.

I made things both simpler and harder for myself by using imported elements from my original Adobe Illustrator 2D file. The Adobe Illustrator elements get imported into Fusion360 as .DXF format. This allows me to use the artwork, so that saves time. However,  this also causes some trouble since I haven't mastered Fusion360. For example, I have not figured out how to get the imported .DXFs to line up with the origin on my existing artwork. So the artwork is seemingly placed at random on my Fusion360 drawing space. Secondly, I have yet to learn how to get different sketches and 3D elements (called bodies) to line up automatically. This is trivial in Illustrator, but not so in Fusion360.

On really annoying thing is how the key combinations in Fusion360 are different than Adobe Illustaor and other 3D programs. I have accidentally moved my objects in Fusion360 when I was actually just trying to pan or orbit the view. This causes all kinds of grief as I then have to manually realign things. I tried using the joints command in Fusion360, but that seems to make things even more complicated. There seems to be no easy way to group items to keep them together. Sketches, bodies and components in Fusion360 all have different ways to align and group. It's very confusing.

Also, I have not yet figured out how the time line in Fusion360 works. When it does what I want, it is sweet. Like changing the diameter of a rivet and all the other like rivets automatically update. But other times, I will change the timeline and things disappear or go wonky.

Converting the Fusion360 drawings to 3D prints has also been a learning experience. It's fairly easy to export parts from the Fusion360 file to a format that the printer can take, which is .STL in my case. But getting that .STL file in a format the printer can handle requires additional steps.You have to use software to add supports and then slice it for the printer. There are several programs that do this. I have been using Preform, Chitubox, Meshmixer, and Photon Workshop.

Prefrom is Formlabs 3D print slicing software. I use it to get suggestions on how to support and slice an object as its automatic support logic is quite good. But it only exports to Formlabs printer formats. So I can't use it with the Anycubic Photon that I own.

Once Preform gives me some ideas, I use Chitubox to set up the supports. If the file has "errors" they can sometimes be fixed in Meshmixer. Meshmixer has a lot of power to do other things too, like modifying or  drawing your own objects, but I haven't explored it that much yet.

Once Chitubox is done, I have to run the file in Photon Workshop to save as a .PWS format as my printer requires that type of file.

I have experienced several failed prints usually stemming from inadequate supports. But I also had 2 leaking vats and other sundry problems.

Anyway, enough boring 3D print nerd stuff.  I have been able to print the smoke stack, cylinders, boiler and firebox sidewalls, and some of the dome.

I tried printing the frame on the Anycubic Photon, but it was too large for my printer volume and would not print reliably. So I sent that out to Shapeways to have them print in SLA plastic. I selected that material as it has a faster turnaround than doing it in metal. I want this first 3D printed frame to test the fit of all the parts. Once that frame arrives, I'll add the sub-chassis and see if I can get it running. Then I can add  the rest of the parts. At that point I'll evaluate if I can proceed with a 3D printed frame, or built by hand with brass stock, or have metal parts laser cut by an external service.

Some of you have commented on tolerances and shrinkage of the printed parts. Because of the compensated sub-chassis design I am using, all of the tolerances on the parts I have 3D printed so far are not critical. The key issues is making sure the distance between the axles  is precisely the same as the length of the holes in the main drive rod. Those parts will not be 3D printed.

I am pleased with the stack, smoke box and boiler print quality. The stack is a combination of 3D printing, a brass mesh for the cinder screen, a laser cut cinder screen support, and a section of flat brass for the screen latch.

The cylinders came out nice too, but I am not sure they are strong enough to use in the working model. I plan to have these 3D printed in Shapeways brass, which uses 3d prints to make a lost wax mold to make actually brass parts.

I am surprised at the strength of the boiler. It is quite sturdy. The 3D boiler had some print layering visible, but I was able to sand those away after a coat of filler primer. The next challenge is to try to paint it to look like Russia Iron.   I ordered some BareMetal foil to try out.
The 3D printed boiler may actually work better than the brass tube I was planning. The reason is that the brass tube is relatively heavy and will raise the center of mass of the locomotive up and to the front. By using a lighter material that is hollow, I can add weight lower and might be able to get better balance. I am hoping that will put more weight on the drive axles to increase tractive effort that the locomotive can provide.

I need to change the method of attaching the domes to the boiler. I used Fusion360 to match the boiler curvature on the bottom surface of the domes. But, the dome parts have to be supported on that curved face to get a clean print. That means I need to sand away the support residue which can make it hard to precisely match the curve. A through hole that is the diameter of the  dome with a matching internal support in the boiler might be better as I would not have to sand any visible surfaces.