A Tale of Two Weeks Part 2 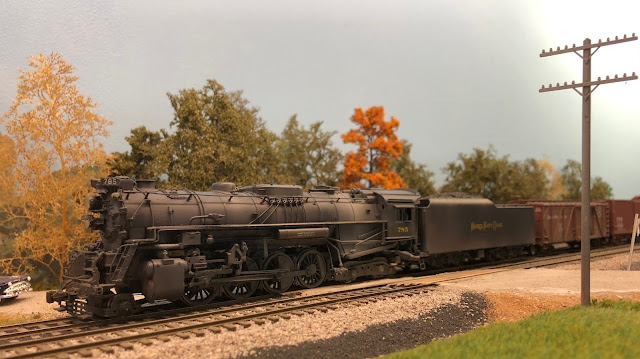 Last weekend members of the Virgina-Maryland (VM) Operators Group visited New Jersey for the 2021 North East Interchange.  The VM group are layout owners in the Washington Capital area that operate on each other's railroads in a round-robin fashion.  Around Thanksgiving of each year the VM group and a similar group from New Jersey get together to operate our layouts. The location alternates each year. This year we travelled north to New Jersey. Last year was cancelled due to COVID.  Next year the New Jersey folks will come south. According to Jerry Dziedzic our two groups have been doing this interchange since 2014.  I think I have attended all of them.

This year Paul Dolkos, Mat Thompson and Roger Sekera rode with me Friday morning to operate on three layouts.

The first was David Ramos's New York Harbor Railroad. Dave has a website for his railroad. I did the St James Terminal Yard Master job. I volunteered this job as it has a special meaning to me. My grandfather had a bakery in Manhattan about 3 blocks from this terminal. It is possible that he received freight from this terminal to use in his baked products. My helper was John Held, who recently retired from Conrail after 42 years of service. He was a fun partner.

That night we had a group dinner a nice restaurant with an excellent buffet.

On Saturday, we headed to Ted Paperin's C&O layout. Ted formerly modeled the WW2 era on his layout, but for this session we were operating in 1951, mostly so he could run his streamlined Hudson engines on the George Washington. My first assignment was to take a coal drag from Handley to Hinton using a H-8 Alleghany locomotive as power. I had to do some switching on the way at Sewell and Thurmond. My favorite steam loco with a 30 car coal drag. It doesn't get much better than that.  Next, I ran a pusher engine from Hinton to Alleghany. In the afternoon, I worked the Mann's Creek Narrow Gauge railroad.  That night was another group dinner at a local restaurant.

On Sunday morning we ran Tony Koester's Nickel Plate  Railroad. Tony's railroad is nearly fully sceniced, a remarkable achievement given the amount of time he has been working on it. I volunteered for a road job. I got train 41 with 30 cars and a single NKP Berkshire locomotive. The railroad is operated under  time table and train order so you have to know the schedule. The job was made easier as Tony quickly alerted me to the oncoming trains. Nonetheless, I did make an error at one point but it turned out to be moot as the oncoming train was running very late. It took me three real time hours to get the train across the road and accomplish the switching I had to do.

Our ride home was uneventful. It was a fun trip with great fellowship and model railroads. I am looking forward to hosting our New Jersey friends in 2022.