Real ones this time! We had the honor and pleasure of hosting two visitors recently, Dr. Gerard Fitzgerald and Dr. Gabriella Petrick. Both are both history professors. Gerard is teaching a course this year on the history of technology at UVa. He is actually going to make his students read Herman Haupt's book on military bridging. Gabriella specializes in the history of food at NYU. 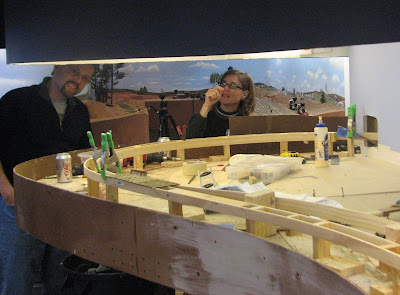 Here Gabriella and I are discussing the optimum height for a valance. We concluded that there is no such thing because people come in different heights.

Gerard remarked that his students at the first class were dismayed to learn that the history they were going to learn will start before the invention of the internet. To put things in perspective, the students in college today have no memory of Ronald Reagan and Mikhail Gorbachev as political leaders. Steam power? Industrial revolution? That's ancient history, buddy where's the nearest WiFi? Since I had several reject sections of the lattice truss left over from the bridge project, I gave them to Gerard to use in his class. I also donated the prototype HO model of Crozet tunnel to the cause. Hopefully it will help his students better understand the evolution of technology.

Gerard is a HO modeler building a layout of a freelanced branch of the C&O near Richmond. He is associate editor of the Seaboard-Coast Line Modeler at http://s-clmodeler.aclsal.org/index.htm He has written for the LDSIG Journal and lectured at numerous NMRA shows. They have a home in Delaware, where the layout resides.

Email ThisBlogThis!Share to TwitterShare to FacebookShare to Pinterest
Labels: Visitors