The Mysterious Buildings of Aquia Landing 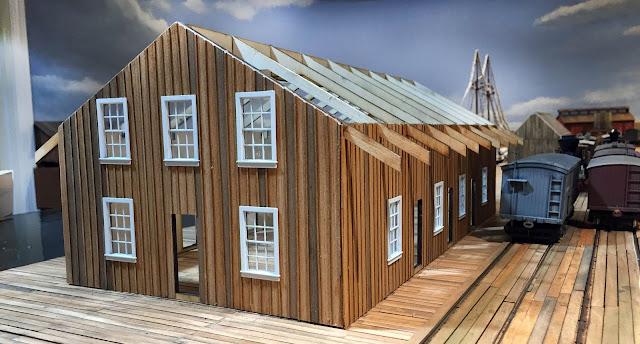 I've been jonesing to build the structures at Aquia Landing, but "real world" stuff keeps getting in the way.

One of the more interesting "real world" tasks was a laser cutting pro bono job for a local middle school STEM class that is doing an aviation project. They need a batch of balsa wood glider models for an aviation class. The plans are available on-line.

I cut 31 sets for them. It wasn't difficult, but it took several nights of feeding the laser. I enjoy supporting STEM education. That's why I've sponsored high school robotics teams in the past and did this project too. I am amazed at the level of technology these kids are doing in high school.


Despite house work, family chores, getting sick, and filling Alkem Scale Models orders, I was able to get a start on one of the warehouse buildings for Aquia Landing. I decided to make a plywood core that I covered with red cedar self-stick veneer. At first I was laying individual planks. But I found if I used a solid sheet of cedar and added the battens one-by-one the  look was the same as if I used individual planks under the battens with about half the work. I'll have to remember that as I do the other wharf buildings.   The windows are Tichy O scale castings.


However, I ran into a question, how to do the roof. In looking at the few photos I have, I'm pretty sure they didn't use shingles. In fact, the photos almost look like tar paper, or painted canvas. What do you think? I don't think they had tar paper in the ACW, so should I go with painted canvas?

I always wondered about this photo. The archives says it was at Aquia Landing, but the brick building in the background had me stumped.   I examined the photo below in more detail and concluded that the "Transportaion" (sic)  tent in the left image was one in the line of tents in front of the red building in the picture below.  The features of the two buildings match, as do the tents. So the mysterious brick building is probably the one I colored in red below. What is the origin of this building and what happened to it, I don't know. But I like the fact that I can add a brick building to Aquia Landing to help add some variety to the mostly wood warehouses.