One of the worrisome aspects of this plan is that the fascia under the bridge will be quite low once I subtract the height of the bridge from track height.  This is because the track in this area has to be no higher that 50 inches from the floor to clear under the stairs.  Obviously, I'd have to relocate the TV, which shouldn't be a big issue.

Also problematic are various water levels. The track at Aquia Landing is 51 inches above the floor, while water is at 50 inches. To model the 600-ft long and 75-ft high Rappahannock Bridge would require the river level to be 32 inches from the floor, while the bridge would be 12 feet long. I don't have room for that, so I scaled the bridge to 6 feet between end abutments and 12 inches above the water, making the water surface 38 inches from the floor.

Would the lower water level here cause a visual disconnect? To get a feel for the situation, I made a mock up of the bridge and fascia with red rosin floor protection paper. I placed a 8-car train and one engine on the existing PoLA benchwork above the bridge mock up.  Then I took a photo of the mock up and used photoshop to enhance the scene with a backdrop and some scenery.

The good news is that the scene seems to work. Because you really can't see the bridge and Aquia Landing at the same time, the geographic incongruity is not that noticeable. To test it out, I asked my wife to look at the mock up and see if she saw anything unusual. She didn't comment on the water levels, but she did ask, "you're going to get rid of PoLA, which everyone likes?" Well, that is the question, isn't it? 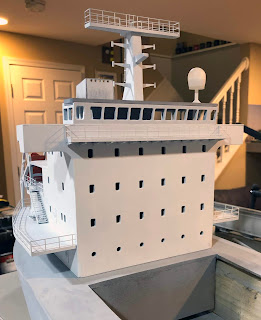 I am leaving the bridge mock up taped to PoLA's benchwork to get a longer term feel for the scene. In the meantime, I've been working on several other projects. I am making slow but steady progress on the bulk carrier for PoLA.   The garage renovation is almost done, and I have been busy with videos and customer projects. I've also been sketching layout plans that would replace the Aquia completely.