A vote for keeping the crew lounge

Last Tuesday I hosted a wargame session in my basement for my friends. It was a fun experience and has me thinking about its implications for my layout redesign and expansion. 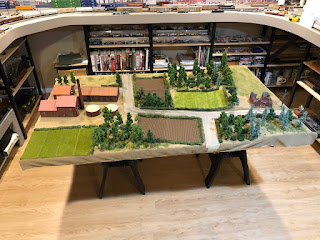 I set up a terrain board using a large piece of velour fabric.  Under the fabric was the 2 inch foam board. I had 2 sheets of 2 inch thick  2'x8' foam on hand, so I used the left over pieces to create a ridge line on one side of the board.

I added lots of trees from Scenic Express and Woodland Scenics. I made some hedges using furnace filters and flocking. For a road, I applied two wide strips of masking tape to the fabric. Then I airbrushed the road with acrylics.  Wargame scenery is different from model railroad scenery in that it must be robust to survive rough handling and has to be reconfigurable to portray different scenarios.

I had some brick buildings on hand that I could use. These were a result of doing some R&D to make brick buildings for a client. (I'll post more abut that later once I have results).  The key to wargame buildings is that the roofs have to removable.  I converted one building to rubble, which was a lot of fun to model.

Overall the board took about a day or so to construct and initially add scenery. Then I took another afternoon to add some additional details. I used mostly ready made scenery items such as plowed fields, grass sheets, etc. To enhance the look, I sprayed some adhesive on the cloth and sprinkled ground foam. This isn't permanently secured. Once the board is taken down, I can gather the loose ground foam and reuse it. This is an idea I borrowed from my late friend, John Hill. He was a master at making nice, temporary war game terrain  boards.

Building the board was a lots of fun. My wife said it was very nice when she came to check on me to make sure I was still alive in the basement. BTW she won't let me have a refrigerator in the basement because she says, "then I'll never see you."

John Drye and Mark Franke came over to play the scenario using the popular Bolt Action wargame. The scenario was a depiction of Kampfgruppe Huber's attempt to cut the main supply route during Operation Market Garden that I had researched and developed. (NB, designing a wargame scenario is a lot like designing a model railroad layout. You take prototype information and apply it in condensed form to your available area. I am personally more interested in the simulation aspect than the competitive aspects of the game.)  John lead the Germans, while Mark had a small British combined arms team of Sherman tanks and infantry counterattacking from the south, and I lead a reinforced platoon of US airborne soldiers from the north, reliving my days as a cadet lieutenant in the 307th Engineer Battalion of the 82nd Airborne.

John was able to cut the road for about two hours (6 game turns) before the counterattacks pushed him back. He was heavily outnumbered, but he had two very powerful Jadgpanzer Assault guns as his main offensive force. Unfortunately, they did not perform well and Mark's Shermans and bazookas drove them off while destroying one assault gun, and taking no loses on their own, though one of Mark's infantry squads ran off after a failed assault in the woods. 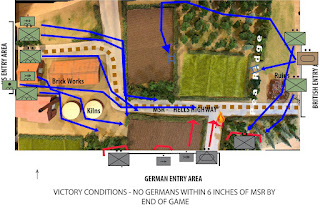 As for my part in the battle, the main action was far from my platoon, so I spent most of the game getting PT as the paratroops ran across the board. We arrived just in time to mop up the remnants of the German infantry and to take some bazooka shots at the German armor.

Overall it was a fun experience. I enjoyed making the terrain board. Since the Aquia Line is winter season, it was fun to make some green terrain again.

So, this raises some questions about how to expand the Aquia Line. Should I keep the crew lounge open so that I can host more games like this? Alicia is definitely in favor of this. Or go all in with the expanded Aquia Line?  Kinda of where I want to go. When I mentioned this to John, who also has a model railroad layout and likes to wargame. He said words to the effect that, "I can use my dining room for gaming, but I don't have political constraints imposed by a wife." I suppose I could use my dining room too, as long as it was  very temporary. There is also the option of using my garage for occasional games.

Perhaps the phased approach to expanding the Aquia Line is the best. Replace PoLA with O scale layout in the same footprint as the former PoLA, then fill the crew lounge in a later expansion.  In the meantime, I get to host one more wargame before I have to strike the terrain board to get ready for an April 6th Op session on PoLA and the Aquia Line.