I drove down to Richmond today to participate in the inaugural ops session on Mike Pulaski's HO scale Mohawk and Hudson Layout, version 2.0. This is the first op session on Mike's new layout. He has been working on it for several years and has made a lot of progress.

It is a double deck, point-to-point layout depicting a freelanced line in upstate New York that Mike calls the Mohawk and Hudson. The line features lots of through trains, locals and a paper mill job. The layout decks are connected by a large helix.

I volunteered for the paper mill job and had a great time switching it. Mike is using a freeware switchlist generator that runs on his mobile phone. It caused a few glitches. For example, the switchlist for the mill did not describe where in the mill the cars were to be spotted. But overall, things worked very well. I enjoyed the mill job and the tracks well well thought out and there was plenty of room to run around the cars without getting on the main. 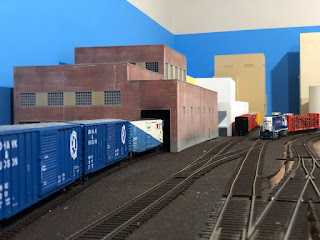 The paper mill is a work-in-progress, but it is already an impressive scene on the layout.  Mike does a lot of custom painting and his locomotives and cars are painted and weathered to a high standard.

I posted a short video with some scenes from the day's activities.


After the op session, I visited the Malvern Hill Civil War battlefield site. This was the scene of a bloody tactical defeat of the Confederate army under Robert E Lee. The rebels assaulted the Union Army of the Potomac on a narrow plateau of about 900 yards wide and several thousands yards long. The plateau stood between two rugged ravines and swamps. The Union had arranged their artillery here in a dense concentration and it slaughtered the rebels as they advanced.  One Union artillery battery fired over 1200 rounds.  I have a much better appreciation of the terrain having walked a large loop around the battlefield.  It's hard to imagine why Lee thought this attack would work.  It was a killing ground.

Nevertheless, Union General McCellan was convinced he was outnumbered and decided to stay in this position, essentially trapped against the James River. He eventually withdrew via ship to Alexandria in time for the Second Battle of Bull Run.