It's Still Winter in the Alleghenies

When I left Virginia on Friday the air was warm, the birds were chirping, the grass was greening, and the magnolia trees, cherry trees, and daffodils were blooming. So it was a bit of a shock when I headed west to Greensburg, PA for the RPM East  and was greeted by freezing temperatures and blowing snow squalls as I crossed the Allegheny ridges.  I made it safe and sound to the meet and even made a stop at my favorite hobby shop, Mainline Hobbies Supply in Blue Ridge Summit, PA, to stock up on scratch building supplies. 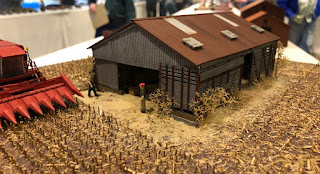 The RPM East is an annual event that alternates locations on each side of Pennsylvania. This year, it was the western folks' turn to host and they did a fabulous job. I arrived Friday evening in time to catch a few clinics and set up some models to display.

The model display was not that extensive, but I did see some nice work. Two highlights for me were a diorama of a barn in an recently harvested corn field and a heavily weathered SP locomotive. On closer examination, you could see that the barn was actually made from two box cars covered with a shed. The builder, whose name escaped me, had extensive prototype photos to document the unusual structure. 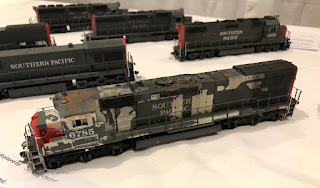 I am a sucker for weathered SP locos, and this one by John Albert, was very well executed. He also had one of the new Scale Trains Tunnel Motors on display. Wow, that was a gorgeous model. They are back in stock too now. It seriously has me thinking about DRGW again.  What can save me?

I did a talk on Saturday evening to a small crowd of folks about my Aquia Line RR. They seemed to enjoy the talk.

In the dealer area, I managed to get some brick chimneys from Randy Broadwater and a T shirt from the Steel City Chapter of the Railway & Locomotive Historical Society  Kevin Varrato and Domenic "DJ" Arlia were there to represent the Society. They both are/were locomotive engineers (Kevin was with the Union RR and DJ is still active with CSX.) Kevin helped clarify some questions I had on how the slabs from a continuous caster were switched by the Union RR. DJ has a YouTube channel and website.

Speaking of steel mill modelers, Chuck Pravlik and Brandon Wehe were also there with lots of cool steel mill model stuff for sale. We were near Pittsburgh the Steel City after all, even if most of the steel mills are now gone.  This gets me thinking about steel mill modeling agains. Hmmm, tunnel motors and steel mills. Can you say DRGW switching Geneva Steel in Utah? 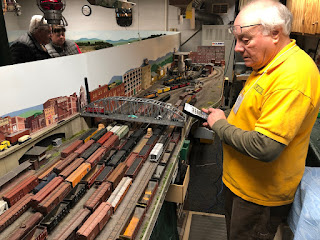 I enjoyed the clinics I attended. Roy Ward talked about the 41st Anniversary of his layout. The next day when I visited his layout, I told him I would have to live to 93 to be able to catch up with him. His layout is very nicely done. He has a small layout room, but managed to design an impressive layout by sticking to 24 inch minimum radius curves. The Cheat Junction scene was the main inspiration for his layout and he did a great job capturing it in model form (see lead photo).


Next, I visited James Pinkney's Western Maryland Tide and East Sub Rail. This was a treat as the WM Tide sub was the first railroad I planned to model before Matt Schaefer got me hooked on the C&O. James is from Britain and works for Bombardier, but is a huge  WM fan. He has a neat representation of Port Covington and Sparrow Point Steel on his 900 square foot, multiple-deck layout.

Don has about 75 percent of the track and benchwork for his freelanced modern NS layout done. It will be an impressive double deck RR when it is complete.


The highlight of the weekend was a stop at Scenic Express's factory and warehouse, where Jim Elster, the owner, gave me a tour of the facility. So this is where the magic happens!  Jim is one of the most creative guys in the field of model railroad scenery. He also has relationships with other leading scenery manufacturers such as Silfor and Martin Welberg. Jim is a great supporter of the hobby and it was awe-inspiring to see the amazing array of products that he offers. Of course I stocked up of scenery supplies too.