In doing some research for an article I am writing, I came across two archives of civil war photos that I had not seen before. Those archives have some images that are new to me. There are not that many photographs of the civil war in comparison to later wars, so when you find some undiscovered images it is a treat.  Especially when one is germane to one of your modeling projects.

The first archive was at the University of  Maryland Baltimore Campus Digital Collection. They have several photos I had not seen before. But the best discovery for me was the photo of Engine Leach from the front quarter view (see above). The link to the image is here. I did not have a nice clear image of the front of the locomotive. This image answers a lot of questions I had on the front details. This image is now the fifth image I have of this locomotive. The caption at the UMBC archive says this note was hand written on the back, "A Famous locomotive in the Virginia campaigns fought for, taken and retaken, disabled and recuperated." 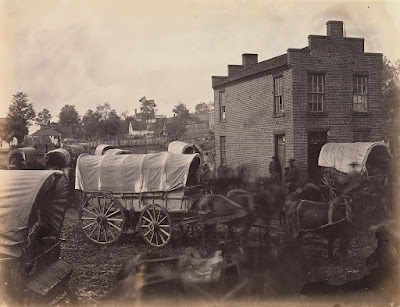 The second  archive was on website for  The Met, which is the nickname of the New York Metropolitan Museum of Art. They have an on-line collection of civil war photos. This image at the left of Culpepper, VA is part of the collection. I don't believe I have seen this image before. There is the link to the image. I did see some captions that were incorrect, so be careful when you read them.