Another piece of the puzzle

In reviewing the copies of the train orders I copied from the National Archives, I noticed the following message dated March 1, 1863. 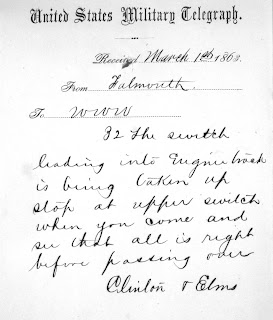 Here is a transcription:

To WWW  (ed. note: this is W.W. Wright, superintendent)

32 the switch leading to engine track is being taken up. Stop at upper switch when you come and see that all is right before passing over.

Since I don't have period map of the track plan for Falmouth, I have been piecing together clues here and there to get some idea of what was there.  This message tells me there was some type of engine track at Falmouth. During General Burnside's command, the USMRR was required to keep an engine at Falmouth steamed and ready to go in case the commanding general needed it. I am not sure if this continued during Hooker's command. I did see some message traffic about a special train transporting General Butterfield, who was Hooker's Chief of Staff

From other messages I know there was a water tank or source at Falmouth as several train orders mention getting water and wood there. Other messages mentioned a depot at Falmouth. I also know that the original RF&P station was burned.  J.B. Clough was planning on putting in a wye at Falmouth, but they never got to it. One by one the pieces come together.