Panel Discussion: "Alexandria and the Civil War: Pride and Shame in Black and White."

Alton Wallace, a good friend who is not a model RRer, but a historian of black history in Alexandria, and I attended a panel discussion last night where Ron Beavers was one of the speakers. The discussion was entitled, "Alexandria and the Civil War: Pride and Shame in Black and White." The advanced billing indicated that Ron would discuss railroading in Alexandria in the Civil War. However, his talk was more about the economic conditions in the city in the antebellum period. It was very good.

For those of you that don't know him, Ron was the tour guide at last year's
ACWRRHS meeting at Alexandria. Last night he was dressed in a nineteeth century civilian banker's attire and looked dashing. With his hat on he could almost be mistaken for Robert E Lee. As I left the hotel, I noticed he was in the hall being swarmed by a group of at least 8 ladies. 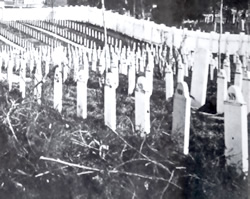 The first speaker gave a good summary of the history of the Contraband and Freedman Cemetery Memorial Park. She mentioned the role that many of these people played in the USMRR construction corps. This is an area I'd like to research more.

It was an interesting night and though not all RR related, still well worth the time.

By the way, Alton (Al) Wallace has written a book about the history of the Alfred Street Baptist church, called,  "I Once Was Young."  I found the chapters on the history of the church before and during the ACW fascinating. They are printing another 2,000 copies and you might be able to get a copy through the church.

Email ThisBlogThis!Share to TwitterShare to FacebookShare to Pinterest
Labels: History