After  mildly disappointing DCC performance during the open house, I decided to move installing battery power to my locos up on the priority list. The DCC problems we experienced related to sporadic electrical pick-up, and difficulty with new throttle initialization. Throw in having to set dip switchs, dense 150 page instruction manuals from both the DCC and decoder manufacturer, and hexadecimal configuration variable programming and I had had it with the DCC. You can tell the DCC standard was designed by a committee, not just any committee, but a committee of engineers. We (the model RR community) need an "Apple Computer" type manufacturer to step up and streamline the whole user process. Stanton S-Scab is about as close as I have found so far. And remember, you can have it cheap, fast or good, pick two. 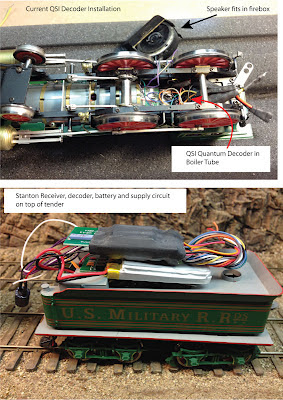 I had all the parts on hand from my earlier purchase of a S-Cab system from NWSL. See here.  As I laid out the components next to the engine I realized that it all was not going to fit in or on  the tender. But I was concerned that putting the decoder/radio receiver in the boiler would hurt the radio reception. I got some advice from the S-Cab yahoo group that encouraged me to proceed.


I took it slow and made sure everything was correct as I went along. First I removed the QSI decoder already in the engine.  I installed the decoder in the boiler, with a speaker in the firebox. The battery and charging circuit are on top of the motor in the tender. I used a yellow LED for the head light. It is not as bright as an incandescent lamp, but may look closer in color to the actual prototype oil lamps that they used in 1860.

I was successful, and now the engine is running great with battery power. Huzzah! Radio reception has not been a problem. The engine runs very smoothly with the steady supply of power. This has been exactly what i expected from battery power. Yes, I am chuffed!

This engine had a habit of shorting at the pilot truck on some of my tighter curves. Since it is a tender drive, I decided to not use any of the pickups in the engine and to only rely on the all wheel pickup in the tender. I had previously added pick ups to all wheels in the tender, so the engine can run tender only if I want. Thanks to the battery I don't need to have all those picks in the engine in service. That simplified the wiring task a bit.

It also sounds pretty good too. Putting the speaker in the firebox helps magnify the sound.

I still need to learn how to program with the S-Cab. but it looks like I will be ordering two more systems. I will keep the DCC system for now, but once I convert to all battery power, it really won't be necessary. Same for frog juicers and powered frogs, reverse loops etc.

The future is here!